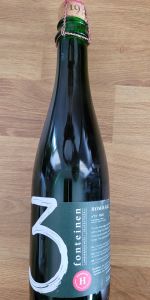 Notes: A blend of lambic beers brewed at 3 Fonteinen, with an addition of 30% whole fresh raspberries from the fabled Payottenland and 5% sour cherries. This unfiltered beer will enjoy a spontaneous refermentation in the bottle. No artificial colors or flavor enhancers are added. Lambic is brewed only from 60% barley malt, 40% unmalted wheat, hops and water.

In commemoration of the late Gaston Debelder, founder of the 3 Fonteinen blendings

Felt an appropriate day to open this, given the news of Armand's recent passing. Ruby red in the glass with a small fizzy head that dissipates quickly. Aromas are balanced between raspberry and cherry pie filling, with a nice lemony acidity from the base lambic. Flavors are tart, a bit less fruity than expected, with more of a raspberry character. Overall I like it, although not quite as much as Framboos

Beautiful strawberry color in the glass, completely transparent if decanted - darker and murkier with the yeast, however, nearly completely opaque. I prefer my yeast be included in my Belgians (for health, of course), but I'm not holding that against the appearance score. Pale pink fizzy head, brief lived, leaving the body completely still.

Extraordinary nose: tart and fruity, but equally funky, earthy, and sharp. Earthy, dirty, mushroom-like funk; raspberry and cherry; oak and must; a great example of the oft-mocked "horse blanket."

The palate has less earthy funk, but it's still there, especially on the back half. Up front, it's a blend of the sharp tartness of the berries and a light white wine vinegar-like sourness. Cherry skins and raspberry on the back third and finish.

Strongly sour, more in line with many American takes on sours and wild ales than most Belgian Lambics, owing at least in part to the sharpness of the berries. Mouth puckering; lingering sourness about the gums. Swishing, swirling, and chewing is almost dangerous. There's no vinegar burn, however.

This is world class, but if more of the funkiness translated to the palate and cut through the sourness, it would be among the best beers I've ever had. As it is, it's easily one of the best fruited Lambics in the world, different in character from Cantillon, but just as good. Perhaps the funk becomes more pronounced with age.

Moderate to vigorous pour yields a 1/2 inch light pink head over a hazy cherry red body with no lacing as the head disappears in seconds.

Wonderful nose of cherry and raspberry with slight funk.

Taste mirrors nose with the funk a bit more prevalent.
Very tart in the best way at the finish.
Wow!

Good feel after the initial appearance.

Overall, a delicious lambic!
Seek this one out!!
Cheers!!!

Pours deep, medium-hazy red with a finger of off-white head.

The nose is raspberry, cherry, lemon, and vinegar.

The taste opens with medium-sour lemon, vinegar, and green olive and finishes with raspberry and cherry. Very low sweetness and medium tartness. The initial pop of vinegar and green olive is somewhat off-putting, but the beer becomes more balanced and fruity as it warms and my palate adjusts.

The mouthfeel is medium for the style. Puckering tartness with a clean finish.

Overall, a very well-made lambic, maybe not my favorite flavor profile at the end of the day but it definitely grew on me. It could use a touch more jammy sweetness to offset the vinegar.

Bracing acidity, with pepper and mild cheese notes quickly overwhelmed by tart fruit. Perfectly blended lambic with nuts, peppercorn, wildflower, honey, and foraged greens emerging occasionally beneath the raspberry and barnyard notes. Some minerality but not too many tannins in the finish, which while dry, isn't puckering.

Milky, smooth mouth-feel - could do with a tiny bit more carbonation perhaps, but it isn't bad for the style.

A fitting tribute - one of the best examples of the style I've had in quite some time.

Another wonderful Belgian Lambic. Love the taste and finish which showcases the cherry and raspberry fruit.

L:. Pours a slightly cloudy ruby red with a medium fizzy white head that dissipates rather quickly and no lacing on the glass.

T:. Tart raspberry, followed by a strong tart cherry, notes of toasted bread and a touch of brett funk. Overly really like the cherry and raspberry character of this beer. Very little sweetness.

O:. I really enjoy the raspberry and cherry of this beer.

Pours a nice ruby red color, translucent with a small white tan head is fizzy and dissipates quickly. Aroma is huge sourness, tart lactic acidity, with a prominent minerality and plastic like funk notes. Tons of fruit notes as well with huge raspberry, nearly as big cherry, and even some strawberry notes (although I know there’s no strawberries in it). Just an absolutely wonderful aroma. Taste is just an insanely huge puckering sourness. This is easily amongst the most sour beers I’ve ever had and I love that. Fruit notes balance wonderfully with both sour and sweet and raspberry and cherry. Some clean mineral drying characters, moderate oakiness, essentially no pungeant funk notes but rather all sour/tart characters; which again I love. Carbonation is actually quite low, I think it’s fair to say undercarbed, although the puckering tartness and drying finish make that low carbonation affect the product less than it otherwise would. Drinkability is excellent and I wish I had more of this. Overall just a wonderful beer.