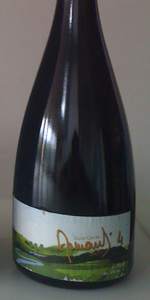 Huge thanks to Mike for splitting this bottle and knocking off an enormous want of mine. Lente pours out bright like tempered, copper pipe, beaming in color with a foamy, fizzling white head comprised of large bubbles that pop and squander away pretty quickly. A few moments later, all that's left is a thin collar outlining this beautifully colored gueuze.

Someone sitting across the table from me was the one who opened the bottle, and moments after the cork was popped, I could already smell this wonderfully funky monster. Pouring it into my glass and bringing it a half inch from my nose was like olfactory heaven. This stuff is funky as hell, and tart like an obnoxious teenager; copious barnyard-like, sweaty funk, tart lemon skins, pears, apples, musty cellar floor, stone fruit flesh... where does it end?

Just when you think you've got everything figured out, you take another sniff and it sends you into another snarl of disbelief. More wet hay and damp cork, indisputable Belgian funk, musky forest and mushrooms and earthiness, with all those clamoring, tart fruits injecting just an edge of acidity for good measure. Probably one of the best smelling beers I've had the pleasure of sniffing to date. Hours after finishing the beer, smelling the empty bottle was like reliving a dream.

Each sip is so deliciously funk and sour, expanding your taste buds to new ends of the spectrum like not many other beers can do. The finish is a fading combo of the same funk and sour that rummages through the rest of the flavor profile, along with an adhering dryness that strips your palate of all moisture. The sharp and heavily carbonated body only accentuates these flavors and really leaves your palate in a constant need of repair (aka, another sip).

Wow, what a wonderfully fantastic beer, through and through. The hype on this one is fairly legit, I'd say. Not often does a beer come along that is so impressive in nearly every facet of the game, but Lente shines bright like a diamond. Good funk, good tartness, good oak, good dryness, and just a good experience all around. At around 40-45€ a bottle, Lente is not a cheap investment, but nevertheless one that any lover of gueuze (or good beer in general, really) needs to make.

Gorgeous, glowing, deep amber appearance. Much darker and more colorful than any other gueuze I have seen. A fluffy, bright white, one-finger head topped the liquid. The head quickly dissipated to a thick, clingy ring. Dots of lacing trickled down the glass.

The nose was remarkable. Incredibly complex and dynamic, and also quite intense. The first thing that struck me was the potent, oaky/barrel character. Very woodsy and earthy. Lots of barnyard and fresh hay aromas. This three-year-old bottle smelled much more aged than I was anticipating. Surprisingly, the acidic/vinegar notes were quite restrained.

The flavor profile was just as impressive as the nose. Strong lemon rind and hay-like notes led things off behind a crackery malt base. Tons of oaky, barrel flavor. Super musty and funky. Intense barnyard notes. Moderately tart. Like the nose, the flavor profile demonstrated restraint in the acidity department. Lots of lemon and lime notes on the back end and also in the crisp, bone dry finish. Woody and somewhat tannic with a fair amount of earthy hop bitterness. All in all, very balanced for the style and immensely quaffable.

Impressive mouthfeel. The liquid had a surprising amount of heft for the style but was still light and fluffy on the palate. Creamy, smooth and supple with a fine, prickly effervescence.

Armand'4 Oude Geuze Lente is far and away the best gueuze I have ever tried and is definitely in my top 5 beers of all time. For such a remarkably flavorful beer of this style, I was mesmerized by its ability to maintain such balace. All in all, a truly memorable drinking experience.

What a nose, funk and plastic and yet incredible. Tart, grassy, lemon zest, perfect acidity. Glorious.

Appearance: Pours a rusty dark orange color with a finger of an off white head that settles to a thin coating and thickish collar. Body is very hazy, but translucent with some light suspended sediment and a good amount of visible carbonation.

Smell: Barnyard funk, hay, musty basement, oak, cheese, green apple, orange. Hugely funky and aroma was strong enough that if filled the room as soon as the cork was popped.

Taste: Similar to the aroma. Medium/high lemon like acidic sourness but so drinkable at the same time. Lots of barnyard, wet hay, pear, cheesy funk, white grape and some mild oak.

Overall: One of, if not the best gueuze I've ever had. The blend of funkiness and fruitiness is excellent. Sourness is there, but still retains amazing drinkability, and the mouthfeel is the best I've ever experienced in a lambic. If you're a gueuze fan, you should absolutely seek this out.

A- hazy brown-orange body, much like a lighter apple cider. Effervescent two finger white head with great retention, nice film and some lacing.

F- Bold and aggressive. Citrus, lemon zest, apple skin, musty hay, black pepper, lots and lots of funk that dominates the palate. Just enough yogurt lacto in the dregs to make me smile. A vinous finish reminds me of a nice champagne.

M- Medium bodied, perfectly carbonated and not too fizzy; nicely effervescent and drinks with a real pop! Funky, musty and lemony finish.

O- I see why many argue that this is the best of the 4. I liked Zomer's subtlety that didn't sacrifice much intensity, but this is right in your face intense and incredibly complex. A lambic for the ages.

Re-review: Drank this alongside the 3 other Seasons today 3/30/2015 in a 3F stemmed glass. Basically, this is equal to Zomer, but it is still more intense and in your face than Zomer. A bit less complexity than Zomer, but easily more interesting than Winter. That being said, Zomer is going to run the distance in a year from now. This is easily a top 3 gueuze for me.

Purchased this bottle along with many others of its caliber for a small group tasting and it was definitely one of the stars! Probably the best Oude Geuze I have ever had! I would buy more of this in a heartbeat!

2011 vintage bottle served in a taster glass and enjoyed on 05/11/13 to celebrate the end of law school. Review is from notes.

Appearance: Pours a cloudy orange-amber color with a finger of white head. Good lacing and retention. 4.5/5

Overall: One of the best sours I have ever had. Shame it took me a year to type this review up. I need to get a bottle.

Cost: Depending on the exchange rate, this one is likely to run between $45 and $60 for a 750 ml bottle (if you can still find it online).

Huge thanks to Phil for this one

Serious props for busting this one out Brandon.
The beer pours a light amber with a foamy white head that laces and leaves a thin blanketing throughout drinking. The nose is very yeasty with a touch of sweetness/sourness. Alas, thr beer is very well balanced; definitely a drinkable sour with a slightly dry, yeasty aftertaste. The beer doesn't go over the top in any way and is easy to consume.
Definitely worth drinking again with a potential benefit from aging...but there's no need to wait.

ARMAND LENTE
A: golden brown. with a center of copper hues like muck. big fluffy, pillowy, cascading head. fat, huge. a head that is an insane temper for lace. not heavily clouded, but streaming at the sides with carbonated lace all around the glass bursting with bubbles. effervescent.
S: citrus pith--grapefruit--covered in pepper, pickled in vinegar and washed in sea water, then finished with honey that halts the flavor from bursting with sour madness. best guess. best glass. unreal.
T: the restraint is unreal: lente has POWER. onset of sour hits instantly, but it's halted by an unexpected sweetness. vinegar, fresh black pepper, granny smith, champagne vinegar, then a pillow of brett/sacch like a fuckin ribbon.
M: tinge. tinge. tinge. the lingering effect is OTHERWORDLY. near assault, but restrains itself and offers a slighter, more mild brett/sacc earthiness that rounds out the body like a pillow, like fat in the mouth.
O: fuck off. this is perfection, mastery.
i want to brush my teeth with this, drink this during a 10k, have this at christmas mass, and bathe myself with it.
an unreal thing that i can't believe exists and once existed regularly.
armand. ARMAND. you goddamn genius.

Nose is incredible - lemon rind, orange pith, sharp funk, burlap, lots of barnyard, yet refreshing and crisp with a hint of hard cheese. Pours a fluffy golden head with decent retention. The flavor is even as complex, with a gently sour and tart, w/ lots of lemon rind, and super funky. Funk emerges as a perfectly balanced mustiness- not acedic, more lactic. Sour and refreshing, yet still pleasently dry. What a fantastic beer!

Reddish orange hue. The nose, mouthfeel and flavor on this one stretch my vocabulary a bit; all I can really say is I've never had a beer that tasted like this, and that its elegance was pronounced. I hope one day I can have another....