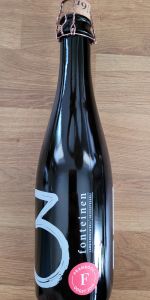 Consumed at LCBS 2010 with great ratebeerians and members of BA

Big thanks to henrik for letting me have the pleasure of prying this from his hands.

A: Pours a nice reddish pink with a thin white head. Lite on the retention and a few spots of lace.

T: Tart raspberry and hints of mulberry. Mild oak with a nice lactic quality. Sour without being too much, a mild vinegar note. No oxidation at all.

M: Nice and crisp, perfect carbonation, with a nice tartness from the middle through the finish.

Those who say this one is past its prime are wrong.