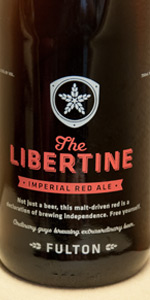 No freshness dating on the bottle.
This is the first of the new Fulton 750 mL release.

A= Pours a thick syrupy looking deep amber color with a thin skin of head on it that holds nice retention for being a thin skin and leaves a sprising amount of lacing.

S= The smell is a nice balanced sweet malty aroma with a little bit of a hop bite to it.

T= The taste is again a nice blend of malt and hops. It almost has a nice sort of roasty malt flavor if that makes sense. The hop bite is just enough to be noticable but it doesn't play an overpowering role. Most reds are on either end of the spectrum but this one falls neatly in the middle. A solid sweet malty base with whisps of hop presence. It actually tastes like a the individual ingredients in beer. It's strange in a way.

M= The mouth is a little more carbonated than I would have liked.

O= At first I was a bit turned off by Fulton's beers. This somehow falls into the same realm as the other beers I've had from them but it is somehow sort of warming and nice. They aren't making beers that are going to blow your mind or over the top envelope pushing beers but they do make solid well balanced examples of the styles they brew. The beers they make I think are extremely drinkable making it great for someone whom is just starting into craft beer while staying subtle enough to let a craft beer enthusiast stay interested. This beer is no exception. The geek in me is underwhelmed but the beer lover is excited for how "to style" this beer is and the balance is amazing. It's super drinkable and a lovely beer. Try this out and don't be as close minded with Fulton as I have been previously. Maybe I'm just now "getting it" when it comes to Fulton but this is a beautiful beer.