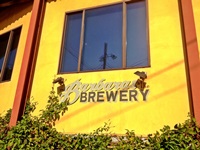 It's fairly spacious with seating mostly inside and some tables in the patio. They had 15 taps, mostly local, but good quality. Had couple of monitors with sports on.

They have a food menu with typical bar offerings. I had their daily special today, the chicken pesto. It was a bit salty but tasty.

It's a nice place to visit for food and beer, if you live, work, or go to school in the area.

4.14/5  rDev -6.5%
vibe: 4 | quality: 4 | service: 4 | selection: 4.5
I stopped in at Barbara's tonight since I was in the area. It's a somewhat hard to find spot with a weird parking situation. Inside there is an open area with some tables and whatnot that is separate from the bar area which also had some tables as well as bar seats. There were 15 taps of beer of a wide variety of styles along with some bottled and canned beers. They also serve wine and liquor. Service was good for being a bit busy. The quality of beer was good and beers were served in appropriate glassware. Prices were a bit high for pints but nothing too ridiculous as far as LA bars go. Worth a stop if you are in the area.
Sep 29, 2012

Reviewed by ghetto90007 from California

The deal at Barbara's is this. They've got about 15 taps. They install a variety of brews and when a selection runs out they rotate something else in. That's pretty fun. For fun, I've included parenthetically where these are brewed.

An interesting assortment. Most are California brews. Craftsman is in Pasadena and Nibble Bit Tabby is in Downtown LA - that's about as local as it gets.

They keep previous tap heads along the wall and upon a brief inspection I can attest to their carrying some really good stuff on a regular basis. When they bring a brew back, they just pull down the tap head.

Now, the adjacent brewery used to be a PBR brewery. And according to the bar staff, they had PBR on tap for $2 for many years. They finally went to just cans of the stuff and retired the PBR tap head permanently. It is on the wall just behind the bar in a miniature coffin.

On the non-beer considerations:

Barbara West Catering, as it is now called, is an interesting place. Literally off the beaten path. Not only is it in a less-frequented end of downtown, it is nestled back amongst industrial complexes and lofts down a side street. I know LA, and especially the downtown environs, quite well, but I had to do a little exploring around to find this one.

Which is all pretty cool. I would only post a review about a place like this on BeerAdvocate - not any other restaurant or bar reviewing site. I think I can trust beer advocates to come and respect the place.

Clientele is a mixed bunch. Nearby loft dwellers (some of the older lofts in town - they were here before the recent downtown "renaissance"). UPS employees from the adjacent facility. USC Medical School students still in their scrubs. Some cops. A dude that looked like Jerry Garcia.

Digressing for a moment: the UPS guys are a fun bunch, but God bless them, don't have much of an appreciation for the beer offerings. I'm drooling over the dozen or so taps in front of me trying to settle on just one or two; meanwhile three bottles each of Bud Light and Amstel Light come across the bar in front of me. To their credit a couple guys in their party did seize on the North Coast Scrimshaw Pilsner. I'm not trying to be judgmental or condescending, I'm just trying to imagine the worldview I would need in order for a Bud Light would be preferable to their offerings. But as I said, I digress.

The food is forgettable, but decent.

Reviewed by purplehandofgod from California

5/5  rDev +12.9%
vibe: 5 | quality: 5 | service: 5 | selection: 5 | food: 5
Barbara's is one of the best bars in Los Angeles currently. Kept very quiet and mostly frequented by locals in the art lofts surrounding it. It's got a totally cool vibe going on, not usually too packed, great service, and an awesome outdoor patio that's secluded by plants. The beer on tap is always amazing. With 15 taps there's always a good IPA, more than one amazing Belgian beer, Hefeweizen/lighter lager, a rare beer(the sour i tried boozed me) and more. It changes weekly and with much variety. Plus the beer managers knows his stuff and picks great beer! I never leave unsatisfied. There's also tasty food that's not overpriced and the specials board changes everyday. Its an great place to come hang out with friends and family and have a good time. If you can make it for happy hour Mon-Fri 4-6PM then you can catch a real deal!! Right off the 5N. Check it out!!
Jul 03, 2010

Reviewed by seldomsthirsty from California

3.98/5  rDev -10.2%
vibe: 4 | quality: 4 | service: 3.5 | selection: 4 | food: 5
i have been going to barbs for 6 years and im afraid my little joint is about to go public. first thing is the present bar manager is great and he is getting his hands on what ever he can and rotates often. PTE went in and out in 3 days. ask him to mix you two beers together you will not be disappointed. the service is from the bar only so ya got be aggressive. the food is good but order of the specials menu and you cannot go wrong(tilapia for $12) happy hour is $3 pints from 5-6. the place is hard to find and pretty much locals and UPS drivers, USC students and hipsters from the lofts but its a very chill/lax atmosphere with good music and some sport on the telly. they did get rid of pabst blue on tap but the tall boys are still their(an homage to the old original space) they do plan to double the present tap system soon! nice selection of sours too. i would like to tell you stay away for fear of MY PLACE getting over run but it is a sweet lil gem thats tucked neatly away from prying eyes so...good luck.
Mar 12, 2010

Reviewed by itsalljake from California

4.4/5  rDev -0.7%
vibe: 4 | quality: 4.5 | service: 4.5 | selection: 4.5 | food: 4
This is my neighborhood watering hole. It always has some characters in it because it is in the middle of an artist colony known as "The Brewery". Sadly they do not make beer here anymore. It was the first brewery in LA, Eastside Brewing Co. Then years later it was the Pabst Blue Ribbon Brewing Co. It has been an artist colony for over two and a half decades now. Barbara's has been here for the later half of the time frame and graciously sustained the resident artists with good food and cold beer. Over the last year however the bar manager has step up to the plate when it comes to ordering beer for the taps. Limited to only ten taps PBR (the old stand-by) was the first to go, others are following suit. Currently on tap Newcastle (the only mainstream left) Moretti, Port-Mongo IPA, Craftsman Heavenly Hef and Honesty Ale, Ommegang-Rare Vos, Dogfish Head 90 Minute IPA, Knuckle Sandwich IPA, and a Stout I can't remember (I don't drink stouts very often) There's also a rumor that they are adding 5-8 more taps as well so that they can keep the varieties coming in larger numbers. The beers they have now are good but I guarantee the whole line-up changes in a week. Beer lovers come here and if they like something it's gone in 2-3 days and unlikely to return until next season. If you live in LA or just passin' through (you can see The Brewery from the 5 FWY, it's right next to it before downtown) stop in and have a beer with me. I'll be drinkin' whatever Port brewco IPA they have. Oh yeah, almost forgot, they also have an extensive collection of small batch hand crafted specialty beers in 22oz. and 750ml.
Feb 26, 2010
Barbara's @ the Brewery in Los Angeles, CA
Place rating: 4.43 out of 5 with 17 ratings