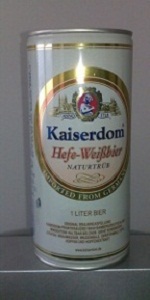 Poured out a clear, orange color with a two-finger, head of bubbly foam. It smelled fruity and a little yeasty. This is a fruity hefe with a nice wheat taste. Nice but it misses that banana-like flavor I expect in a hefe.

L: pours a cloudy yellow color. Gives a decent top of head when I pour, but it disolves very rapid.some lacings on the side of the glass.

T&F: starts of sweet with banana flavour,light malts in the background, Inn the middle I sense more of the cloves. Finishes of with slightly dry. Very watery in the flavour and with almost no aftertaste. Flat mouthfeel

O: a kind of boring hefeweizen in all the aspects. Is much better examples of the style out there. I had no problem drink it, but I would pick an other if I had the chance.

From 0.5l bottle. Hazy dark golden color with off-white head. Aroma has sweet wheat malt and banana esters. Taste starts slightly sweet and malty, continues with some sugar, yeast, a bit of cardboard, finishes with some booze. Light, effervescent body. Overall it's not as good as other classic examples of the style but it's not really bad either.

1 litre can poured into a weizen glass.

A:
Hazy light amber color, it yields rather small foamy white head comparing to Weizen standard with not much of retention. The head sinks to thin everlasting foamy sheet on the surface with some sticky patch of lacing on the glass-side.

T:
Banana ester, clove spice and some phenol can be found here. You also get wheat twang, malt sweet, some tartness and citrus too.

O:
Average Weizen but a bit flat and lack in some depths, no worry it is drinkable anyway.

1 litre can from a Tesco in Koh Samui, Thailand.

Banana esters mingle with wheat and subdued clove in this by-the-numbers hefeweizen. Shallow and simple, though not imbalanced (even if the banana does come on a bit strong, and is overt to the point that subtlety is out the window from first sip).

Not a bad hefeweizen per se, but one does expect better from a Franconian brewery. Not a brew I'm eager to buy again, but it's passable within its style. Certainly drinkable, though not to the extent you'd hope for in a beer sold by the litre.

This was a decent beer - I'll say that first. I get this one in China every once in a while as it's available as an import beer in some places. I do enjoy it, but it's not incredibly smooth. The aftertaste also leaves something to be desired. I would say that the wheat-beer flavor is decent and the appearance in a glass is great. Unfortunately, I'll just have to go with decent on this rating as opposed to good or great.

Pours a nice cloudy liquid topped with a thick head that lasts. Comes with a good yeast smell and feels very smooth, slightly creamy. The taste was okay, not as flavorful as other hefes.

It looks like and smells like a Hefeweizen but once you drink it you will realize that this German beer taste water down and taste more like a radler with water as the lemonade. With that said it is ok to drink on hot day when you are not looking for a good beer

Pours cloudy yellow with decent white head, retention not bad, lots of bubbles moving to the surface. Aroma of lollipops and banana. Taste is a bit watery, other characteristics are standard for weizen. Sour a little. Mediocre.

I live in North Cyprus and the local beer availability is pretty poor, mostly the usual rubbish Euro-Pils, so the sudden appearance of four beers from Kaiserdom comes as a very pleasant surprise.

The current Weissbier pours out with a pleasant pale-orange colour, with a decent inch of head that doesn't hang around for too long. It's cloudy, but not overly so.

Feel... not too gassy. Quite satisfactory.

A: cloudy yellow like other beers in the style.

T: It's like other Weissbier but with more water, this beer is refreshing but lack the flavour and complexity of the style.

M: Refreshing with lots of carbonatation which give a spicy feel on the aftertaste.

O: This isn't a remarkable beer, it is like a american adjunct lager of the weiss style, cheap in price, cheap in quality.

Hazy pale golden color with a good head and medium retention.
Aroma of yeast and banana, sweet oranges and a bit of cloves.
Refreshing taste of wheat, some hops and banana and citrus. Nice that is not so sweet.
Light body with good carbonation.
If you consider this a lighter option to more traditional Weiss, being less complex and intense but also with higher drinkability and still without off-flavors, you will be satisfied otherwise you may be disappointed. Also, it has a very fair price.

At 4.7 abv this is one of the "easiest" beers I've ever had. The alcohol taste of this beer does not overwhelm even after having 10 or 11. There is a definite presence of citrus, possibly banana that tames the beer to an almost a watered down effect that does not actually diminish the beer. Super cheap, bought at a grocer while visiting in Italy and we went back for more. Easily tops the cheaper international beers in my opinion. Poured and maintained a very cloudy yellow, and the foam had a decent life span for such a cheap beer.

I live in Korea and the beer selection at my local supermarket is not great, but as a matter of course I'm working through all the imported bottles.

Okay, if you've read the other reviews you're not going to bother with Kaiserdom anyway, so I shan't go into detail. Basically, it has the typical weissbier flavour but whereas say, Paulaner is pleasant but muted, Kaiserdom is just pure insipid. Virtually no flavour. Just don't bother.

I got a liter sized can at a Walmart in Beijing. The can looked like it had been through quite an adventure to get there. The first pour produced an inch and a half of white head. The beer itself has the color of peach nectar, but none of the viscosity. Sort of cloudy, pinkish, pretty odd for beer.

The aroma does not have much complexity to it. Pretty much just banana. The taste is fruity, like the smell.

Not really what I'd think of as a hefeweizen. Not a lot of yeasty or bready flavors here. Drinkable though.

Looked almost like a crystal Weiss it was so clear, only a very slight haziness in the golden yellow body. On top, a mountain of snowy white foam.

Disappointing aroma, no vanilla, banana, yeasts or anything else to be honest. Hints of grains maybe, but not at all what I expect from a Hefeweizen.

Fizzy water taste, with a minor metalic feel as the mouth dries: this is a very poor beer by any standards.

I hate throwing anything away, but this nearly went down the sink. I managed to drink it however by eating a Pork Pie, Pickles, Cheese, Bread and a small packet of crisps!

Appearance: Very pale yellow, slightly hazy. Not cloudy, as the style should be. I coaxed a finger of head, but I didn't have the power to persuade it to stay around. It was gone in less than 30 seconds, leaving a pathetic most-of-a-ring of bubbles. So unlike what I thought a hefeweisbier should be.

Smell: There is a smell. Faint, but it is there. Very slight odor of cloves and less of bananas. Disappointing.

Taste: Well, it does remind me of a hefeweisbier. It reminds me that I would like to drink one tonight. A bit of malty sweetness, and a hint of cloves, but no banana esters. At least the taste is closer to style than the smell or the appearance were.

Mouthfeel: Lots of carbonation. Too much carbonation. Light in body, this beer is like a super-gassed, watered-down version of a wheat beer.

Overall: What a disappointment. I do like good weizenbiers, but this is not one. On the other hand, there is not anything flat-out wrong with this beer as a beverage; it is quite drinkable, maybe even refreshing. But judging to the style, this one is not even close. Would I have it again? Yes, but I would never drink it if I actually wanted a weizenbier.

I bought this can of Kaiserdom from FreshMart. It was produced September of 2010 and the label says it's good until March of 2012, if the world doesn't end by then.

Pouring into my pint glass, the colour is a perfectly clear golden yellow, which then slowly transforms into the hazier pale yellow with the addition of the sediment at the bottom of the can. There is some head, but not too much.

There is very little smell on this one. You can just barely make out that wheaty aroma that's usual for this type of beer if you stuff your face right into the glass and snort like Al Pacino in Scarface.

For some reason this is a rather carbonated beer, personally I'm used to wheat beers being less tasting of soda and more tasting of ...not soda. As I've mentioned in my other reviews, I'm not a fan of too much carbonation, especially in beer types that don't usually have it.

The flavour really tastes like a watered down wheat beer. Perhaps this beer is the mutant offspring of some North American macro pilseners and German hefeweissen after one night stand. Who knows.

The bottom line is, it's not very good compared to other hefeweissen, and only mediocre in the grand scheme of things. I probably won't be buying it again.

Taste is muted and watery sweetish wheat, some hints of yeast. Mouthfeel is light with almost no carbonation.

Overall, a disappointing beer, I would not buy it again.

Moderate clove phenols with light banana esters is what makes up the majority of the aroma. Some light, musty wheat comes through along with a mild tartness. Suitable but not great.

Crisp, tart and wheaty. There are some clove phenols but next to no banana. Not exactly a classic weissbier as it is lacking in the spicy, fruity yeast character that should be here.

A light, crisp beer. Not really a classic but certainly drinkable even if I'm not about to buy it again.