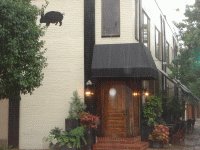 View: Place Reviews
Recent ratings and reviews.
3.36 by Lurkerson from Pennsylvania on Apr 17, 2015

Food was okay, beer list was okay, and I thought it was overpriced

Pub & Kitchen is what most people these days would term a "gastro pub", located on the SW corner of 19th & Lombard streets.

The decor is minimalist-moderne with lots of wood: a wooden back-bar, a completely wooden bar, wood stools, a wood bar rail, and wood floor. Even the minor decor along the back bar is mainly just wooden casks. That's all very nice, but where the design falters is in the additional details such as the lamp shades above the bar and the sconces along the walls. It seems they were trying for a bit of the "industrial" look that's so popular these days but became entranced with whatever cheap crap they found along the way. The use of "Edison" bulbs gives a nice, soft lighting to the space, but they're not really visible - which is, let's face it, the main purpose of the "Edison" bulbs. So, no awards for decor, but it's not exactly unpleasant either, and there are some very nice accents along the way as well (the painting at the top of the stairs leading down to the water closets for example).

I counted 12 taps but only 10 were offered, ranging in price from $5 to $9. I had a Sprecher Winter ($5) and a Stone Sublimely Self Righteous Ale ($8), both served in 12 oz. medium sized tulip glasses. Some of the other draft offerings included Stoudt's Amber 25, Port Brewing's Mongo, Sixpoint Pale Ale (as their house beer), and Allagash White. They were out of an Imperial stout, which would have given them a fairly dark-laden tap list, but given that its winter I thought that was fine, and found their line-up fairly well-balanced.

They also have 8 bottled offerings ranging from $5 for an Amstel, to $9 for a Julius Echter hefeweiss; and 4 cans from $5 to $10 with Oskar Blues' Ten Fidy taking top honors for price. There's nothing really special going on here, and their taps seem to be where their focusing their attention.

The food changes week to week, I believe, which keeps everything fresh. First up for me was an East coast West coast rivalry going on between the oysters... $14.50 for a 1/2 dozen East coast, versus $18.00 for the West - hard to decide! And certainly too expensive to have them go head to head right in front of you ;) Cheese followed with a choice of 3 or 5 at $16 or $25 - keep in mind you're not getting much, so 3 is just a smattering. I didn't try the soup and I forget what it was (sorry) - $7. Salads are in the $9/10 range. Entrees: Fish & Chips $18, Roasted Arctic Char (it's like a salmon crossed with a trout - I had to ask) $22, Chicken Breast w/ brussel sprouts $19, Braised Short Ribs $23. Sandwiches: Pork Shoulder w/ bitter greens, mustard, and cheese $13, Burger with bacon, onion, and cheese $18. So, regarding the food, I'll make it known right now that I'm a cheap bastard. But I also find that you really do get what you pay for (most of the time anyway), and I think Pub & Kitchen delivers.

I think the service could be improved, but I'm quite discerning. What I'll say is that it's on par, and that you won't get much better within the "gastro pub" level. You won't get any better service at The Spotted Pig, for example, but I'm still going to stick with a 4 because I think that in general servers can be sharper if they just put out a little bit more effort.

Overall it's quite nicely done and charming. A bit more decorative flair might be nice, but at the same time when it's crowded that doesn't really matter. And it will become crowded, so do yourself a favor and try a weeknight or an early Friday or Saturday (say 5 to 6:30). With two beers, an appetizer and an entree, figure around $50 - 60.

I've been to this quaint Rittenhouse neighborhood restaurant a few times and though that it was time for a review. The space on the corner of 20th and Lombard so it is very narrow but s pretty lengthy with a decent sized bar and ample seating for dining. Pretty dark with lots of woodwork an earth tones and the place is nicely decorated. Beware, this place doesn't have their name on the sign just a silhouette of a pig.

I've never sat at the bar but the table service is usually pretty good. The staff is friendly and knowledgeable about the menu and the beers that they serve and. The preparation of your food can be ungodly slow but t s worth the wait. You should visit more for the food than the beer because the selection isn't all that great. A ecent rotating draft list consisting mostly of locals an easy to find beers and a mediocre bottle list.

The biggest problem with this place is how expensive it is. Sure the quality s good, but as a couple, a few drinks, an appetizer an to sandwiches will end up being well over $100. Their cheeseburger is $17! Granted t comes with gourmet ingredients but that is outrageous.

Nice looking, smallish establishment with low lighting, a long bar and a section of tables in the back for dining. The dining section was packed. Also there are a few small high top tables opposite the bar, and outdoor tables lining the property.

It used to be Chaucers. If you go downstairs to use the bathrooms, there is an engaging display of framed photos which document P&K taking apart Chaucers and rebuilding it.

Under 10 taps but they also featured some bottles. I had one of my favorite beers rarely on tap, Sixpoint Bengali Tiger IPA. I had two pints, they were delicious. They also featured a Prism beer, Allagash White, plus more.

It has a more romantic vibe than Tenstone or Grace Tavern or other bars in the area.

I'm pretty excited to be the first to review Pub and Kitchen, especially since I was the one who requested BA to add it to their site!

It's a great spot between Rittenhouse Square, and the Graduate Hospital neighborhood. Nice location far enough away from overpriced, and underwhelming Rittenhouse, yet close enough to plenty of other Philadelphia attractions.

Has a nice, classy, sort of English pub feel to it. But, not nearly as nice as the beautiful hostess that greets you at the door. She alone is worth the trip to Pub and Kitchen.

Beer selection is decent. They usually have about 6+ good beers on tap, and I've had a couple on nitro. The beers vary from some English, or Scottish ales, to some American micro, and craft brews, both local, and from across the country. They also rotate new bottles in frequently, so, while the selection may not be large, it does change often, so you can get your fill here.

The food is very good. They have the good typical bar food, burgers, fish and chips, pulled pork sandwiches. They also have a good selection of meals, with new specials nightly.

Overall, the Pub and Kitchen is a nice place to relax, get a good pint, and have a tasty meal. They have some outdoor seating when the weather is better, as well.