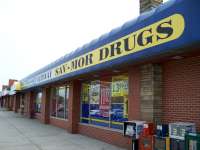 View: Place Reviews
Reviews: 8 | Ratings: 11 | Log in to view all ratings and sort

I was kicking around BA for local stores in my area with a good selection of craft beer at a good price and stumbled across this drug store. There was a great selection from domestic to import, six packs to bombers etc. . Brandon the manager was great and talked beer with me for at least 20 minutes and even hooked me up with a fresh cold six pack of Lagunitas sucks brown sugga that he went and got out of the back cooler for me . Pricing was great on all beers plus make your own six pack for 9.99 or buy a single of anything he has on his shelf. If you live in Michigan or are traveling through stop here,you will not be disappointed with the beer available or the service. Ill be back for sure

This place is hidden in Eastpointe, and I'd've never found it without the help of BeerAdvocate, so thanks to those that have suggested it. You would never think this little place would have such a nice selection of craft beers.

I walked in and there were very few people there... mostly elderly people. I walked myself to the back near their beers, and they had quite a number of them. I quickly turned my eyes to the 4x4 "$2 Bottle/Mix a Six" section where they had three shelves of brews made in Michigan, a couple made around the country, and then imports on the bottom. A guy by the name of Brandon asked me if I needed help, got me a sixer holder, and gave me suggestions of what I should get if I was buying in-state (which I was). He was super helpful, knowledgeable, and was a nice guy. I then got to choosing.

Like I said, several shelves across and high of beer are here. Many of them are in pre-packaged sixers, but there are also a lot of singles to choose from outside of the $2 bottles. On the "$2 Bottle/Mix a Six" shelf I mentioned that there was no Red's Rye PA from Founders, and he quickly took one out of a six-pack on the other side of the shelves and let me take it. Are you kidding?

I should also note that if you do choose to get a six-pack of $2 beers, they charge you $10 rather than $12, which makes this an extremely fair place to get some craft beers you want to try.

I'll be going back any time I want beer, as it's the closest place to me, and it has a nice selection.

P.S. The last Friday of every month they have a free beer tasting.

Fairway Sav-Mor Drugs is a hidden gem of a craft beer store. As noted in other posts, you'd never know the great selection they have inside from the road, as it is located in a strip mall & is, after all, a drug store!

Once inside, head towards the back & ask for Brandon. You won't find a more helpful & customer friendly manager at any other craft beer destination in the area. He knows his beers & is an absolute pleasure to talk to. I've never seen a larger collection of different craft beers at a drug store, and Brandon is clearly on a mission to turn his place into a destination point for folks looking for great brews at great prices. He is definitely succeeding in that mission & is likely only limited by some of his distributors getting him more product!

Along with having great prices, they also have one of the largest selections of singles bottles available if you don't want to pick up a full six pack of something newly released & would rather give one bottle a chance first.

Go out of your way to stop in - you won't be disappointed!

As another review indicated, one would have no idea from the outside that this old drugstore would have a nice craft beer selection inside. Their stock, based on my experience since my recent descent into the obsession of the craft beer world, holds up very well to the other well-known bottle shops in the area. Because of it's convenience, it has been my go-to shop for the occasional mix a six, as well as a four or six pack of something that I'm specifically looking for.

They do tend to get ahold of some of the limited beers, albeit you almost have to 'like' them on Facebook just to get news of a limited shipment that they may recieve on Mondays and be quick to get there in time, which has been a bust for me so far since these notifications usually come midday and the stock is usually gone within a few hours. Not easy when you work during the day. Aside from that quirk, most of the better Michigan beers are represented, as well as common out-of-staters. And the prices are right on as well.

They also hold monthly beer tastings, usually on a Friday, where one brewery is represented and you are able to sample 3 or 4 offerings for free. That was a nice surprise when I accidentally showed up one evening to find that it was going on, and I was able to mingle with some other fellow BAs in the area.

All in all, I highly recommend stopping in at least once to check it out if you live on the eastside. It's a nice alternative to a long pilgimage to Beer Baron.

The only clue that this drug store would have a whole aisle of craft beer is a couple of advertisements on the window outside. Other than that it appears to just be a local drug store. But the selection inside places it among the best on the east side. Lots of 6 and 4 packs along with a decent selection of singles organized by style. There is also a smaller amount of beer in the cooler, mostly BMC though. Someone has always offer to help every time I was in there, I think they have a couple of "beer guys" working there. They usually have something on sale or a special of some type running. Its real nice to have a place like this right around the corner.

I have been at this place as it grew since I lived for years behind it. They started modestly with a case of something interesting now and then. They kept expanding to hold a few more in their coolers, to a 4 foot section of shelving, to now 20 feet of shelving, an end cap, 2 aisle stands and multiple places throughout. You wouldn't expect to see such a great selection. Prices are competetive, lots of singles (which is great!), and continuously expanding. Staff is great here too, they will be more than happy to help in any way and keep their eye out for beers you want.

Came up from beer-barren Alabama on business trip and was looking for some singles to take back to the hotel. Looked like a run of the mill drug store from the outside, nothing to suggest the selection that was inside. A good portion of the back wall was dedicated to beer, with pretty good amount of sixers and singles. I managed to get there right after truck arrived, so I got a few limited release beers like KBS. Didn't see anything cold, but didn't walk around the store too much.

Probably spent a good 45 mins to an hour talking beer with the store manager, very helpful and knowledgeable. He knew a lot about the beers and breweries, and was willing to give his honest reviews and recommendations. He looked into getting special requests of beer and wine for other customers while I was there. Prices and variety were extremely reasonable, especially compared to a few other stores in the surrounding area

located in a strip mall,kind of a sleeper being that it is a drug store. A great variety of styles and brewers.look for a wide variety of michigan staples, Bell's,Founders,Short's,Arcadia, Dark Horse, New Holland. expect to see all the larger, well known craft brewers....Dogfish head,Stone, Goose Island, etc...one of the major pluses of this shop is the variety of singles. for those that just want to try something without popping on the whole sixer...this is your place....A large variety of bombers available as well...and lotsa of imports available as well....you will be extremely pleased at the prices...best in the area, hands down...the beer guys on the staff are helpful and know thier stuff...with a manager that is particularly focused on pleasing the beer enthusiasts...highly reccommend!