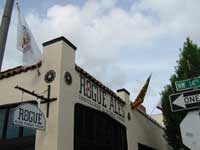 View: Place Reviews
Reviews: 83 | Ratings: 162 | Log in to view all ratings and sort
Reviews by dtivp:

Stopped in after having dinner at a much nicer , probably should have went to Rogue first.
Atmosphere was a little industrial, slightly grungy, cases of beer stacked every where giving you a warehouse feeling. The lay out was different with two separate seating / dining areas. We sat in the smaller area closer to the bar. The bartender came to the table immediately after we sat down. She was very friendly, efficient and knew the Rogue beer menu well. The beer selection was a nice variety of Rogue Beer which is always good, no guest taps. Did not sample any of the food, however, there was a nice variety on the meu.
Overallwe had a good time and it is worth the stop if your in Portland.

Loved the informal vibe of the place. Felt like a local bar. The food was average at best but the beer selection was good. I expected more beers that I could not get in Philadelphia but there was very few.

Went to this taphouse for the first time while on vacation. They have the biggest selection that I've ever seen! 39 beers on tap! Just about every kind of beer you could want. The service was excellent.

This definitely is not the hopping place I imagine it likely was in its prime, but it's still got a chill, almost Irish pub sort of vibe, with a bar section that is far more interesting, and yet cramped, than the seated restaurant-style side. There is a spillover section to the side of the bar extending underneath the rest of the establishment as well.

The beer list is long and wide, including old classics and new experiments, one of which I was blown away by, not only because I was not expecting a New England-style IPA period, but also because it was so well done! They aren't just pouring beer either, but they've got all sorts of other non-beer related offerings, considering their vast toolbox. This is both fun, and dangerous, as you don't go in wanting gin, but then you're a few drinks in and decisions become a little more ill-advised.

Quality is all well and good, but I'd have to suggest that they really get rid of those baseball shaped flight boards, because they're starting to appear moldy, even if it's just stained. They also smell pungently woody, which just interferes with the olfactory experience.

Service is attentive, quick and knowledgeable, including a swift and free shot of Dead Guy as soon as you sit down, just for shits. The food menu is fairly large and varied, and looked decent, but we didn't partake.

I was happy to able to stop by here as I was meeting an old friend who has relocated to Portland (lucky dog..).

The space is long and somewhat narrow. It occupies a corner building and there are outdoor tables on each side. As you enter, the bar is off to your left and the nice sized dining area is to your right.

As with many of Rogues I have been in, the bar itself is small and maybe seats about 10. There are several high topped community tables in the bar area. There was a second dining room near the bar that was closed off and I’m guessing that it is for groups.

Service from our bartender was topnotch! We were greeted with a sampler of their 4 hop IPA which was the sample of the day. She was funny, had good beer knowledge and gave us at least 4 or 5 samples of other beers during our session.

Speaking of beers, they had a vast array of Rogue offerings. They had standards, seasonals, pub exclusives and a cask offering. This is in addition to their line of spirits.

We did not eat this time but the menu looked like the standard Rogue pub offerings which I happen to like.
This location is very close to Fatheads, so it makes for a nice one-two punch.

A biased review, as this is my all-time favorite brewery. The Hazelnut Brown Ale is great at retail but it is better than any beer I have ever had on tap here! Dead Guy Ale is always a good choice. Nice unique setting. 10's all around

Nice out side seating. Good selection. Had rogue's dead guy, chipotle ale, 7 hop, american amber ale, and a shot of rogue's whiskey. service was great, joined the Rogue nation for the discount. Also grabbed so bombers to go.