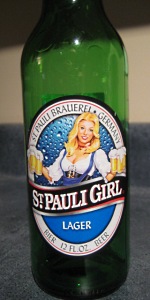 Brewed in St. Louis not Germany. Doesn’t taste authentic at all. Pretty much just like a Budweiser. It’s drinkable ,but wouldn’t buy again.

Look - Pours a dense and fizzy white head that evaporates quickly. Crystal clear, pale yellow appearance with a few floating bubbles.
Smell - The nose is very faint with bready malt and grassy hops.
Taste - Taste follows the nose with some bitterness that lingers throughout.
Feel - Thin bodied with a crisp mouthfeel and finishes pretty dry.
Overall - Not really much on flavor and it burns the back of the throat which reduces the drinkability.

I am no beer expert. I am an amateur at best so do take my scummy St. Louis Irishman opinion with a grain of salt...

St. Pauli Girl is certainly not the best beer ever. It is drinkable but as many have noted not exceptional really in anyway. It is kind of a gimmick too... I am not even sure it is really German and infact I know it isn't because it is brewed in St. Louis Missouri. St. Louis is not in Germany I do not think. If you want a fantastic German beer try a good Hefewiesen. Franzikaner is my favorite.

But I will tell you what this beer is to me at least... and maybe you can make your own judgement on it (which I know for a fact you are going to!).

My family is from St. Louis. My father was the middle child of my hard-working Irish catholic grandmother's six children. I don't know if they drank Pauli Girls in the bars that my Dad and the other kids would play stickball in the alley behind. (stickball is like baseball... but you are too poor to afford a bad so you use a stick instead) but they drank it in Pensacola, when my Dad was learning to fly A-6's in the Navy. He ended up not being a Navy Pilot in the end. That was in the 1980's and President Carter was offering general discharges (not dishonorable) to those who wanted out of the military. My Dad was seeking a purpose in his life, and Navy pilot, even though he loved it, was not it. So he became a carpenter as he always loved building things and I bet they drank Pauli Girls at some point then, because they were scummy St. Louis Irishmen and that is what we drink. He met my Mom, went to school for nursing, I was born, times became tough, my mom and dad divorced, and my dad is now the medical provider for a small New Mexico oilfield town, where he saves lives every day and still makes house calls... he is happy because he is serving others not being served. He likes Belhaven scotch ale the best now, because he is a grumpy old man now and can afford to spend $15 a six-pack on good beer... I hope I get to that point in my life too someday, but I am only 28... so I buy Pauli Girls.

But you know... I do not think that my dad would turn down a St. Pauli Girl if he was offered one... in fact... I know he wouldn't, because when he comes over that is usually all I have!

So raise a Pauli Girl (or a Belhaven Scotch Ale, if we are at my dad's house...) to all the hard-working Irish Grandmothers, Back-alley stickball players, the boys at Pensacola Naval Air Station, and the friendly little Cowtown of Eunice NM... after all... after all, the St. Pauli Girl is often the only girl in the bar that will sit near most guys... so don't be rude to her. Bars are for people and beer both.

Beer is for Man. Man is not for beer.

Take it from a scummy St. Louis Irishman. I would know.

How I rate beers:

Sot scientific but it works for me.

This is a default German Lager that is on PAR with American Lagers. I doubt St Pauli Girl follows reinheitsgebot this might be a German Adjunct Lager that uses German 6 row barely or perhaps 2 row but that is a different story. White head, tasty flavor but nothing to get in a twist about. This beer pairs well with BBQ food. This is a late spring mid summer beer but it is available all year round. "You never forget your first girl" That is true, but this is introduction To German Lagers. This is the miller genuine draft of Germany.

12oz bottle into a tall lager glass.
L: Pours a vividly crystal clear light vibrant pale yellow with a 3/4" white head that dissipates within a minute or so. Decent carbonation with little to no lacing.
S: Grassy, malt, bread, light skunk.
T: Balanced malts & hops, very light breadiness and very light caramel with a hint of bitterness. It is lightly sweet. This beer shakes hands with pilsner style lagers.
F: Brilliant, crisp, light to medium-light bodied and somewhat buttery mouthfeel that is brisk and semi-dry in it's fast finish.
O: Everything about the taste and feel of this German Pale Lager is light. A very well balanced sort of a hybrid European lager that is extremely refreshing and easy to drink. It is very good in it's style.

Mouthfeel:
Light and bubbly, nominal CO2 and easy to quaff.

Overall:
Not bad, Not exceptional, but not terrible. Someone compared this to Brens lager (from Aldi) on here and I had to check it out. They are quite similar. But for about $9 a six pack for "the Girl" vs. $7 for Brens, why bother?

Brewed in St Louis, but brewed to the original German Purity Law, only Hops, Yeast, Malted Barley, and Water. They brought over the master brewer from Germany to set up the brewery. Tastes like the German import, but fresher. Can't agree with the green bottle's, but in the cardboard 12 pack it's protected from light. Think a lot of the imports taste stronger since they're skunked in the shipping. Lagers just can't take the heat like an IPA can, they need to stay cold. Decent fresh lager, and not destroyed like Miller did to Lowenbrau or AB did to Becks.

T: Tastes really nice now that I've managed to find a fresh batch. I never thought the skunk was intentional. There's a plain date on the label, it's not in Julian-code like other Anheuser-Busch specialty products.

F: Light and easy. Beer is made for drinking, and drinkable it is.

O: Even though it follows the German purity law of 1516, it was brewed in St. Louis, Missouri. There are subtle yet dramatic differences in the water sources in American water vs European water. If you can drink a Budweiser or Michelob Ultra and not get a headache, Saint Pauli Girl is for you. If you feel adverse effects with Bud/Mich, I recommend going for something brewed in Munich, Germany instead--Like Spaten or Paulaner, or ideally Hacker-Pschorr or Saint Augustiner, which are admittedly much harder to find in the States.

$7.99/sixer plus tax at a grocer in Metairie, Louisiana. I know I've rated this before in handwritten notes, but I guess I haven't typed those up yet.

Grainy and grassy with a 2-row pale malt backbone...maybe some pils malt too.

I don't taste any adjunct and I find no off-flavours. It's not insipid or anything.

Does tend a bit minerally.

Crisp and clean drinking. Highly carbonated. Not a soft texture.

Drinkable and enjoyable for what it is, but not a standout beer. They push the German angle sheerly for marketing, sure, which is a bit plastic, but it's not a bad beer - disingenuous marketing aside. I've paid more for far worse, and I'd sooner drink this than 90% of the $16+/4x16fl oz can format beers floating around out there these days.

I had not tried it since college days. Thankfully I only bought an individual bottle at the liquor store. Utterly rancid. I took two sips and poured the rest out.

a cheap alternative to heineken!

Bleh...not impressed at all by this bier. I thought it would be better, but I was wrong. Cannot recommend this particular one at all. Flat, no taste, poor finish......just cannot say anything really positive about it.

I used to love Beck's, and years ago with one sip I realized that it had been changed. I saw it was now made in St. Louis, I actually called the number on the label and a guy gave me a very rehearsed, lawyered up explanation. So I switched to St. Pauli Girl for many years. I just brought some home, and they ruined this great brand now as well. Now made in St. Louis and takes exactly like the new crap American made Beck's. And the part that is smarmy is that they still try to present it as a German product. So disappointing, I am going to try to return the unopened case and exchange for Spaten or something.

It is non alcoholic but the flavor and refreshing tang is fully there. It is not flat like American beers, but has depth and the blend of sour, bitter and that hint of a flower that makes it a joy to the mouth. It does not have the more grainy taste of the dark beers, so it is not sweet and is therefore more refreshing on a hot day or after a pizza or other heavy food. A great palate cleanser after garlic also. Knowing it comes from Germany where they do not allow chemicals and other new-fangled methods in the brewing of beer, means we get a clean healthy drink that delights. They have an alcoholic version which is also good if you want the added aspect that alcohol gives, but I simply like beer and do not want that heady feeling and St. Pauli Girl is the best beer without that added aspect.

I like the bottle label artwork. The pour is straw colored in the pilsner glass with very little carbonation. The taste is baked biscuit, sweet grains, malt, faint caramelized sugar, & fennel. Cheers! B-