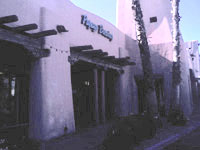 Reviewed by jjayjaye from New York

4.66/5  rDev +8.6%
vibe: 4.5 | quality: 5 | service: 4 | selection: 5
I was really curious about Papagos after i read that it made the 2006 Top 50 Places list. Located in an adobe decor plaza; pretty easy to find. Atmosphere was woody and a little bit on the darkside (which i would look forward to if it were 120 degrees outside...thankfully it was only 88). I am immediately comforted by brewania from numerous well known purveyors of american craft brewing. I pay homage to the two life size ceramic Papago idols then i am drawn strangely to "the light" from the large refrigerator in the back corner mere steps from the bar. I'm doing a sort of double take as i near because i can see that the bar has over two-dozen taps but the labels from the beers in the frig (500?) are some that i've only read about...and they win my attention. Holy cow! i can only hope that my hotel has a frig.

Anyway, the bartender was very knowledgeable and attentive. On tap were an amazing selection of Western/Southwestern craft brews. I was anxious to try a few from the "Home Team". I was fortunate enough to be there for the the Fresh Hopped Aromatherapy that was tapped only days before. I mean "Wow"!! I did a compare with a pint of their Hop Father, which i think is a I2PA. The I2PA was very good and it would be my choice again when the Aromatherapy ran out. This is way out for me, first drawn to the bottles before the drafts then to pick two IPAs when my preferred styles are barleywine & stout. Not sure what came over me, but i like it.

The thing that kills me is that i didn't buy the 22oz of Old Numbskull because of the ban on liquids on aircraft...then to find out later that the rooms at the Golf Resort had refrigerators (missed opportunity). Papagos is the place to hit for Advocates visiting the PHX, AZ area.

This written as much as a review of Papagos' at it is a quick summary of my whirlwind Phoenix, AZ area trip two weeks ago. For a little perspective... after having done the 10+ hour flight_enormous bag-drag_rental car drill, I made a bee-line for a meal at Four Peaks, then popped over for a few pints at Papagos, then made the 50 minute drive (traffic) to Pinnicle Peak Patio (Sonoran Brewing) before heading back south to check-in to my hotel in Mesa (Day One). Day Two, my customer chose Gordon Beirsch for dinner and Day Three was an hour at BJ's after work waiting for traffic to subside then to Sonora's Brewpub, near the airport, for dinner.. back to upstate NY the next day. I get that Phoenix is blessed with a target rich environment... can't wait to visit Tuscon.

3.56/5  rDev -17%
vibe: 3 | quality: 3.25 | service: 3.25 | selection: 4.5
Stop for a pint at the brewery in Scottsdale, near ASU
Facility: lots of parking and ambience is very good, spacious , dark though
Quality is ok
Service: very good service, prompt
Selection: more than 15 beers on tap, multiple on bottle
Food: not applicable
Value: Good value beer
Overall: very good experience but not something to look for

Reviewed by drXploit from Arizona

4.31/5  rDev +0.5%
vibe: 3.75 | quality: 4.5 | service: 5 | selection: 3.75 | food: 4
I went here a few weeks ago when I was feeling a bit depressed, lonely, and basically wanted a drink. I took an uber here, and was greeted by a friendly staff. This place is pretty small, and I can tell that there are a lot of customers who go there daily, just by the way they sat. I kindly asked what their special beers were, and they gave me a huge list, and samples even! I was so pleased with my pint of Irish Coffee Milk Stout that I ended up getting some of their other brewed beers "to-go". The food was excellent, the staff was excellent, the beer was amazing. I would go back. I would even make this my own version of cheers if I drank more... it had that vibe, albeit a much smaller, more modern version.
Aug 11, 2017
Rated: 4.18 by AZBeerDude72 from Arizona

Reviewed by JackDempsy from Arizona

4.05/5  rDev -5.6%
vibe: 3.75 | quality: 4.25 | service: 4.25 | selection: 3.75 | food: 4
A little dark and out of the way and the seating is weird - probably could get more flow with a different arrangement. The two beers that I wanted to try were out, but the ones I did were pretty good. The food is above average for a draft house. They really have a great guest beer selection - probably one of the best in bottles around. So if you want a nice sandwich with a bottle of beer you probably cannot find anywhere else - this is the place.
Sep 11, 2016

Reviewed by JuliusPepperwood from North Carolina

4.44/5  rDev +3.5%
vibe: 3.5 | quality: 4.5 | service: 4.75 | selection: 4.5
Dark dive bar in a strip mall. They have a handful of house brewed beers on tap along with 20 or so guest taps. But I was more impressed with the bottle selection in the serve yourself fridges. You can look over their selection and bring a bottle or can to the bar and they'll open and pour it for you or you can grab a six pack holder and buy some to take home. They had mostly locals, west coast, and Colorado area beers. I was especially siked to see they had Bells Hopslam, Bells 30th Anniversary Stout, Lagunitas Waldo, and Alesmith Speedway Stout chilling in the coolers. The bartender was very friendly and helpful. We had a few beers there and took a mixed 6 pack back to the hotel.
Apr 11, 2016

3.45/5  rDev -19.6%
vibe: 3.5 | quality: 3.75 | service: 2.5 | selection: 4 | food: 3.5
Stopped by at 6 on a Saturday. Place was rather busy but we were able to grab an empty table. The vibe is a bit of frat house or dive bar, which doesn't bother me, but this isn't a slick and modern place. Around 25 beers on tap, most are guest taps. Pricing starts at a reasonable 5.50 a pint with rarer beers going for more. Service was spotty at best, had to flag the server down for every new round. We got a pizza and some wrapped sandwiches. Food was fine but not remarkable. I'd stop by again for a couple pints, but I'd skip food next time
Mar 13, 2016
Rated: 4.13 by OnePuttBlunder from Arizona

Rated by JackiO from Arizona

Reviewed by SaisonRichBiere from Michigan

Rated by Kylo76 from Colorado

Reviewed by MadMaltMike from Arizona