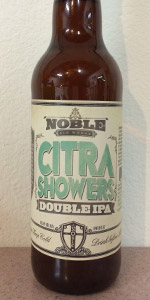 Look: Golden amber. Looks like 90% of IPAs out there.

Smell: Heavy, heavy tropical aroma. Can't pinpoint the exact fruit. Not surprising considering it's a single-hopped with Citra. Has that extra bit of alcohol smell that doubles usually have.

Taste: Grapefruit is the most overwhelming flavor for me. Bitter and sweet. A nice mix of citrus and tropical notes.

Feel: The beer sits on my tongue for a while, and it's nice. The grapefruit flavor lingers, with a nice dry bitterness.

Pours a hazy pale golden orange color with dark straw colored edges and a two finger, pillowy white head that very slow settles into a thick, lasting ring. Very good retention with streaks of soapy lacing coating the glass on the way down.

Dank juicy hop aroma that's bursting with resinous oils and tropical/citrus fruit sweetness. Uber-fresh juicy nuggets with fresh cut grass, pine needle, spruce tip and subtle onion-y summit. The earthy, grassy notes really stand out but are perfectly countered by the sweeter fruit notes. Very tropical with hints of grapefruit, mango, papaya, pineapple and blood orange sweetness followed by a subtle pale malt backbone. I'm picking up a touch of biscuit along with toast and graham cracker but the lighter malt notes do not interfere in any way with the glorious hop profile. One of the dankest, freshest smelling IPAs I've come across. I don't know how the aroma could be improved. Smells amazing!

Full bodied with a blast of dank, resinous hop bitterness that lingers over the sweeter hop notes and subtle malt backbone into a bone dry finish. Pretty much perfectly balanced with dry, grassy pine needle flavor along with some earthy spruce tip and a touch of onion-y summit hops countered by juicy citrus/tropical fruit sweetness. Strong grapefruit flavor along with hints of mango, papaya, blood orange, curaçao and pineapple sweetness before finishing with subtle pale malt and a touch of boozy heat. The malt bill is present in the palate but doesn't hinder the intense hop flavors. Subtle hints of biscuit, bread, graham cracker and caramel. Just enough sweetness and alcohol to counter the intense hop bitterness. There is just a touch of heat toward the end of the palate but it's nicely masked at 8.8%. Deceptively drinkable because of the complexity and delicious combination of flavors. I could drink this all day and wish that I had regular access to this brewery in Philadelphia. An amazing beer that I highly recommend to any hophead. Incredible!

Was lucky enough to pick up a bottle of this from Hollingshead's Delicatessen yesterday. #1 on my want list while in socal on vacation. Into the Bruery tulip she goes!

Appearance. Pours a hazy peachy-gold with over a finger of soapy (almost) white head that leaves some thick and sticky lace.

Smell. Big pineapple, mango, cat pee (I hate that description but it really is there), oranges and grapefruit, and a touch of toasted malt. Actually smells pretty nice despite the crude descriptor.

Taste. Big tropical fruits, getting pineapple, mango and papaya, some sweet orange and grapefruit, a touch of onion and cedar, and some nice flavourful lighter malts.

Overall. A very nice, big IPA with a ton of fresh tasting hops in there. I don't know if this is up there among the best DIPAs for me, but it's a very nice brew no question.

Loads of citrus hop flavors and aroma with intense clarity and an extremely crisp, refreshing finish. A pristine example of a citra-centric double IPA.

Pours a beautiful, clear straw-orange body with an incredibly effervescent, fluffy white head with phenomenal retention. Ten minutes later, there is still at least a finger's worth of head. The lacing is very thick and sticky as well. Looks as an DIPA should.

The smell hit me as soon as I touched the bottle cap with the bottle opener. It smelled straight up citra hops- just like sniffing the citra hop pellets. Very dank, a bit herbal but most of all, very "wet" in the sense that this could very well be wet hopped. A nice spicy rye and breadiness accompanies the citra hops which are present mainly as passion fruit. Very strong nose, maybe not as "clean hopped" as other citra beers are, but this is really, really, really wet.

Flavour is not quite as good as it smells. It's quite similar to Zombie Dust in terms of the flavour profile- a nice strong grapefruit and passion fruit flavour backed up by a solid pale malt backbone. There is a bit of a sharpness to the malt, which makes me think there is some rye. But overall, this showcases the citra hops very well.

This is certainly the weak point of the beer. It's a bit thinner bodied than it should be- at least compared to the likes of Permanent Funeral or Sosus. Yet, it's got solid carbonation and feels resinous in the sense that everywhere in my mouth that gets touched by this beer, starts recoiling from the stolidly dry and bitter backend. It's a very nice bitter passion fruit type of bitterness that stays with you for some time. It's very drinkable but at the same time, you are compelled to take your time enjoying this beer.

This is a DIPA that showcases Citra hops really well. The malt backbone is a little bit less apparent than that of Pipeworks' Citra Ninja which I prefer as it cuts the booziness a bit. The 8.8% ABV is most certainly not apparent at all. I'm impressed with this offering, all things considered and it certainly also beats the likes of Hill Farmstead Double Citra. Noble Ale Works should seriously consider making this a rotating or seasonal beer- they'd have the next big citra hit on their hands. This beer is well worth the local hype that it's getting around here.

I feel like Mr. Arkadin in Orson Wells' masterpiece. I am lost, I am unaware, I am... Citra Showers took me on a tropical journey to far off places, to beautiful places. The beer glows a gorgeous golden hue like a newborn Twinkie, while the taste...the taste! Wow! Luscious Citra perfection. The hot dog thang has a delicate crispness at the end that makes you think that you are taking off Adriana Lima's bra.

Arguably the best IPA in the West

JamLand from District of Columbia

The beer comes in a hazy, very opaque, dark orange.

The beer is a bit less juicy on the palate. Up front, orange and tangerine, mango, peach. In the middle, a light biscuity malt. The finish is of some dank, grassiness, and grapefruit pith. Clean and dry, with a medium minus bitterness on the back end.

The beer is very much an East Coast style DIPA. Similar to Singlecut Bon Bon and Trillium beers. The best DIPA from the West Coast next to Kern Citra.

Clear golden color. White head. On tap. Side by side with juice box and this is crap compared to it.

Bitter and sticky. Resiny. Where is the citra? Grassy and floral.

Not sure how or why this one is rated so high. Tough to drink a lot.