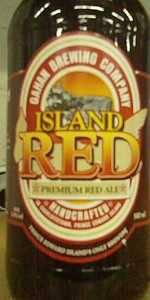 Got this one alone in front of the TV, the 550 ml bottle have been sip really fast. The bitterness of this one is just enough and perfect. Nicelly made by PEI brewing company. I had a couple of their beer and I never been disapointed.

The 5% ABV made it easy to drink. Cheers to this nice beer

S- Deep caramel and a nice roasty malt backbone. No hop bitterness to be found.

T- Lots of caramel up front complimented by a roasty maltiness. Slight hop bitterness on the finish.

O- Nice caramel and malt notes complimented nicely with a light bitterness. I like my amber ales quite a bit hoppier but I found this malt forward Amber Ale to be quite good.

Gahan Island Red looks like a more substantial version of the style; its brick red body is dense enough to obscure clarity and is outlined by rusty, iron oxide contours. Its head isn't overly stout but it is sturdy and leaves a lacing that endures right to the end.

If you ask me, a beer named "Island Red" is the perfect candidate for a tropically, fruity, resiny hop bill. Unfortunately, the PEI Brewing Co. didn't see it that way and, instead, opted to go the opposite route; the aroma reveals exactly zero hoppiness and, instead, a vaguely roasted maltiness.

It's not that I necessarily prefer one style of Amber Ale to the other but if you're going to go all-in on the grains you best ensure a gum-smackingly good maltiness, one that's rich with caramelly sweetness and layered with toasty nuttiness. This kind of unobjectionable, nondescript, slightly-darker-than-pale breadiness simply doesn't cut it for me.

Island Red is arguably Gahan's weakest effort. It's hard to believe this is the same brewer behind fantastic recipes such as the Blueberry Ale, 1772 IPA, and Iron Bridge Brown (to name only my highest rated). This one is more on-par with what I'd expect from a large-scale commercial producer; it is remarkably unexceptionable.

Amber Ale is a style that can spotlight rich gooey malts or piny, fruity hops - the best do both at the same time. The only thing Island Red succeeds in highlighting, I'm sorry to say, is that Atlantic Canada still trails the rest of the nation as far as characterful craft brews are concerned.

On tap at The Gahan House as part of the sampler.
Pours a brilliantly clear red/brown color with a smallish beige head.
Aromas of bready toasty caramel malt with hints of roast and earth.
The flavor is interesting caught somewhere between an amber and a brown with lots of interesting roast and chocolate notes.
I enjoyed this enough that I ordered a pint.

500ml bottle, 5.3% ABV. Another in a rather broad swath of PEI beers suddenly available in Alberta. Big surprise, if a long time coming, really. But what's with the shitty unfocused picture here, eh, Jason?

The bubbles are generally understated, yet duly supportive, the body an adequate medium weight, with the slightest of creamy hints. It finishes well off-dry, the grainy, lightly caramelized malt having the greatest purvey over the lingering muddled noble hoppiness.

Another example of an East Coast Canadian offering deeply set in old world sensibilities. This has well-made English ruby ale written ale over it, and is all the better for it. One of the better red ales made in Canada, or elsewhere, it would seem.

Poured from Gahan's signature 500ml bottle into a Dogfish Head Signature glass. Split with mrmarmot. Thanks to my buddy Chris for driving this back from PEI.

A: Crystal clear burnt copper color. Half finger head on a mildly aggressive pour. Little to no lacing.

M: Well carbonated, a touch on the thin side.

Pours red with a wispy smallish head. The smell is grainy with caramel and field berry notes and a one dimensional sweetness. The taste is malt forward with dark malts at the forefront. Nutty, approaching coffee like flavors are evident. Sweetness is a little unchecked, with a nearly cloying finish. The mouthfeel is lightbodied and sparsely carbonated. the finish is sweet with extremely low hop bitterness.

A pretty mediocre Red Ale, I'd pass if offered again.

this and the honey were the only bottles from Gahan that I saw out East, didn't bother bringing any home for the boys to try but I think they will forgive me

Thanks to my father for bringing this beer back from a recent trip to Charlottetown. My first beer from Prince Edward Island.

The beer pours an amber color with a white head. The aroma is a mix of toffee, caramel and surprisingly, some coffee notes. The flavor is more of the same. I get a lot of caramel malt, but also some coffee and cream. Medium mouthfeel and medium carbonation. This beer surpassed my expectations and I enjoyed it quite a bit.

A: Pours translucent red amber, as the name would suggest. The head is light tan, and enough retains to leave some lacing.

D: Not a bad choice for having a few.

A friend of mine was recently in PEI and brought me back a growler. She said they had just finished changing the tap, so that this was the fresh of the fresh.

Fresh sweet malt scent. Somewhat creamy. Also something I can't quite put my finger on, but recall from another local brewer's products.

Nice smooth creamy flavor, with a backing of malt sweetness. A nice bitter finish on the end. Little to no carbonation, which lends a flat characteristic to the beverage.

Overall it is pretty decent, but not really special. Good for a few drinks.

A: 500 mL bottle poured with an average-sized, off-white head that quickly diminished to a thin film. Body is completely clear and a dark amber color.

S: Interesting aroma of malt sweetness and fruitiness... there's a hint of smokiness in there as well. A lot of nesses, anyway.

T: The taste is as interesting as the smell. Starts off with the malt sweetness, and blends into a smoky flavor that is a bit of a shock. Finishes slightly bitter.

M: Medium-bodied with a thin/oily texture, and soft carbonation.

D: This is a weird beer... not a bad beer, but definitely different. I can see that it wouldn't be for everybody, and I don't think I could drink more than one or two, but worth a try for sure.

Part 1 of 2 of the Gahan Experience. Thanks to terryeckmeier for giving me this.

Appearance: Not what i was expecting. Dense dark brown body that looks like apple cider with barely a thin ring of foam that slowly dissipates to nothing. Yeah, a minute in and i'm looking at no foam and no lacing. Looks flat to be honest.

Smell: Mild hops with some sweetness but not much else. Slightly better but alas it was not meant too be because the...

Taste: is awful. Sour permeates the mouth then slowly fades probably because i'm getting used to it. It tastes like it's gone bad but it's only about 2 months old. Not good at all.

Mouthfeel: Not much better. Tastes almost flat with little to no carbonation.

Overall: Not sure what happened here but it seems that at least one other review mentions this sourness and general awful appearance. It seems like they can't get a handle on the bottling. Maybe they should get it right before selling it. Officially my lowest review and first drainpour in a review.

(From a limited, dated journal): Deep reddish-brown color. Nice, thick head with a mix of small and larger bubbles. Fruity, almost plum-like aroma with a fair hop presence. Well-balanced, nutty and malty taste, quite smooth, with hints of coffee. Gahan brews all were distinctly of the same family, but the red was particularly solid and worth another pint.

Bottle: Poured a medium amber color ale with an average size head with medium retention and no lacing. Aroma is a mix between some sour notes with a bunch of overcooked vegetables on top of it. Taste is a mix between some overcooked vegetables and some sour strain. I usually don't rate infected bottle and try instead to acquire a more recent offering but in this case the bottle is less then three months old so you would expect that it would at least be drinkable.

Pours a clear orange/brown, small head, no lace. Smell is rich and malty, sweet, some floral hops and chocolate. Taste is chocolate, grassy hops, rich malt, some floralness at the end. Mouthfeel is smooth, medium carbonation and medium body, actually quite tasty.

64 ounce growler brought back from a co-worker's trip to PEI - stayed sealed tight after travelling across the country. The color was a clear, deep reddish brown. Off white foam left a thin head cap, well carbonated. Aroma has a full smell of caramel and molasses, and just a touch of bitter hops. Flavour has more of the carmel and molasses/brown sugar and finished off with more bitterness. Medium mouthfeel is a bit creamy and leaves a nice aftertaste.
Thanks to Carson for bringing this back and sharing.