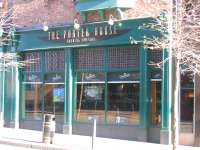 Notes: The Porterhouse brewery is located in an Industrial Estate in North County Dublin, and supplies their outlets in Parliament Street, Nassau Street, and Glasnevin, Dublin, their outlet in Bray, Co. Wicklow and the Porterhouse, Covent Garden, London, UK.
BEER STATS

Large menu, with some decent offerings including some american craft (Founders, Brooklyn, Lagunitas). Good food and a good number of beer on taps. Offers flights for sampling.

Really cool brewpub in Dublin. Great food with an awesome ambiance. Clearly a hit with locals and tourists alike... the staff was friendly/helpful and the beer was pretty solid. Really liked the Oyster stout and will definitely be back the next time we're in Dublin.

Stopped in to have some mussels and a sampler platter. The mussels were a heaping portion that had a delicious whiskey cream sauce. The sampler platter was a mixture of hot wings, ribs, sausage, some dipping sauces. It had a nice rustic feel, decorated with old beer bottles from all over the world and different time periods. The old advertisements of days past also lined the walls. After eating I made my way to the bar to just drink half pints of their brews. I had the Hop Head, Oyster Stout, a strong ale, and their XXXX Stout. All were of good quality. I did notice they had and the Hop Head on cask and the bartender told me that they will have up to three beers on cask sometimes, but at least always one. I was there on a Wednesday from 2 PM to 6 PM. There was a live two piece band playing at one of the tables inside the bar; which made it enjoyable to listen to. Prices were very reasonable. I would recommend it for anyone that is in Dublin.

My favourite pub in Dublin! They brew their own beers and have a really amazing selection of taps and bottles (over a 1,000)!

The Vibe is great: irish or folk music everyday and night. And it's amazing being surronded by all those beer bottles!
Quality : only good beers that's for sure!
The service is not that bad!
The selection is amazing, beers from all around the world
The bar food is not amazing but you're in Ireland damn it!

My friends and I stumbled upon this place while visiting Dublin, and it was quite a treat. We were able to try all their beers, and they were all incredible. The atmosphere was really cool too. Multi-level, multi-bar restaurant with seating all over. The food was basic pub fare done extremely well. Highly recommend to anyone in Dublin!

Four stories of seating, live music, impressive collection of bottles on show all over the place. Nice place to go out. I went with a large group and our orders were all correct and quickly filled. I ordered wings to share with a buddy and they were great quality. On to the more important stuff; the beer high quality and abundant. Their Oyster stout is fantastic and a prime representation of the Irish Dry Stout. If you aren't in the mood to try something new, they've got a bottle list longer than any I've seen in Ireland with stuff from the States and all over Europe. Not bad pricing either. I would highly recommend stopping in here to anyone in Dublin.

We visited here in April 2012 while on a tour of UKoGBaNI and Ireland. After a long ferry ride we dragged the kids to Porterhouse to have a few beers. It was kid-friendlier than most places we visited, and had no problem accommodating the wee ones.

Good beer. I had a sampler and tried most everything. We had standard pub food, which was standard. If you're a tourist visiting the area with family, I'd recommend this. If you're looking for a local experience, look elsewhere.

A great craft beer local in Dublin, and one of the best. A great range of brews from unique IPAs to stouts!
A-Great Irish theme, excellent Irish enviroment, and craft bar essence in the tourist district of Temple Bar. I went during the Olympics and Irish
Q-BEST BEERS IN IRELAND! Freak'n excellent!
S-Top notch! Very knowledgeable, provide great insight and recommendations into brews.
S-Numerous ales, lagers, & stouts on tap. Ask for a bottle of their barrel-aged imperial stout - best thing an Irish brewer has ever done; they do not advertise!
F-Food is excellent! Try the Irish cuisine!
V-Prices on the Slightly on the high side due to location in the tourist district!
Better than the overrated Temple Bar and a Guiness!

This is a really cool place right outside all of the shopping and temple bar area. it is 3 or 4 stories high. staircases twist and turn and seating areas appear out of nowhere sometimes.

it is a good place to go to get something different as far as beer is concerned than most of the places in town.

i would definitely go back here next time we go to dublin.

With 4 levels, a very popular place, gets quite crowded early. Visited on 2 separate occasions & both times it was very crowded. Bottles from everywhere decorate the walls. Only beer on tap is what they brew, about 8 or 9 of their own, including 3 or 4 different stouts. So don't expect to get a pint of the one from St James Gate here. Probably the only place in all of Ireland that doesn't have Guinness on tap. A great bottle selection from around the world as well. They also have a cask selection, which I was told is the only place in Ireland that has cask. Must have something to do with not adapting those English traditions. Had two of their stouts, Oyster (which they add shucked oysters to at the
fermentation stage) and 4X stout. Oyster was like your traditional Irish stout but a little more flavorful, due to the oysters. The 4X was more like an American stout, more complex and flavorful. Also sampled the Porterhouse Red, which was much like a typical Irish red.

Food was decent, lots of typical Irish dishes. Sampled the Bacon, Cabbage & potato, which was very good. Irish bacon
is salty ham, a nice ham steak in this case. The cabbage had an onion sauce on it which was good.

Waitress knew next to nothing about the beers.
When I asked what they had on cask, she had no idea what I was talking about. She did go back and ask the bartender, who set her straight.

A great place to go and have a couple Irish craft beers, one of the best in Dublin. Get there early as it gets very crowded making it hard to find a place to sit.


The Porterhouse Brewing Company in Dublin, Ireland
Brewery rating: 3.74 out of 5 with 1601 ratings