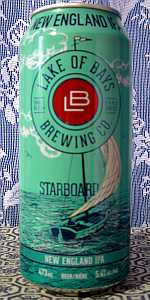 Pours hazy golden-orange; its complexion is pocked by a ridiculous quantity of floaties, and its thin, frothy white head fizzles into oblivion within 90 seconds. Minimal lace, with only a thin collar lasting on - it's visually unremarkable, but that's hardly a major issue. Very mild hints of pineapple juice, mango and papaya come through on the nose, along with some citrusy orange/grapefruit character; fainter still are the suggestions of floral hops, lychee and ripe nectarine. I don't dislike the aroma, but I do expect something a bit more juicy & assertive from this style.

Taste's fine, though I'm having the same problem here that I was with the aroma - give me more juice, dammit! There's some gritty grains and wheat husk underneath a relatively calm sea of hops - subdued flavours of tangerine, lychee, stone fruit and white grape flit across the taste buds, eventually losing ground to the floral, grassy, somewhat pithy bitterness that is featured towards the tail end of the sip. Its aftertaste is only mildly bitter, with hints of stone fruit and lychee lingering briefly before fading beneath a low-key earthiness. Medium in body, with low-ish carbonation levels that gently agitate the palate, adding a weak bite to what is otherwise a mostly soft, smooth mouthfeel. Very easy to drink - and I'd have gulped it all to the way to the bottom, if it weren't for that sediment cake.

Final Grade: 3.82, a B+. Despite being one of Lake of Bays' better overall pale ales to date, Starboard fails to nail that juicy hop bomb profile that I've come to expect from New England-style IPAs. On the plus side, its texture is considerably closer to the mark, as is the lack of (serious) hop bitterness. Competently brewed, but mostly underwhelming - and that's precisely what I've come to expect from these guys now that I've reviewed thirty of their beers. Honestly, I think I'd prefer their Oxtongue over this one.

Appearance - dry hazy golden color with orange hues. A small half finger of white head that fizzles off into a small film rather quickly. An extraordinary amount of sediment is floating in the glass which isn't the best look.

Smell - fairly tropical with orange and pineapple most prominent, juicy citrus is prevalent. Average for the style but nice overall.

Taste - quite grainy initially, followed by some juicy citrus with pineapple and orange leading the way with possibly some cantaloupe. Not as juicy as most in the style. Taste isn't bad, but underwhelming.

Overall - passable but one of the weaker representations of this style even in the local market. Unlikely to repeat this when life in the clouds and wicked awesome IPA are the same price and more delicious and intense.

I got a can of this beer at a beer store in Sault Ste Marie whilst there for my son's hockey tournament. It poured a hazy orangish with thin white head that is leaving a spotty lace. The scent had faint dank citrus notes. The taste was nicely balanced and easy to drink with subtle bitter citrus through the drink. The mouthfeel was lighter in body with good carbonation. Overall its a good beer.

The beer presents with a very citrousy smell. It pours somewhat hazy, with a low white foam that disperses to a thin layer on top of the beer. The beer has a strong citrous taste, which I liked, but a bit of a bitter aftertaste.

My biggest issue with this can was that it was not date stamped. NEIPAs lose their best hop flavours & aroma rather quickly; the malt begins to dominate after just a couple of months and I perhaps shouldn't even have bought a can at the LCBO which was not date stamped. I bought only one of these while buying a bunch of other brands which were date stamped. Message sent.
Ok, pours a clear amber ... wait ... swirl the can a bit to mix up whats in there; should have done this pre-pour - oops! Ok, here comes the cloudiness & at the end some chunks of hop resin. Yes, this one's a bit aged. Once poured it settles into a thoroughly hazy straw/amber colour with a fluffy white head. Minor dryish looking lacing during drinking. Aroma just faintly tropical citrus with some bready malts coming through as well. This might have been a better beer when fresh. Taste follows the nose; some dampened sweet citrus hops but more malt than anything and sadly some metallic lageresque flavours are thrown in as well. Mouthfeel has a decent smoothness to it.
Well, that was a long review for a mediocre NEIPA. I may try this one again if I can find it stamped & fresh. For now I'm going to switch to a CA IPA#11 with a date stamp of a couple of weeks ago to enjoy some nice fresh hop flavour.

Starboard from Lake of Bays Brewing Company
Beer rating: 87 out of 100 with 14 ratings