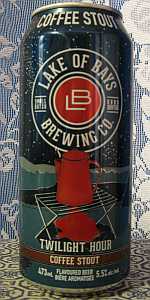 Review from notes. Thanks to Adam for this Twilight Hour.

Appearance - Dark hazelnut colored beer, appears near black in the glass. A finger and a half of light tan head and pretty good staying power.

Smell - Coffee, fresh coffee not quite cold brew levels of intensity but it's very prominent. Not much else.

Taste - More coffee again, although the taste isn't nearly as good as cold brew, a touch stale. Not a whole lot else, so it's one dimensional, but the one dimensions reasonably good.

Overall - If you don't like coffee, you won;'t like this. Fairly intense coffee flavors, although it lacks the luxury of some of the finer coffee stouts out there. Still maybe worth a shot.

Pours dark brown and coffee dominates the smell. Thin-bodied for the ABV, being initially mellow and creamy with a bitter, dry aftertaste. The coffee just doesn't taste good in this one, it's as if they put day-old coffee grounds in a very unremarkable stout.

Pours a dark chestnut brown colour with ruby red highlights around the fringes; it's crowned with roughly one inch of foamy, light beige-coloured head that recedes unevenly over the next five minutes or so, leaving behind a lumpy quarter-inch cap and generous collar. Gobs of lovely lace are also left in its wake - it's a fine-looking stout, of that there's no doubt, but looks can be deceiving. Definitely getting lots of coffee grounds and roasted coffee beans on the nose, as well as a touch of ashiness; beyond that there's only hints of cocoa and just a touch of toffee sweetness. Don't get me wrong, I love the smell of coffee beans as much as anyone, but at the end of the day there's not much substance beyond that.

The flavour is slightly more even-handed - the coffee still dominates, but the beer's profile is helped along by notes of caramelized sugars, cocoa powder and even a touch of dark fruit... date, perhaps? An ashy bitterness akin to coffee grounds crops up towards the finish, persisting into the aftertaste; I actually kind of like this flavour, but I'm a coffee addict so your mileage may vary. Light in body, bordering on thin IMO, with the low carbonation levels not helping in this regard; feels watery to me. I knocked it back easily enough, but if you're not a java fiend I wouldn't recommend this beer.

Final Grade: 3,62, a B. I finished my can of Lake of Bays' Twilight Hour easily enough, but I'd be lying if I said I planned to rush out and find more. As far as domestic coffee stouts go, this one is somewhere in the middle of the pack - it's serviceable as is, but there's plenty of room for improvement. I plan to try this against Muskoka's Shinnicked (another Ontario coffee stout, brewed just up the road from this one) to determine which I'd prefer, but my gut instinct is that they're in the same ballpark.


Twilight Hour from Lake of Bays Brewing Company
Beer rating: 3.25 out of 5 with 8 ratings