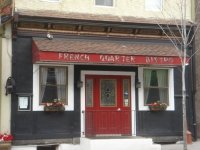 The place is two sections - a small dinning room, and a bar section that also has some tables. The beer selection was a dozen taps of craft beer with a lone Miller Lite in there too. good mix of beer styles, local and national breweries.

service was good, and the food was tasty - it's a cajun menu.

So it’s in and it’s dining, and I’m like “hmmm”. I was kind of expecting a bar. Did I say that out loud? Apparently so. Oh, I see now, yes, there is a bar, there, around the bend and into the next room; a wide open space with a split two-sided gray laminate top and a wood trim bar. A long straight stretch on one side and a smaller “L” shaped backside to the wall. Seating for 20 or so on mix & match chairs, backed and not. We have decided that the bar must not have always been like this. It is a weird set up. No barback to speak of, but down on the end, there’s a triplewide glass front cooler holding bottles; macros & micros sharing space. Glassware on a shelving piece above corner counterings, and awards for something someone apparently did once there, too.

Deep red walls over black plank wood lowers pasted with macro neons & mirrors, brewery tins, placards & posters. Drop ceiling tiles with mounted spots and spinny fans with bell lamps. Strung lighting unlit all around. Slat wood floorings around the bar and the dining side. Large horizontal blackboard on the far wall behind me listing tap selections, new & big bottle specials. And flatscreens on all walls so Heather can love on Obama no matter which way she turns. Corner CD juke and a vintage Phil’s golf game ’05 (ah, yes, 2005, now that was a good year for Phil’s video gaming debauchery).

The dining room proper holds nearly a dozen and a half tables & booths, wall mounted lamps, some framed prints and is just very unbarsidelike overall. They do need some sort of a buffer between the bar and dining sides, me thinks. I mean, it’s most uncharacteristic of a Cajun joint once you venture over to the bar side. Not quite sure what they’re going for there.

12 taps on a bar tower on the front side. 2/3 of them are craft, split between regional us (Troegs Pale Ale, Great Lakes Lake Erie Monster Impy IPA, Climax Hoffman Heffeweizen, Southampton Cuvee de Fleur), and them (Boulder Planet Porter & Cold Hop IPA, Arcadia Jaw-Jacker Pumpkin, Bear Republic Heritage Scotch Ale). The remainder is a mix of a single import (Mikkeller Beer Geek Breakfast), a cider (Original Sin), the localish hero (Yuengling), and bad seed (Miller Lite). I tasted the Arcadia Jaw-Jacker Pumpkin, which was a bit on the sweet side, so I declined and opted for a Mikkeller Beer Geek Breakfast & Troegs Pale Ale, instead. Bottles, too. Port Older Viscocity & Mongo IPA, DogFishHead Theobrama & My Antonia, and a few more 750’s. And I do see (lovely) Orval over there, but otherwise, it’s more meh than not on the bottle front.

Started with a bowl of gumbo on Ed’s recommendation. It was real, real good (like double real). Amazingly flavorful, thick, and spicy, with good heat. Ed had the same, and felt the same. We did dig. Heather started with the wings done mild voodoo. I had one, they were tasty, and I did not cry from hot. I moved onto the blackened tuna (it’s a well established fact that blackening something makes it considerably awesomer, and it did), with excellent spicy green beans, and (overly) cheese mashed (which I left for the most part). Took a baby salad somewhere in there, too. Ed went with the Korean bbq tacos, which much like an eleven year old girl would, he ate only half of. Heather, on the other hand, had the offensive double bbq bacon cheeseburger, with fries, and shocked Ed who wouldn’t stop talking about it, by putting it down (girl’s gotta eat).

I thought the food was damn good. I still do, in fact. Beer was clean & fresh, and the selection was pretty good. Server was attentive and polite, let me taste some things I wish I hadn’t, but I did ask for them after all, so I have no one to blame but Ed. The dining side is a good deal nicer, but the bar side was pleasant enough (at least until that guy showed up looking to set up and start playing music right in front of us at 9). I’d do this again.

Reviewed by warriorsoul from Pennsylvania

4.38/5  rDev +15.3%
vibe: 4 | quality: 4.5 | service: 4.5 | selection: 4 | food: 5
Conveniently located on Main Street in Royersford. Typically a few parking spots open right in front of the restaurant any time of day.
2 separate entrances, one for the pub and the other for the restaurant. Dimly lit in both areas with 15 tables or so on the restaurant side and a bar to seat 12-15 patrons. Plenty of space behind the bar stools, so despite the small space, it does not feel overly cramped. A dozen beers on draft with a nice mix of styles. Most are domestic, but some good ones for sure. Last night they had a Bohemian Pilsner and Strong Ale from Dock Street (they really dedicate a few draft lines to the locals), Founders Double Trouble, Stone Ruination, Sixpoint's Sweet Action, Ballast Point's Wahoo Wheat and of course Yuengling Lager and even Miller Lite for those needing to hydrate.
Very clean lines and all of the beers have been very fresh. Standard pint glasses for anything 7% and under and 12oz. snifters for the stronger stuff. The beer geek in me would prefer they serve their beers less cold, but I find most places around these parts offer them up colder than I prefer.
The food is simply put, incredible. From fried tomatoes, fried pickles, crab cakes as appetizers, to tasty creole dishes such as Etoufe or Jambalaya. In between they have some of the best burgers I have ever tasted. Thursdays they offer 1/2 priced burgers and the deep fried (burger only) option I ordered was perfect. Just slightly pink with not a ton of grease. Light on the cheese and a spicy jalopeno that added just the right touch. Service is always friendly and you can be in and out in an hour or less if you go in knowing what you want to order. The place is not well known just yet, so it is never too loud or a long wait for a table. I am going to enjoy the heck out of this place until others catch on.