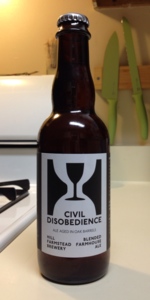 Blended with 2 year old Cantillon lambic. Bottled in July of 2013.

I had this bottle thanks to a great and consistently generous friend of mine.

We poured it out equally into HFS glasses with an air of expectancy. This was supposed to be the crown on the night. It was the one to make sure that the tasting wouldn't end on a sour note, and how could it? This is a beer we've been after since it was CD6.

All poured out, we paused a beat before grabbing our glasses and taking a look. It was a golden color that glowed in the light. It was darker than I imagined for an Art and Cantillon blend, but appearance is shallow metric to judge a beer by.

I took a series of smells over the glass. We expected more of a Cantillon aroma but hoped for something with a strong HFS backbone to it. I could immediately say that the Cantillon didn't over power it. I now wish it did. There was a sharp front of lambic aggressiveness before the smell of butter took over. It didn't start unpleasantly but certainly ended so. I decided to keep it to myself until I made eye contact with the rest of the group. The cat was out the bag.

At this point I give up a quote from the night: "I wanted this to be great at every step, and at every step it fought back against me." If this beer were given to me in the form of popcorn, I would send it back for fear of the health risks that so much butter would surely cause me.

All Art is lost in the front end (the only end that tastes as it should). I taste a soft acidity and tartness infused with a citrusy fruitiness before the butter takes over. At every sip I fought to take back the beer inside, only to lose to the diacetyl.

This right here is a metaphor. This is Thomas Keller battling against Paula Deen. The only winner here was the drain.

And that there is your pretentious review for a pretentiously praised beer. Anyone who lauds this beer was looking to like it more than they were looking to taste it. I don't intend to denigrate this brewery, but this is a beer that someone should be ashamed to give out, let alone sell. CD7 is worse than the sum of its parts.

Bottle from the final round of Collected Works.

A: Poured lightly golden with yellow undertones, and two fingers of white head.

S: the aroma is dominated by diacytel and faint notes of Belgian lambic character. Immensely disappointing.

T: Hints of lambic (similar to the flavor profile of cantillon classic geuze) that are overtaken by diacetyl. Zero trace of Art. The taste is rather awful.

O: Previous reviews hint of diacetyl, but do not forwardly proclaim that the beer is off. Such reviews are misleading. The aroma and taste are dominated by an off flavor, which is undeniably diacetyl. This beer is off. Without a doubt, this is the first bad beer I've had from Shaun.

Pour: Pours a lightly hazy, bright straw yellow with a finger and a half white, fluffy head. Some nice lacing, and the head sticks around for a little while. Wonderful looking saison.

Overall: One of the best Hill Farmstead beers yet, and time is only going to help this beer progress.

A~ glowing tangy orange with a gushing head and slight lacing.

T~ a lot like Art with a thicker cherryish lambic undertone. Other than that it pretty much follows the nose. spicy pepper saison yeast up front, citrus rushes the palette with darker tart fruits, all followed by amazing funk. As it warms up a lot of oak starts to come out.

M~ very well carbonated, just where I like a saison. Smooth and extremely refreshing.

O~ I think this will be really amazing with some age. The CD series seems to get better with 6 months to a year of age but no more than that! Overall a very amazing blend as always, here's to more Civil Disobedience!

Appearance: pours a pale yellow to dull orange. Small white head that leaves a slight lacing along the side of the beer. slightly cloudy and almost opaque

Taste: opens with lemon and strong vinegar. White wine comes in of the back of the sourness. the end is comprised of an earthy farmhouse yeast

Mouthfeel: the sourness on this one is fairly strong, along with an acidic dryness. leaves a barnyard coating.

Overall: not overly impressed with this one. very vinegary and vinous. I wish I could have picked up on some oaky flavors or something to increase the complexity a bit


Part of me feels like this beer is so far beyond my comprehension that I don't even know what to enjoy. It's a tad sour for me. Which is personal preference. Tartness is very pronounced. It's a blend of farmhouse ales aged in assortment barrels. Almost as if Shaun Hill may have over killed here. One sip seems complex. The next seems muddled. Taste like lambic and white wine. I can not seem to pull much oak out of it. Acidic Lemon, Citrus and Grass are the lead notes. Too much acid, sour and tartness for me to rate this amongst the other Hill Farmstead brews I had. Seems to be a miss by their standards. Again, I'm not being sarcastic when I say, this beer might literally be beyond my comprehension of complexity~

I can't believe this has been sitting quietly in my basement for 22 months.
Poured from the 375 ml bottle into a snifter glass.
Pours a slightly hazy dark to mellow golden hue with half a finger of head that recedes.
Aromas are incredible. Full lambic presence, notes of sugary sweetness, notes of light spring flowers in the nose.
Taste is full of lambic tartness with hints of honey, just a hint of sugary candy.
Mouthfeel is fantastic, with perfect carbonation.
This beer is insanely well crafted. It's not a sour bomb. It has full lambic tartness. But the flavor is round, and complex. This beer is world class.

Thanks to Aaron for opening up this beer!

Appearance: Glowing pale straw yellow bodied beer with slight haze and thick cap of white head. Head drops down to thick ring around the glass. A gentle swirl immediately brings back the full cap if not even more head atop the beer.

Taste: the flavor of this beer is all about the lambic and a little bit about the wine barrel. Slight brine note with acetic sourness like an unblended lambic would taste like. Red wine barrel in middle of the beer. Minimal funk. Slightly earthy. Finishes with more acetic sourness that is moderate in intensity, oak, and a light brine note. Not as balanced as most barrel aged HF beers that I have drank, but I like the overall effect that the flavor profile delivers.

Mouthfeel: light bodied almost medium boided beer with low carbonation. The intensity of the lambic flavors tends to decrease drinkability, but I really enjoy how this beer lingers on your palate for atleast 5 minutes after each sip.

Overall: This is my first beer from the Civil Disobedience series by Hill Farmstead. CD7 wasnt really what I thought it was going to be. This beer has a stronger lambic influence and is less identifiable as a saison. With all that said... I really did enjoy it because I like lambics and saisons, so it was a win win situation. Looking forward to trying more beers from this series because it is truely a unique beer.

Appearance. Pours a rich gold with a touch of orange, a ton of bubbles rising from the depths in streams, and a finger of frothy, almost creamy white head with great retention that pretty much paints the sides of the glass. Great stuff so far.

Overall. Fantastic stuff. While not exactly an authentic tasting classic lambic ...or gueuze since it's blended ...but both 2 years old!?! Hurts my brain more than it should. Anyways, it does hit many of the right lambic-gueuze notes with another layer of fruits and dry funk.

jacewg from District of Columbia