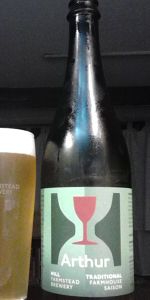 Notes: Crafted from American malted barley, European and American hops, our distinctive farmhouse yeast, and water from our well. Unfiltered and naturally carbonated, this edition was conditioned in a stainless tank for 3 months and dry-hopped with the Cascade.

Reviewed by ScaryEd from New Hampshire

The aroma is still nicely tart, with the same pear and and lemon notes you'd expect. Very herbal and grassy. The Cascade adds a nice grapefruit and spicy hop character.

The flavor is very citrusy, with notes of lemon zest, lime and orange with a significant amount of grapefruit from the Cascade hops. There's plenty of pear with some grassiness and a touch of funk. Very grainy. Tastes like Arthur, but slightly less tart and with more yeast and citrusy hops (obviously).

Overall, this is a fantastic dry-hopped saison. It doesn't deviate too far from regular Arthur, but the Cascade hops add a nice, earthy undertone with a fair amount of citrus, making this more than just a "tweaked" version of one of their best beers.

This one pours a slightly hazy straw yellow, with a 1.5 inch head, and lots of lacing.

It smells pretty similar to Arthur, unsurprisingly, but smells a little bit less tart on the nose, with some dry chalkiness, grapefruit, lots of grassiness, mineral water, and lots of citrus.

Arthur is one of my absolute favorite beers, traditionally. The dry hopping adds a few subtle changes. The beer obviously tastes a bit hoppier, with grapefruit, and a pronounced grassiness. The beer is less tart than Arthur, but has that same stone fruit and chalky candied funk that I love in Arthur.

It's super drinkable, with a crisp and clean mouthfeel, with a slight lingering bitterness. It finishes much more dry than the base Arthur.

You had to know that this beer would be a big slam dunk- and it is.