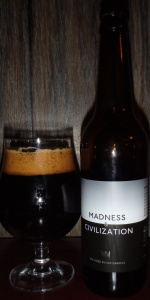 Notes: This batch of Madness & Civilization is composed of Barrel-Aged Everett and Birth of Tragedy, each aged in our favorite bourbon barrels for 2 years, blended with fresh Genealogy, and then conditioned further with coconut and vanilla. After months of bottle conditioning, this beer is now ready for release and enjoyment.

Madness & Civilization is a panorama of our barrel aging program—oak-aged beers that emerge from their individual silences to find structure and voice as a unified composition. This is the result of an unpredictable state of permanent happenstance—a dialogue with our evolving approach to blending that challenges convention and circumstance.

Got this one from rutger a couple summers back

APPEARANCE: Pours our clear dark brown, almost black, yielding only a thin half wisp that vanishes right away. Black body with no carbonation evident. Only a faint ring is there for a while but ends up looking flat by the end.

PALATE: Medium – fuller body with medium levels of carbonation. Enough weight, creamy as well, goes down fine with a bit of a bite and finishes mouth-coating. Decent heat lingers.

OVERALL: Really good. Head isn’t great but the rest is excellent. Decadent aroma and flavor with a good feel to support the show. HF always does great with its barrel aged big boys and this is no exception. Thanks again, rutger!

Used motor oil black, pouring slappy and splashy out of this totally obnoxious bottle--I've never liked the bottles that HF uses for their dark beers. M&C 9 has a surprisingly large mocha head that slowly settles to a thin blanket and creamy ring, leaving short sheets of lace. OMG, what's this?! There are some dabs of coconut lipids that emerge, floating on the surface. I never thought I'd see an imperfect looking HF beer (and I don't usually ding them for their hazy beers because they make them gorgeous!).

Taste is much sweeter than the aroma indicates, but still in the same vein, bringing vanilla-sweetened coconut in first, which quickly fades to make room for cocoa, nutty smoky roast and bourbon with a touch of mapley-molasses and raisin on the swallow. Nutty oak and a peppery, splintery woodiness emerge as it warms, and even still, more creamy coconut develops on the end to finish with a damn near German chocolate cake decadence, for just a split second.

Body is thin and fluid with a crisp, thin carbonation but dry finish.

The beer pours a jet black color, thick and inky, viscous in texture that is extremely opaque with a taut caramel head that has moderate retention and yields spots of lace. The aroma is pleasant, lots of chocolate, strong roast, a bit of coconut oil, light oak, a hint of bourbon, very grainy with only a touch of sugary sweetness that you'd expect from vanilla beans. The flavors are good, super smooth, loads of bakers chocolate, brown sugar, caramel, strong roast builds as it warms, light coffee, charred wood, a hint of bourbon, coconut oil and some lingering marshmallow sweetness. The mouthfeel is nice, heavy body, slick texture from the coconut, coats moderately well with a creamy finish.

Verdict: A good beer from Hill Farmstead. This blend is a little less nuanced and the adjuncts make the individual components a bit harder to distinguish but it's still an enjoyable beer.

Pours pitch black with a 2-finger light-mocha head that is thick and creamy, and retains indefinitely. The head leaves plenty of lacing on the glass.

Aroma is super roasty and chocolaty. There's char, oaky tannins, hints of vanilla, and just a touch of cinnamon and coconut in the end. As it warms bitter baker's chocolate and dark roast coffee become more prevalent. I also get sweet, smooth bourbon the more it warms. Really a treat to smell!

The flavor is much of the same. Very smooth, velvety chocolate balanced by roasted malts, roasty coffee, and charred oak. The slightest hint of cinnamon and vanilla can be detected in the middle of the palate, but the coconut doesn't really make itself known. Sweet bourbon is noticeable throughout, and there is a slight booziness that it contributes, but it's not overpowering. The more I drink of it the more I notice a nice honey note throughout. Incredibly tasty, and my only deduction is due to the lack of coconut and, for the most part, vanilla that it was aged on.

The mouth feel is super velvety, with only hints of sharp alcohol around the edges of the tongue. Fairly thick considering the abvs of the the beers blended in this. There's nice light carbonation that keeps the beer alive on your tongue, but it doesn't stop it from being viscous and sticky, leaving the flavor in your mouth for quite some time after you swallow.

This is another great addition to the M&C series! They played it safe with the amount of vanilla and coconut uses, which is understandable as HF is known for it's restraint and subtlety, not it's heavy-handedness. However I would have preferred just a bit more coconut at least. Nevertheless a great beer!

A~ black as night with a tiny tan head and no lacing.

S~ burnt caramel, coffee, vanilla, dark chocolate and a lot of coconut. whoa! little bourbon/booze on the end too.

T~ follows the nose some how more coconut here! its like a fresh coconut/vanilla stout at first followed by nice smooth older bourbon pulling it all together!

M~ silky smooth! and nice carb for the style.

O~ i didn't really know what to think of this one since i haven't been thrilled with HF adjuncts but this was spot on and very well balanced! once that booze dies down a little more this is gonna be out of this world as long as the coconut and vanilla stick around!

This one pours a fairly dark black, with a small head and not much lacing.

The coconut is pretty subtle here- which is not surprising. I wouldn't think Mr. Hill would want to make a coconut bomb- it's not his style. There's some chocolate syrup, roast, dark fruit, coffee, and oak.

There's a lot of little subtle complexities that make this a very fun beer. You get a little bit of coffee from Genealogy, that great dark fruit character I get in a lot of HF stouts, slight roast, vanilla cream, and oak. There's not a ton of bourbon. It tastes super silky, and it's incredibly well blended.

This is medium bodied, not very thick, but very silky smooth. It's got a lower level of carbonation.

This is really quite good. There's not much that could ever convince me that Hill Farmstead isn't the best brewery in the world.

500ml bottle. Served in a Hill Farmstead stemmed glass. Pours a dark cola brown body, nearly black, one finger offwhite head, good retention, spots of lacing here and there. Smell is rich chocolate brownies, cocoa, roast, milk chocolate, smoky bourbon. The vanilla isn't there on the nose, but there is a bit of toasted coconut. I'll take it. Flavour is brownies, bourbon, touch of smoke, light oak, milk chocolate and bitter cocoa. Light coconut flavour and a touch of marshmallow shows up on the backend and it's liquid mounds for a brief moment. Mouthfeel is medium bodied, smooth and rich, good carbonation, bourbon on the finish. Just the right amount of bourbon to go with the base beers; the coconut and vanilla really don't show up until towards the end of the palate, but leave a nice finish; the adjuncts are definitely complementary here and if you're looking for a combination of Prop 13+VR pastry stout, this isn't it. If you want a really nice dessert beer, this is a nice one to pick up.

This is another solid offering from Hill Farmstead, though I feel the description of the beer is misleading. The vanilla is barely noticeable and there is no discernible coconut on the palate. It was a clever marketing tactic to boost sales and elevate trade value. Overall, I thought that both BA Everett and BoT were better beers on their own.