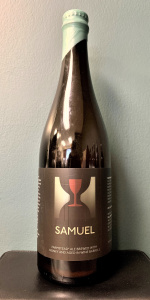 Notes: Samuel Hill (1820-1899) was my great-great-uncle, brother of Ephraim, and a widely accomplished individual. He served in the Union army at the Battle of Gettysburg. An early agricultural innovator, he held several patents for milk cooling and cream separation; if you've visited our taproom, you've likely seen a reproduction of that patent on display. He moved a house, midwinter, with horses from North Greensboro to Greensboro Village and also helped build the first road from Greensboro to Greensboro Bend.

I spent more than 6 years contemplating such a beer that might be worthy of Samuel's name. In an attempt to honor this intrepid relative, I realized that his namesake beer must be comprised of the same nuances that defined two of my favorite beers: Le Sarrasin and Vera Mae. We set out by crafting a base of buckwheat, spelt, Vermont wildflower honey, and the same hops used in both Vera and Sarrasin. Following shifting seasons of rest in wine barrels and more than a year of bottle conditioning, we are finally able to present a beer that is more than 9 years in the making and worthy of Samuel's name.

This beer is simply amazing. Light straw color, with the perfect amount of carbonation, and a super crisp and clean flavor. This is probably the best beer I have ever had. Need more.

Hill Farmstead is the best in the world. Period. Drinking it aged almost a year and this is without question a “WOW” beer. SO good! Kudos to Hill, offer this more!!!!!

I've had wine barrel vera mae once before and I'd say that's a really good comparison to this beer. Basically a perfect mixed culture barrel aged saison. Lemon and honey shine through in the taste and it finishes super smooth and dry, not acidic at all. Really outstanding.

Four bottles consumed on-site at Hill Farmstead Brewery throughout the course of the same day during the anniversary week, May 22, 2019. Served in a stemmed glass.

I'll note that our servers had variable ways of pouring the beer. Shaun Hill himself refused to pour any sediment, leaving it at the bottom of the bottle. Other staff would pour the sediment into each glass. This review is essentially going to focus on the non-sedimented pour, which is supposedly what Shaun Hill wants us to experience- but I'll put in a few notes about differences. Read on-

Appearance- the difference in pour clarity is astounding. First pour from Shaun is golden yellow body, good clarity, one finger frothy white head, good retention, bit of lacing that sticks around for a good while. Other pours were more cloudy and hazy, having more of a peach coloured body. Pretty astounding, wish I could upload photos for my review to show you guys the difference.

Flavour- Clear pour was an absolute delight- light green apple and moderate acetone, vanillin, moderate acetic acidity, light grainy funk, oak, touch of biscuit, dry white vinous character along with a mild apricot stonefruit tart flavour. Lots of complexity to it, slightly dry and more crisp acetic acidity compared to the sedimentous pour which provided more of a moderate stonefruit flavour to it, a bit more minerality to it. I can see why Shaun prefers this to be poured clear- it has a more discrete presence of flavour to it, a crisper and drier expression of stonefruit and barrel. The sedimentous pour was a bit more muddled, while it bought a bit more stonefruit to the table, it also blurred the remainder of the beer somewhat. That being said, a separate pour of the dregs at the bottom of the bottle did taste pretty amazing.

Mouthfeel- medium bodied, crisp and just a trace bit of acetone dryness on the palate. Good carbonation. It was easy to both sip and aggressively drink down my multiple glasses. This is certainly a beer to take a moment of and consider, but also to enjoy. I figure that's what the brewer's vision for it is.

Overall- A fairly impressive barrel-aged saison which I think is distinguished by its relatively forward barrel character with vanillin and acetone. In my opinion, this compares very closely to Side Project's offering- Tete de Cuvee- which sports a similar oak-forward acetone character to it. I doubt I'll ever be able to do a side-by-side, but in my memory, they are pretty close.

Onsite pour, half of bottle into HF goblet.

Aroma is grassy, citrus zest and oaky eart with a hint of funk.
Flavor has crackers grain, tart, slightly sweet, earthy grass and hay.
Some fruity flavors including light grape and floral berry.
Everything is balanced and clean, dry, nothing over powering.
An excellent and exciting brew.

The beer pours a hazy lemon color, golden hues with a thin white head, hardly any retention with a few spots of lace clinging to the glass. The aroma is excellent, super funky, lots of earthy and grassy qualities, strong buckwheat and pale cereal grains, dead leaves, pine resin, musty oak, light vinous acidity, citrus peel and a bit of vanilla. The flavors are fantastic, super dry and grassy, limestone, citrus peel, cereal grains that are softer and sweeter with some heartier flax and buckwheat grain, musty oak, light char, vanilla and white grain. The mouthfeel is good, lively and crisp, vibrant texture with a medium body that finishes easily with a tart bite.