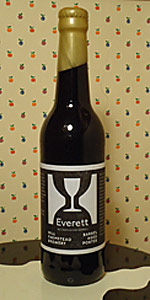 Batch 3: Our Everett porter aged for over 28 months in hand-selected bourbon barrels from some of our favorite distilleries. 500ml.

Bottle from the brewery.
Batch 3.

This actually fizzed up a little in the bottle when I opened it, and the first pour was pretty foamy. Good appearance, much like regular Everett, the darkest brown you can imagine, with two inches of foamy tan head that eventually settled down to a wispy layer. Lots of barrel in the aroma, dark malts, coffee, some dark fruits, anise. In the taste, again, big woody barrel profile, hot bourbon, dark roasty malts, notes of dark fruit and licorice. Medium body verging on medium-full, decent drinkability, but a little too green/messy at this point, and a bit over-carbonated. The booze thinned the body out a bit compared to the base beer.

I definitely prefer regular Everett over this, as the regular is pretty much the best porter on the planet. It's not often I feel barrel aging detracts from a beer, but I felt this was the case here. However, this beer is still very young, relatively, and I think it needs to sit at LEAST another 6 months. And that's the next time I'll revisit it. Essentially, it needs to mellow: the bourbon is too hot, the barrel is too strong, and the carb is too high.

Appearance: Pours fudge brown with a nice cap; a decent amount of lacing lingers and the head retains well

Smell: Roasted tones and chocolate, with a smoky/peaty edge

Taste: Chocolate and roasty flavors, up front, with developing smoky/peaty elements; the oak and vanilla develop in the mid-palate but the finish is rather harsh

Overall: Normally, I like what Bourbon barrels bring to a beer but in this case I think I prefer the base beer

Everett is so good on its own, so to my taste aging took away from the hops, masked it in bourbon... would take a fresh Everett growler any day over this although I was very glad to have tried. Wouldn't hesitate to drink again, but I prefer the fresh base beer.

Rather disappointing. I consider Everett to be about the best American porter our there. The BA version doesn't come close to the same level. I found it a bit sharp and woody, and noticeable thinner mouthfeel than the base beer.

From a bottle into a HFB glass to ring in the New Year. Pours a deep, rich black/brown with a thick tan head. Aroma is wonderful mix of the base Everett porter and the barrel character--smoke, chocolate, coffee, malt. Taste is fantastic. Simply put, one of the best beers I've ever had. Rich, complex with everything you'd expect from a top beer made better in a bourbon barrel. Easy to drink, and too soon finished.