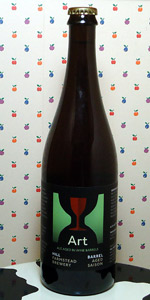 Notes: Art is the wine barrel fermented and aged version of Arthur (1922-2005), our grandfather's youngest brother as well as the name of our rustic farmstead ale. In honor of Arthur, we mindfully blend his namesake beer from French oak wine barrels that have been aged and conditioned for between 1 and 3 years. This is the standard that reflects, redefines and guides the progressive vision for Hill Farmstead.
View: Beers | Place Reviews
Reviews: 93 | Ratings: 509 | Log in to view all ratings and sort

Outstanding beer. Had onsite in Jan 2018. It was incredibly smooth almost like a Chardonnay vs. a beer with that oaky flavor. Beautiful color and overall experience having the beer.

The beer pours a bright golden color, hazy and cloudy with a finger of white, soapy head that has good retention and yields plenty of lacing. The aroma is excellent, great funk, nice and bright, soft oak, light vinous acidity, floral with a touch of sweet pale dough and some berry fruit. The flavors are excellent, beautifully balanced and layered, lovely funk, softly tart citrus, berry fruit, bright white wine grape, lightly acidic with an incredible floral bouquet, soft chewy oak plays with the pale doughy malt, a touch of spice and soft pitted stone fruits. The mouthfeel is excellent, coating and creamy, medium body that is so gentle and soft with the easiest of finishes that is lightly tart.

2014 bottle poured into a stemmed tulip at the brewery. Pours a clear gold color with substantial head that dissipates quick. Aroma is lemongrass, subtle vinegar, hay and funk. Taste is all that and then some...very balanced. Some lemon acidity and funk is prominent. Very nice! Feel is what I’d expect for this style of beer. Overall, this is a magnificent and elegant brew. So deliciously tart and also balanced.

This one pours a mostly clear light yellow, with a small head and lots of lacing.

This is honestly exceptional. It's so dry and remarkably complex, with lots of little complexities. There's lime and stone fruit, smarties, white wine, spicy oak, vanilla, and grassy funk/hops.

This is creamy and tart and tangy, with a high level of drinkability.

This is nearly as perfect as it gets for the style.

Art b5 served from 375ml at the brewery.

Dregs separated by server. Pours a clear, straw body with a one finger white head. That sticks around for the duration of the drink. Spotty lacing.

Art lived up to the hype for me. This is so complex yet very balanced and delicate. More champagne-like than flora.

How does a Farmhouse Ale get any better than this. Beautiful brilliant golden color with a foamy fluffy sticky head that lasts and sticks to the glass with a dense honeycomb lacing. The wine and oak tones are well balanced with the base ale. Wonderful nose, smooth mouth feel, must try!

750ml bottle, batch 4. Served in a snifter glass. Pours a clear golden-yellow body, slight straw hue, one finger thick white head, good retention, not much lacing. Smell is brilliant funk, white vinous character, mild-moderate vinegar acidity, light oak, minerals, a bit of underripe peach. Wonderful stuff, so complex. Flavour is similar; there is more of a moderate acidic presence behind the oak and white vinous character. Light cereal grain, mineral and cobweb funk. This is one of the best saisons as far as the flavour goes; the complexity is fantastic. Mouthfeel is medium bodied, tart and a little dry, and the glass seems to empty itself a bit too quickly, strangely enough. Vinous and light vinegar acidity finishes things off. Overall, fantastic beer that is up there amongst the best of the style.

Beautiful, almost opaque straw color. Aroma is white wine, oak barrel, warming alcohol, various stone fruit aromas. The taste follows with oaky, dry white wine. Plums and apricots and a slight alcohol warmth. Mouthfeel is perfect for the style, on the thinner side with a good level of carbonation. Overall, another great beer from HF. Expertly blended and look forward to saving my other bottle for a while!

Poured from the bottle into stemmed tulip.
Pours a medium to dark straw with perfect clarity and one finger of head the dissipates.
Aromas are wonderful...yeast, white wine, wood, mild funk.
Flavor is perfection. Lovely sourness mixed with wine and wood. Perfectly balanced.
Mouthfeel was excellent as with all Hill Farmstead beers.
This was a near perfect beer. It's incredible.

T: The beer starts off with a pop of stone fruit sugar sweetness, followed by waves of wine barrel character and a touch of heat from the alcohol. As it warms, lemony tart citrus notes emerge and the wine flavor shines through, enveloping the base beer.

F: Incredibly soft and delicate mouthfeel. Everything about this beer is clean and balanced. The carbonation is spot on. The finish is dry.

O: Perhaps one of the finest examples of what Hill Farmstead is capable of producing. The finished product is unrivaled by anything I have had in craft beer.

Awesome beer. Wine barrel present, expands on what I love about Arthur. Soft, citrus presence. Makes me want more and more of this. Would bang again!

Batch 4 (thanks Mike!) served in a HF tulip. Pours a burnished orange hue with a frothy, off-white head that dissipates into a bubbly band around the edges. Nose expresses vinous notes, a hint of vanilla and a trace of apple cider vinegar. Taste consistent with nose; however, the flavor profile comes off a bit watered down. There's also the addition of lemon peel. Mouthfeel is light in body with a soft carbonation and a mild acidity. Overall, quite tasty but not sure it lives up to the hype.

Bottle. Poured a hazy yellow color. Aroma was bright, rustic, funky, and tart with some wet woody/cork. Flavor was still much like regular Arthur but a bit more intensified and with a wine and wood addition. I haven't had Arthur in a while but it stills seems rather closely tied to Art; not an absurd transformation. I love the farmy/rustic quality that Hill Farmstead's farmhouse beers finish with. Really delightful.

Appearance - Pours a pale straw yellow that is slightly opaque, but you can vaguely see through it. It's golden hue resembles more a glass of Chardonnay than beer, but the narrow, dense, snow-white head gives it away. What the head lacks in height it more than makes up for in retention, as it never fully dissipates; even when it finally sinks, it coats nearly the entire surface with a thin film of foam.Bubbles of carbonation lackadaisically rise to the surface every now then, but they are sparse.

Aroma - The aroma is a blend of fresh-cut grass, lemon peel, nectarines, subtle graininess, and finally a burst of white grapes at the end. It is altogether cohesive and summons and subtle tartness that ties everything together. The fruitiness of it makes it infinitely refreshing to smell, and the acidity coupled with the almost tropical-like fruit blend is nearly flawless in execution. The barrel is integrated seamlessly, with waves of oak, vanilla, and finally the wine itself washing over the other notes without overpowering them.

Taste - After my first sip, I was surprised at how acidic Art actually is compared to what I perceived in the aroma; to be fair, in contrast to other beers it isn't overly acidic, but it came across more than I expected. After a few more tries to acclimate, it's easier to swallow. The grape-lemon zest combo is still king and why not, since it is so good? Lemongrass and the grains come next to light the load, before finally the fruits emerge again to carry this to the finish. The tartness kicks the flavors up to a whole new level. The wine is a bit more present here and it contributes a slight booziness that oozes into the other flavors to give them that barrel-kissed feeling. The vanilla falls away here, leaving the oak to drive home the barrel notes.

Mouthfeel - The mouthfeel is probably the only thing I can fault Art on, in my opinion. I was expecting more carbonation based on the style, but it falls pretty low on spectrum, and a bit more would've made this even better. Otherwise, this is very nice. It is light on the palate and is just dry enough to make it super refreshing.

Closing Arguments - As my first foray into Hill Farmstead's barrel-aged program, and really, to the brewery itself (I've never really tried many of their beers even though they are always on my radar ever since I had Ephraim way back in early 2011), I didn't know what to expect with Art. Happily, I can easily proclaim this is near the top, if not the top, of my saison list. It is flawless in almost every way besides the carbonation, and I could drink this endlessly - especially in the summer heat.

M- The mouth feel is incredibly soft, with a medium body and light carbonation. It finishes incredibly dry!

O- This is a beautiful wine barrel aged saison! One of the best I've ever had, and it should be sought out for sure!

A: Gold, white head that sticks around forever. Hazy, great looking beer. S: Funky...so much funk. That Hill yeast smell, some oak and lemon. T: Lemon, funk, oak, hay, basement...all I want in a beer. M: Carb is right where it needs to be. Keeps it soft and finishes dry, making you want more. O: This beer is exactly what I wanted it to be and more. It's oaky, funky and perfect. Way to go Shaun, you never disappoint

Purchased one year ago at the source. Pours a cloudy yellow. Aroma is super funky. Taste largely follows. As it warms it becomes much better. Not sure I get much wine barrel in this.

B3, hoppypocket, can't thank you enough. Tons of barrel on the nose. Tons of wine barrel, good mineral notes, decent sour. Different and not quite what I was expecting (not in a bad way) would drink again ;-)

Perfect slighly hazy golden color. Was extremely active in the bottle before pouring. The smell was pleasantly funky and tart...you can smell it the second it pours. The taste blew me away...zero flaws as far as I'm concerned. Everything good about Arthur with the added complexity and tartness from the wine barrels. Even has a bit of vanilla flavor in the aftertaste which was very nice. Less carbed than I was expecting and that's not a bad thing...almost creamy, which I didn't expect either but I really really enjoy. This may just be the best beer I've ever had. Wish I could drink this every day.

wow--- what a funky nose---apple meets barnyard funkiness... however, the flavor is a little more restrained and not quite up to the nose... a seriously delicious BA saison, but I have to agree with another reviewer, its no le sarrasin!... next up is Ann so ill have to see how it matches up.... life is rough!

Batch 3 at a bottle share. This is a stunner and greatly exceeded my expectations. I actually liked this better than Ann, so I'm a bit surprised by the lower ratings.

L: dark straw
S: tart, Meyer lemon flesh, green melon, green grapes
T: same as nose plus french oak. Tart with a hint of sweetness in the finish.
This is the best beer that I have ever tasted