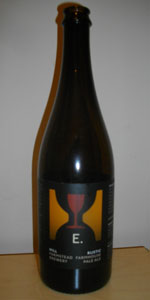 Notes: E is definitely not a Belgian IPA - it's a funky version of Edward (american pale ale) - fermented with brettanomyces, dry hopped with galaxy, and aged on stainless for four months. Basically, we refer to it as a farmhouse pale ale - a cross between a saison and an american pale.

One of the most under rated Hill Farmstead beers I've had. No idea what it was like fresher, but with years of age on it this is a citrusy, juicy, bretty beauty with a nearly perfect creamy farmhouse body. Ample carb but almost meringue like while maintaining some rusticity.

Bottle shared with bstyle, poured into a Hill Farmstead tulip (10/2012)

Pour: Hazy golden orange, with a massive three finger white, soapy head. Head is super thick, and hangs around to a long time. This heavy lacing.

Smell: Starts with an earthy funk, followed by some bready yeast, pepper, and citrus. Some lemon zest and clove in there.

Taste: E. has really started to brett out. Earthy funk right off the bat, followed by some citrus zests. Biscuity sweetness mingles with peppers and spices. Clean and bitter on the finish, with a substantial amount of earthiness.

Mouthfeel: Juicy, yet dry. The funk own the mouthfeel as well. Really quite refreshing, and the best part of this beer.

Bottle poured into a Hill Farmstead stem (4/5/13) - score based on this review!

Pour: Hazy, bright pale orange with a giant three plus finger white, foamy head. This bottle was an excessive gusher right away. Some sticky lacing, and the head hangs around the entire glass.

Smell: Big, bright, tropical brett. Lots of pineapple, mango, grapefruit, and papaya. A touch of earthiness, and a very light funk. Some saison like qualities.

Taste: Really tropical fruits up front, with more pineapple and mango, and some grapefruit. A nice bready sweetness. Not much in the way of funk, but a definite mild earthiness. Finishes juicy with the tropical fruits from the start.

Mouthfeel: Slightly tart, but only just. Really crisp, and despite the excessive gushing, not overly carbonated.

Overall: This beer really evolved in the 6 month span between the times I had it. I definitely enjoyed it with more age.

Cloudy gold pour with a finger of white foam that relaxes to a thick and lasting skim and leaves bubbly lace legs on glass.

Full bodied, yet refreshing, highly viscous, just enough spritzy carb., but with a finish that is this clean and bright the more resiny the better!

Just a delightful beer it is a pleasure well worth the four year wait. Can't imagine it is gonna get better than this so pop em if you got em or talk a friend into it if you don't.

A - Pours slightly hazed golden yellow with a nice one finger tall white head leaving spotty trails of lace down most of the glass.

S - Smells of damp earth, musty funk, spicy belgian yeast, and a nice strong fruit aroma - mainly apples and oranges. The hops are there but the other aromas drown them out a bit.

T - Starts off with the musty funk and wet earth from the aroma combining with the bready yeast and light spice to form the saison base. The fruit and hops come through toward the end of each sip, leaving the palate dried after each sip.

O - I only got a sample of batch one but I thought it was pretty good. Now that I got to try a proper pour I can really really see what this one is all about. The flavors work very well together and make a really awesome beer.