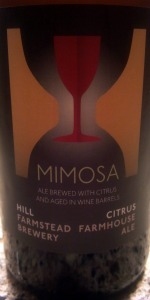 Notes: Mimosa began as an idea: a beer inspired by our obsession with citrus. We built a recipe comprised of our favorite ingredients: Local organic raw wheat, Citra and Galaxy hops, Brettanomyces, and a healthy addition of fresh citrus zest. Mimosa was conditioned for 8 months in wine barrels with our resident microflora. 19º Plato 500 icus.
View: Beers | Place Reviews
Reviews: 52 | Ratings: 200 | Log in to view all ratings and sort
Reviews by Thehuntmaster:

Thanks to JAXSON for this bottle.

Appearance: Mimosa pours a moderately hazy golden yellow, with a gentle pour yielding a massive white head. The head lasts really well for a 10% sour and coats the glass in beautiful patterns of sticky lacing as it slowly recedes.

Smell: Wow, this actually smells like a Mimosa - albeit a slightly funkier version. Orange and dry white wine dominate the initial aroma, but a little warming allows some other notes to become apparent. These include: A distinct bretty character (almost barnyardy), oak, old wood, old dry grass and some sweeter fruits (peach and a hint of granadilla).
There is no trace of the 10% noted in the nose.

Taste: As with the nose, the flavour is dominated by big citrus notes, with white wine, oak and some brett character (almost horsey) also present. As the beer warms a light sweeter fruit character is noted, alongside notes of dry grass, sweat and a hint of hops. Warming also adds some alcohol character that seems to clashes with the brett.
The flavour is lightly tart (I was expecting it to be a lot tarter) and the finish is very dry.

Mouthfeel: Medium bodied, with a high level of soft carbonation. The combination of the mouthfeel and the fresh citrus flavour made this a fantastically refreshing beer for a hot summers day.

Overall: Mimosa is a really tasty wild ale, but is a little one dimensional in the flavour department. I would love to see how this one develops with age, but I can't see it ever being worth the price!

S - great sweet grapes and berries. Not too complex and no wildness to it.

T - great balance between the sour and sweet. Berries and cherries along with some lime and grapefruit. Only slight funk to it which only adds to the flavor and balance. Wow.

O - all around great beer that I will need to get more of.

From notes I finally found. Amazing beer, the depth of the flavor from champagne, tannins, citrus, bubbles to the creativity needed to make this beer just something you can't forget. Loved the funk here somehow balanced with the clean flavor. My first HF beer and mind blowing.

Cracked into a bottle of Mimosa for my 30th birthday with two good friends, sampled as the sun was setting over the lake at my buddy's camp. Not too bad.

This beer is awesome. As with so many of HF's barrel aged saisons, it is a testament to balance and artistry in brewing. I'm an absolute citrus fanatic so this beer is right up my alley from the start....

Appearance: HF saison, golden and glowing. Less head than say an Arthur, fades on the quicker side. Awesome.

Smell: If I could just smell this beer, I'd prefer that over drinking many other beers. Orange, funk, greatness.

Overall: I can't imagine much else better than this. I'll make every attempt to get more and more of this beer. Here's hoping either this beer is brewed again, or some other Imperial saison with citrus addition is crafted by Shaun Hill and the team at HF.

Like others have said, this beer is like a ramped up Juicy. Just perfect, and it's aging VERY well.