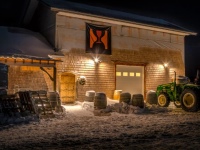 Notes: Hill Farmstead has a small bottle shop that carries offerings from other breweries in addition to bottles and growlers of their own offerings.
BEER STATS

4.31/5  rDev -7.7%
vibe: 5 | quality: 5 | service: 3 | selection: 4.5
Vibe: Going to this brewery, okay even making to this brewery, is an experience. As everyone who has every been will tell you (correctly), to say that this place is in the middle of nowhere is the understatement of the year. The work that you must do to get to it though, is really part of it, and you will appreciate it more when you get there. It sits on a lovely plot of land that one would never expect to be at the end of such a dirt road, with well manicured grass and a picturesque view (that is if you can convince yourself to look away from the brewery back the way you came to see the mountains). As far as the indoor facility itself, it's nice and clean and well put together, but rather minimal, though at this point, given everything else you've seen it hardly matters.

Quality: Some of the best beers around, I'm not going to say the best, I don't know that there is such an obvious thing, but they are phenomenal. If I had to pick one thing about them that is truly distinctive to their beers (They are not the only people on earth making great beer, so the quality of the beer is not the most distinctive thing), it would be the delicate mouthfeel, all of these beers have a great softness/lightness on the palate, even when they are sharp.

Service: My one real gripe with the brewery itself, don't get me wrong, no one was rude, but the way that they run their taproom. For those of you who haven't been, if you are doing a growler fill you take a number and go to the left side of the bar, if you are getting something for on premise, you go to the right side. This system was very frustrating to me as it was not well spelled out anywhere (supposedly it was taped to a column somewhere but I didn't see it). This system (or rather the lack of illustration of this system anywhere caused me to wait in line for a good while until I got to the bar and was told I was in the wrong line. I'm sure on release days and for other such events this makes sense, but on a Wednesday, I just found it irritating and given how far I had come to taste this beer for the first time, it felt for a moment like I had the carrot dangled over my head and then taken away. Also wish they had more outdoor seating.

Selection: Okay, so this one is kind of up to you. Have they made a lot of different beers? Yes. Have they made a lot of different styles? Not really, but enough. Will the draught lineup be diverse? Maybe, I would check before you go. My interest in them stemmed purely from their farmhouse ales, however, when I was there, there was not a single farmhouse ale on draught. Now I knew this beforehand, and unfortunately, it was only happenstance that I could even go anyway, so not their fault really. That being said they keep a good variety of bottles available for onsite consumption, so all was not lost for me and I had an amazing time.

4.41/5  rDev -5.6%
vibe: 4.25 | quality: 4.75 | service: 4 | selection: 4.5
Curated selection of beers including taproom-only and rare bottles. Get a reservation before visiting. Need to wear a mask inside even in summer 2022. Cool farm converted into a brewery. Outside seating is nice for having a few beers. Unique style of beers that exhibit an almost European kind of elegance and restraint. Expensive. More like wine culture than beer. Lots of French Canadians among the patrons. Great place overall.
May 09, 2022
Rated: 4.75 by edthehead from New York

3.98/5  rDev -14.8%
vibe: 4 | quality: 5 | service: 3 | selection: 3.75
Visited during COVID, during which the brewery had some constraints.
Lovely place to sit and enjoy a beer and look over the rolling hills. Inside isn't too large (and there is a single bathroom), but there's a wrap around deck and seating out on the lawn (roped off). Service was ok, and a little haphazard. The beers were pretty expensive, and there happened to be a bunch of cellared/aged beers available on our visit. This might be normal, but I was hoping for a few standards and/or more on draft. Everything we had was at least quite good, and more than half were excellent, so if your main goal is quality beer, you probably will enjoy the time there (getting there might or might no be so fun for you).
Sep 12, 2021

Reviewed by shawver74 from North Carolina

4.5/5  rDev -3.6%
vibe: 4.5 | quality: 4.5 | service: 4 | selection: 5
The Northeast Kingdom is beautiful, especially after a fresh snowfall. The taproom is gorgeous--smart integration of wood with concrete and metal, lots of natural light--and the outdoor space is expansive. The only downside is the size of the taproom and the single bathroom, both issues a clear product of insatiable demand conflicting with a desire to keep things more intimate than commercial. A wonderful place to enjoy world-class beer, just be cautious of when you go and the large crowd you might encounter
Feb 29, 2020
Rated: 4.83 by Handz from Rhode Island

Reviewed by Samdaddy from Massachusetts

Reviewed by DokiDokiLitFam from New Jersey

4.64/5  rDev -0.6%
vibe: 4.5 | quality: 4.5 | service: 5 | selection: 4.5
Nice cozy, folksy atmosphere. Everything made out of a wood decor. The bar, the tables, walls, balcony, all wood panels. Aesthetically pleasing. You walk into the taproom and you get a nice view of the brewing area on the left as soon as you walk in. The staff is informative and accommodating. Extremely nice people. My friends and I ordered a bottle of Anna and the server split it for us into 4 glasses. Paired nicely with the 7 year old Canadian Cheddar they had available as well. Being my first time in Vermont, this was a great introduction.
Nov 09, 2019

5/5  rDev +7.1%
vibe: 5 | quality: 5 | service: 5 | selection: 5
Not much I can say about this place that others haven’t already described. This is the crown jewel of craft beer. The pilgrimage site for where beer became an art form. Definitely off the beaten path way up in the NEK. Nice to see a lot of Québécois cross the border for great beer, in addition to license plates as far as Virginia and even Texas. Such a pleasant experience no matter the weather. Worth the trip.
Nov 03, 2019

Rated by colby600 from Connecticut

4.78/5  rDev +2.4%
vibe: 4.5 | quality: 4.5 | service: 5 | selection: 5
Finally made it to HFB. In the South west corner of the NEK. Beautiful farmland and woods.
The facilities include a large bar/table area... with draw a number system for take home draft beer; 750 ml and 2l growlers available but can also bring your own if meets standards. Adjacent is full modern brewery and retail store/ building for cans, bottles and some limited swag. There is also plenty of parking at facilities and nearby/ just off the road about 100 yards or so.
There is plenty of outdoor space and set up to enjoy your beer outside if desired.
The beer is deservedly famous and amazing... and to have it fresh from the taps or in super fresh cans and bottles is just so worth the trip.
The people were great and super helpful. While this is a tap/tasting room... my Wednesday there seemed mostly about people coming for bottle releases and complementary purchases of cans and growlers. So most people were outside /waiting in line to purchase beer at Retail store. The taproom was fairly quiet as the buyer crowd left.
No food but outside there was a cool word burning brick pizza oven sitting on the bed of a truck...was selling all kinds of ‘Za’s all day.
While the line took 3 hours today... we had a great group; glassed beer ( no solo cups) to drink from the bar while in line as well as nearby .
Agree with earlier review... GPS will get you there, but no cell service once there. Good to have a map with you to guide return if not a local... like me.

Reviewed by egrandfield from Massachusetts

Reviewed by hops_for_thought from New York

Hit the bottle/can sales room on the left first - buy beer and walk-out but the space was very cool, barrels and medals all around. Staff here (and everywhere) very friendly, worth checking out the guest bottles for sale (3 Fonteinen and Wunderkammer when I was there)

On to the tap room, which had a massive window overlooking the brewery floor. Beers for onsite consumption plus a deli counter ticket system for growler fills. Nice size with standing tables and seating, can imagine the patio in the summer is beautiful!

One note, depending on the weather it can be pretty rough getting up there. Would not recommend a rental sedan in the winter haha