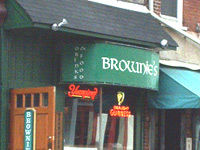 3.5/5  rDev -8.9%
vibe: 3.5 | quality: 3.5 | service: 4 | selection: 3
Stopped in mid afternoon on a Saturday and there were only 3 people sitting at the bar. The bar seat about 12 and runs the length of the left side of the room when entering. Other than the standard Irish bar offerings of Guiness, Smithwicks, and Harp, there is little here that looks like an Irish bar. There are plenty of Police patch displays, Phillies photos, and some beer signs for decoration. Mirrors provide an illusion of a larger space. Two big TVs sit on either side of the bar.

There is a separate pool & dart room upstairs, and the restrooms are strangley located on the second floor too.

They did have a few American micros on tap such as Yards Philly Pale Ale, Lagunitas Brown Shugga and Hairy Eyeball, and PBC Kenzinger. Hoegarden, Yuengling, and some macro lite was on also.

With all the good beer bars in the area this one is not a prime pick. But they still allow smoking for those who want a pint and a smoke.

3.8/5  rDev -1%
vibe: 3.5 | quality: 4 | service: 4 | selection: 3.5
Entering through the heavy wooden door and crossing the tile vestibule with its inlaid green "B", by taking a button-hook right, the blonde wood bar was just inside to the left. Sports photos lined the left wall, headed aft. The rough wood floor and mirrored ceiling reminded me of some motel rooms that I stayed in while in the navy. All of the way aft, on the left side through an archway, was a game room with two English-style dart baords and and electronic video game. All of the way aft and upstairs on a right oblique were the washrooms. Still upstairs, on a left-oblique, was another game room with two dartboards, foosball, and two cramped, Kramer-style pool tables.

They had fourteen taps and all of them were dedicated to good beer. They also had twenty bottles, but they were mostly BMC, plus standard imports, with Anchor Steam, Harpoon IPA, and a Yards as the lone standouts.

Finally, the red-haired, tattooed waitress did it for me. I'd go back, no problem.

Reviewed by DarkerTheBetter from Minnesota

3.8/5  rDev -1%
vibe: 3.5 | quality: 4 | service: 3.5 | selection: 4
Says from the outside that Brownies is an Irish pub of sorts, but once inside, that isnt so evident. Looks rather not-Irish, if you ask me, but attractive and inviting none the less. The bar runs the length of the left wall with some huge-ass television bookends, both of which were set to golf. Good thing I wasnt here for the TV. Behind the bar was very orderly and neat, kinda like grandmas house. There were also a lot of mirrors and a chalkboard in the middle with the tap selections on it. Running the length of the bar over head were several law enforcement patches in decorative cases. Other than that, decoration was minimal. The other side of the building, however, was a slew of picture frames with photos, news articles and and the like of what seemed to be local sports heroes. I wouldnt mind spending some more time some day just looking at this miniature museum. A neat touch that the place had going for it was that above these photos were some mirrors that ran up the wall and out onto the ceiling. The mirrored upper corner played some tricks with my eyes and added a lot of space to your typical, narrow Center City bar. Also, a few ceiling fans added a distinct home-like feel. Upstairs youll find the latrines along with a long room with two pool tables and one foosball table. Looks cramped, but doable.

The bartender was all right, but mostly left us alone.

I liked this place, but nothing really jumped out (other than the beer list!) at me that will mandate a return visit. Regardless, Brownies is definitely an asset to the Center City beer scene.

Reviewed by Dithyramb from Maryland

4/5  rDev +4.2%
vibe: 4 | quality: 4 | service: 4 | selection: 4
We left Plough and the Stars all riled up. I took control of the situation, pointed out that there were several other bars in the area that would be of better quality, dodged a few cars in the street, and headed right to Brownies. It was one of our last stops in a stream of Philly bars.

A group left as we wandered in and took seats at the bar. Shotgun style setup, going straight back with about three feet of room between the stools and the wall. Lots of mirrors around and a clean set of bathrooms upstairs. I could see this place being a VFW in a past life.

From what I can remember, a decent setup of brews. I had a Lancaster 4 grain on tap and a stout of some sort. The ladies had a Framboise. Those Philly BAs are definitely spoiled with all these quality beers on tap everywhere.

Bartenders were fast, friendly, and efficient. They were mixing tunes off of an iPod. Great sounds and a good time.

Reviewed by blitheringidiot from Pennsylvania

Brownie's has an Irish flair with a heavy accent on Police badges decorating the interior. They also have two pool tables upstairs, darts and the bathrooms are clean albeit cramped. Bar stools are comfy, but no backs so if ya tie on a load and fall off that's on you. Big screen t.v. behind the bar. The side wall has those little table that stick out of the wall to hold a beer with a couple of stools for when it gets crowded.

Our bartender was friendly and beer knowledgeable. She actually recomended checking out the Khyber around the corner. Brews were $4.00 a piece. I snagged a Yards. At least they had a local brew on tap. You can count on 5 of the 10 taps being realy good local stuff like Vic'ry, Yards and the like.

Last call: If you are in Olde City, this is worth a shot. This area gets mega busy some nights so I will remember this joint to check out when the lines are out the whazoo anywhere else.

Reviewed by whartontallboy from New York

4.31/5  rDev +12.2%
vibe: 3 | quality: 4.5 | service: 5 | selection: 4
I've only been in on weekends when its straight-back design that barely leaves enough room for the bar made things a little cramped downstairs. The tap list was pretty good, with all of the obligatory locals in addition to some imports like Lindemann's, etc. If you don't mind being jostled by the crowd, the bartenders make it worth the visit. On my last trip in, I argued the merits of DFH 60 Min versus 90 Min with one for a good three minutes, and then when my buddy tried to order an SNPA, he said, "No, look, this is better," and poured him a Troeg's hopback. I liked that sort of beer activism.
Jan 21, 2005

Reviewed by PSUDREW from Pennsylvania


Aside from that brownies is a really cool little place. Staff was pretty freindly. On tap was Stoudt's Scrlet lady, Celebration Ale, Pynk, Resurection Ale, amoung others. Has pool and darts, nice quite upstars to sit down and talk or whatever. nice place, for a small group

Reviewed by IrishRedRock from Pennsylvania

The bar is a bit cramped, and naturally on March 17th has a few more people than usual. Despite this, I made my way to the far end of the bar and didn't have any problem getting beers. Pretty good tap lineup...Lindemans Framboise was my choice, and it was excellent. I also noticed Victory HopDevil, but dont remember much else other than some Macros and Guinness. I don't know if there was any bottled beer to fall back on. The upstairs has 2 pool tables, darts, and a foosball machine that ate my 75 cents. Cramped, but a nice place to hang out with friends.

3.55/5  rDev -7.6%
vibe: 3 | quality: 3 | service: 4 | selection: 4
Until recently the tap line-up at Brownies has always been eclipsed by either the Khyber or Sugar Mom's. There's enough variety available on the market now, however, that you might find some interesting beers here as well. Of course Buffalo Billiards and Eulogy are now open just a block away as well. It's a small place, especially if you don't care to venture upstairs for billiard's, and it can get crowded. Still, that can keep it more comfortable if you want to stop in at lunch or early in the evening. The bartenders have always been friendly to me and I've rarely had a hard time getting a beer even when it's crowded. It might be worth stopping in here to check out the tap line-up, but you can probably have a more enjoyable night out elsewhere.
Nov 27, 2002

Reviewed by WilliamPhilaPa from Pennsylvania

3.78/5  rDev -1.6%
vibe: 4 | quality: 4 | service: 4 | selection: 3.5 | food: 3
Sits close to the Kyber and all the other bars on 2nd street. This is a cross between a sports bar and a Irish pub. The interior is very nice, dark wood bar. Upstair they have English Darts, billiards, and TVs and a Jukebox. On taps they have Guinness, Harp, Yards, Victory, Cafferys, Sierra Nevada Pale Ale, and Yuengling and a few other brews. As far as food goes, they have your basic finger food. I have to get a update on the bottle selection. Solidly represents a good Irish Pub...
Sep 06, 2002
Brownie's Irish Pub in Philadelphia, PA
Place rating: 3.84 out of 5 with 14 ratings