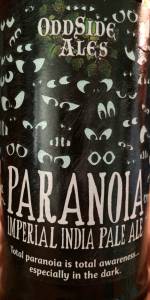 I picked up a bottle of Odd Side Ales Paranoia Imperial India Pale Ale yesterday for $2.39 at The Lager Mill. It's that time again, it's time for another new IPA from Oddsides, I'm interested to see how this one turns out, so lets see how it goes. No visible bottling date, but it just showed up recently. Poured from a brown 12oz bottle into a snifter.

A- The label looks pretty nice, it's got a bunch of different pairs of eyes staring out from the darkness and as a cool addition Oddsides made the eyes glow in the dark and I think that's pretty creative and I think it's very eye catching. It poured a slightly clear orangish amber color that took on more of a brighter amber color when held to the light with two fingers worth of creamy really light tan head that died down to a thin ring that stayed till the end and it left lots of spotty and patchy lacing behind. This was a pretty good looking beer, I have no complaints at all.

S- The aroma starts off with a slightly higher amount of medium sweetness followed by the hops being the first to show up and they impart a great mixture of berry, citrus and tropical fruit like aromas that seem to be a pretty even mixture with no one aspect seeming to stick out the most and I really like it. Up next comes the malts which impart some lightly toasted, caramel malts, brown bread and light sweet malt like aroma with a slight bit of doughy yeast in the background. This beer had a really nice aroma and I really liked the fruity hop profile.

T- The taste seems to be a fairly similar to the aroma, but not as intense and it starts off with a slightly higher amount of medium sweetness followed by the hops still being the first to show up and they impart a little bit of those fruity hop aspects that I got in the aroma, but this time there's more of floral taste to it. Up next comes the malts that seem to be a little lighter than they were in the aroma, but they still impart the same aspects that they did in the aroma, they are just lighter. On the finish there's a slight boozy flavor with a medium amount of high bitterness that lingers a little bit into the aftertaste along with some floral hops. This was a nice tasting beer, but I wish the taste was much more like the aroma.

M- Fairly smooth, clean, a little rich, a little sticky, on the lighter side of being full bodied with a lower amount of carbonation. The mouthfeel was nice, but I wish it had more carbonation and that it wasn't sticky and rich.

Overall I thought this was a decent beer and it was pretty close to being an average DIPA, once I got to the aroma I thought this beer was going to have a great hop profile, but when I got to the taste it started to fall apart a little and I was left with a floral and slightly fruity hop profile that was a little dull compared to the aroma. This beer had decent drinkability, it was fairly smooth, clean, a little rich, a little sticky, pretty filling and the taste didn't do the best job at holding my attention, I think one is enough for me since there isn't anything about this beer that makes me want to have another one in a row, so one is enough for me. What I like the most about this beer was the aroma, hands down it was the highlight of this beer and I thought it was really nice. What I liked the least about this beer was the taste and drinkability, there were both disappointing and they aren't really up to the standard that I expect from Oddsides. I wouldn't buy this beer again and I don't think I would recommend it, it's not hard to find a much better DIPA. All in all I was let down with this beer, I was expecting a pretty good DIPA and that's what I got till I got to the taste then it went all downhill from there. So far this is now my least favorite beer from Oddsides, but it isn't the worst DIPA I've had. I appreciate the effort, but I think this one would be much better if the taste was more similar to the aroma, better luck next time guys.

Pours a slightly amber orange with a light head of carbonation.

Overall, a let down.

A - pours a rich brown with an orange tint. Nice lacing and decent head retention.

O - Really solid DIPA from Odd Side - I'd have this again.