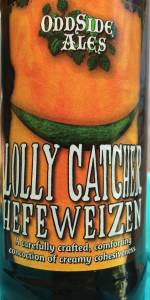 $1.99 for a 12oz bottle @ BevCo. MFG 7/8/14. Pours out to a clear golden with orangeish highlight. Minimal head, no retention, no lacing, Carbonation mild, ~2.0 carbs or so. The nose is of very green bananas and cloves, however tainted by some subtle hot asphalt and burnt rubber...weird phenolics. The mouthfeel is crisp and clean, somewhat watery with a medium light body. The taste is really a recap of the aroma...thankfully the asphalt and burnt rubber is quite subtle and doesn't ruin the beer. A little ruddy towards the finish. Bitterness is quite mild. Finish is clean, watery, kinda like soda water.
Meh, this doesn't do much for me. It's not a bad beer, but it's very one dimensional. The soda water mouthfeel kinda makes me think I'm drinking a alcopop.
L=2.75, A=3.25, T=3.25, MF=3, D=3

I picked up a bottle of Odd Side Ales Lolly Catcher last week for $1.89 at The Lager Mill. It's been a while since I've had a Heffeweizen and since this is a new beer from Oddsides I thought I would give it a try, so lets see how it goes. Bottled on May 2nd 2014. Poured from a brown 12oz bottle into a weizen glass.

A- The label looks ok, it's a little odd. but I see what they are getting at with the banana in a hammock, it's a little eye catching. It poured a cloudy golden color that took on more of darker gold and orange color when held to the light with a finger and a half worth of bubbly white head that quickly died down to a thin ring that eventually faded to nothing and it left hardly any spotty lacing behind. This is a nice looking beer, but I wish the head, lacing and retention were better.

S- The aroma starts off with a higher amount of sweetness followed by the yeast being the first to show up and it imparts some banana, clove and light coriander like aromas with the banana sticking out the most and it imparts a strong authentic and ripe banana aroma that seems to be the aroma that stick out the most in this beer. Up next comes the malts that impart a wheat, sweet malt, and a very light toasted aroma with a doughy aroma showing up in the background. This beer had a pretty nice aroma and it seemed to be dominated by the banana aromas.

T- The taste seems to be pretty similar to the aroma and it starts off with the malts being the first to show up this time they impart the same aspects that they did in the aroma with the wheat seeming to stick out the most but there's also a light bready flavor that shows up. Up next comes the yeast that still seems to stick out the most and it and imparts the same aspects that it did in the aroma with the ripe banana really sticking out the most and the spices showed up a little lightly in the background. On the finish there was no bitterness with just a little sweetness taking it's place and there's a ripe banana, sweet malt, wheat and estery aftertaste. This was a pretty nice tasting Hefeweizen and it seems to be pretty true to style.

M- Smooth, slightly refreshing, a little crisp, on the lighter side of being medium bodied with a slightly lower amount of medium carbonation. The mouthfeel was nice, but I wish it had just a little more carbonation.

Overall I thought this was a pretty nice beer and I thought it was a good example of a Heffewiezen, it didn't have the balance that some of the best of the style have, but it did have all the right flavors and aromas. This beer had nice drinkability, it was smooth, slightly refreshing, a little crisp, not filling at all and the taste did a nice job at holding my attention, I think I could drink a couple of these but that might be my limit since I think the strong banana flavor might start to wear on me, but I think it makes for a nice warm weather beer. What I like the most about this beer was the taste, aroma and drinkability, they were both equally nice and the highlights of this beer. What I liked the least about this beer was the appearance and the mouthfeel, they weren't bad at all, but they could use just a little bit of tweaking. I might buy some more of this beer this summer if I'm in the mood for a Hefewiezen and if your a fan of the style then I recommend trying it. All in all I was happy with this beer, it had pretty much most of the things that I look for in the style and I thought it was a nice change of pace from the IPA's and Saisons that I've been drinking a lot of so far this summer. It isn't my favorite Hefewiezen or my favorite beer from Oddside's, but it's still a nice beer nonetheless&gt; Nice job guys, keep up the good work.

We crack a pair of bottles, pouring into our Bell’s Weizen glasses. The brew shows an apricot coloring, with decent cloudiness, but not that lazy haziness you might expect from your typical hefe. Of note, the carbonation is ridiculously active, while the head recedes surprisingly quickly. The nose, however, is unremarkable and lacks surprises, giving your typical notes of cooled banana bread, fruity and banana-laden esters, gentle phenolic spice of clove, wet wheatiness, moderate lemony citrics, white flour, hints of coriander, and dull cereal grain. The flavoring is very malt forward, with more soured punch to the wheat base than most. Otherwise, the tongue dances with mineral, lemon skin, chilled brown banana mash, banana and light bubblegum esters, soured pale and adjuncty grain, white rice, singed toast, chemical phenols, light ethanol, and hints of black pepper and coriander spice. The feel is airy and watered, affording little cream or frothy satisfaction. The abv is easy, and the beer knocks back quickly without much stopping it.

Overall, we were in the mood for something a little different tonight, and since we haven’t had a hefe in a while, this seemed to be the ticket we wanted to punch. Stylistically, we felt things strayed a bit. The softness and sweetness of your standard hefe were just not overtly present here. The flavoring was soured, pushed far too much to the side of the wheat, without the corresponding spice and balance. We are, however, being rather nitpicky from a purely objective sense. We can envision many a summer beer fest-goer slogging this back in the midday heat, as it is light in flavor and feel, and again, disappears cleanly as a companion to easy conversation.