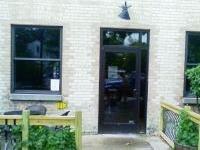 Odd sides was on my radar after my first visit to Grand Rapids in 2013 after having a few of there beers in bottles (Citra Pale Ale, Mocha Stout). By car the commute was about 30 minutes from Grand Rapids proper and had some picturesque scenery along the way. The brewery/tap room is located just of the waterfront of Lake Michigan inside a shopping center. It took a few turns around the block to find it (since I wasn't expecting it to be in a shopping area) but when I finally did there were plenty of seats available on this Friday afternoon.

A: The taproom had a large wood bar the full length of the place on one side with a half wall behind it cutting off the table and chairs area. The decor had kind of a surfy vibe and with few people in the place a very open airy atmosphere.

S: When I sat down, two of the staff members where at the bar next to me (drinking) and chatting while the bar tender poured a flight of beers for another patron. I chatted with them a bit and decided to do a flight also (5 4oz pours if I recall correctly.). The beers came quickly and in a newly created stave/glass holder.

S: When I was there they had over a dozen (possibly 18?) different beers available. Anything from the main stays (CPA, Bean Flicker) to some wacky stuff in barrels and a lager. The hoppy beers where fresh with no signs of off flavors and the barrel aged stouts where chocolatly with a hefty oak presence. My only qualm was those two flavors seem to define all of their beers. IE have a citra pale ale and have a mocha stout and you have a good sense of all of their beers. Maybe its a house yeast character (not sure) and not saying its bad, because I did enjoy it, but I like more variety in flavor profiles.

V/O: In all, Odd Sides was well priced and a cool little spot. I didn't get to see the actual brewing equipment which I typically like to do. But if you want to take a short drive outside of Grand Rapids and be close to the shores of Lake Michigan with some nice beers and a cool atmosphere, go check it out.

Love this place. Amazing beers, great atmosphere, more like a fun beer hall where everyone sits together. Just be friendly and you will love it. Met my wife there!

They are expanding to take up the most of the first floor. Oh by the way, it’s not in a strip mall like a previous reviewer stated. It’s a historical factory converted to retail and condos. Cool place!

Transparent tap list, including sizes, prices, and even to go beers. Incredibly affordable all around. Even the sampler is less expensive than I typically see (at least in the Detroit area).

No servers and tables are FCFS AFAIK.

The biggest plus, is they have one or more rare-er beers on tap often. This is a huge plus to any out of town visitor. You never know what you are going to run into while visiting. This is one place I'd like to be a mug club member just because of their willingness to put out their highly sought after stuff anytime of year.

If you happen to come here for a bottle release know that their prices (~$5 for a 12oz bottle) are some of the best special release prices you'll pay for a quality BA stout.

My wife and I sat at the bar and received good service from the bartender. He poured us flights, sold us t shirts and stickers and filled a crowler of a limited beer that I don't normally see on the street.

The prices were reasonable, t shirts started at 10 bucks (that stood out to me) the crowler was very reasonably priced considering the style/rarity of beer. They had some bombers for sale, but not anything that caught my eye.

The ambiance wasn't anything amazing, but the crowd there had a hiking/vacationing/biking kind of vibe to it at the moment. Pretty chill.

They didn't have their own food, but they had a menu for the place next door. We had two good sandwiches and paid the delivery person upon delivery, easy peasy.

Overall a good experience. They have enough taps that everyone should be able to find something to their liking. I hope to return one day if afforded the opportunity. (Bonus, they're close to pigeon hill in a neighboring town)

Hands down one of my favorite breweries in Michigan. The selection is unreal and the change up is great. I always enjoy a trip to Grand Haven just to visit! Beerjito still remains my favorite!

In a strip mall, felt more like a coffee shop than brewery, beer is very good to excellent, service is good at the bar, not much in terms of tableside service and the restrooms are community down the hall - not in the taproom. Excellent and varied taplist - no food, but can order in from a variety of places. Wish the vibe was better, but the quality and tap selection make a worthwhile stop.