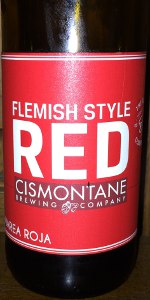 An average pour yields a one finger tan head. Quickly fizzing away. Not surprising for the style, but still not awesome. The body is a dark red, basically brown. Extremely cloudy. Visibility is basically zero, except for some shapes. Overall not a bad looking beer for the style, the cloudy, deep color looks nice.

The nose is musty, and funky, a little sour. Slightly sweet, with a very light cheese smell. A little vinegar is present. Sourdough bread. Overall a pretty nice smell. A little different and weird, but really cool. It’s a 4 or 4.25, I think I’ll go with 4.25, because it might not be the most delicious smelling beer, but it's complex and intriguing.

Definitely sourdough bread on the initial taste. Followed by a very carbonated water taste, quickly slamming into an undesirable grainy texture finish. On further sips that graininess smooths out, but the watery taste after the initial tastes remains there. Extremely light sweetness, not much in the way of vinegar. Not much in the way of funk on the taste, maybe a hair. I mean initially I was put off by this beer. It's settled down, but it still isn't hitting me right. The finish kinda has this rubber, metallic, yucky taste to it, hard to describe. A little vegetal, maybe mineral taste? It’s really hard to put my finger on, but it's off putting. I think a 3.5 is ok. It’s a decent sour, but the lack of good flavors, and the not so great aftertaste is not amazing. Kinda a burnt bread taste as well.

The mouthfeel is ok for the style, I don’t mind the carbonation, but the extremely watery mouth is less than perfect.

The drinkability isn't bad, it's light. But just not my favorite beer.

Overall it's ok. It's got some cool stuff going on, but it's a little too out there for me.

There was zero lacing, and no head after a few seconds. Still a pretty body, but the head hurt the beer. Overall an ok looking beer.

Poured from 500mL bottle into a tulip.

Appearance: rich, deep, dark red hue with no haze and a finger of frothy tan head that subsided relatively quickly. The color is fantastic.

Smell: lightly sweet and caramelly aroma with just a little bit of rhubarb tang. Not too bad, I suppose.

Taste: caramelly, slightly sweet and only a tad fruity. Again, the tartness has a kind of weird rhubarb quality. It kind of doesn't live up to the flanders red style, although in general it's not a terrible beer.

Mouthfeel: medium body with a decent level of carbonation and creaminess.

Overall: as I said before, it's not terrible. But overall there's not a lot to recommend this beer.

A — Pours a bit dark for the style, this is really on the darker side of the Flanders spectrum, it is a bit of a charred oaky brown hue. There is a rather tall head on it as well, does a great job of leaving lace behind.

S — Dominated by toasted oak and is quite funky for the style, predominately sour and astringent. Some lacto and barnyard funk comes through, very little fruit component, red wine vinegar.

O — Pretty good, but it seems to have missed the mark a bit, not super sour, and very oak driven and bitter.

Pours a murky honey orange with a foamy beige head that settles to wisps of film on top of the beer. No lacing on the drink down. Smell is slightly sour with grain, fruit, and honey aromas. Taste is much the same with slightly sour malt, fruit, and acidic flavors on the finish. There is a very mild amount of acidity on the palate with each sip. This beer has a lower level of carbonation with a slightly crisp mouthfeel. Overall, this is an average beer that is drinkable, but not a good representation of the style whatsoever.

The nose combines a slight funk, dark dried fruit hinting at fig, tartness and a suspicion of cherry. It pours rose tinted amber under a ½” white foam cap that quickly dissipates but produces sheets of lace. Offers a big tart palate with a tart and sweet dark bread finish, a hint of butterscotch with a mild bitter accent. The tartness is not overbearing – less acetic or lemony and more of a sour cherry type with a hint of cherry flavor. Has a medium body with above average carbonation.

On-tap at the source itself and served in a small goblet. Listed at 5.8% ABV. On to the beer:

Halfway between red and orange, this mélange offers little head on top and no lacing. As for aroma, it's sort of there per style. There's a kiss of strawberry and vague malt sweetness. The tartness appears stronger in the beer's taste, where the intensity is almost on target. Perhaps the big mouthful of caramel sauce has something to do with reducing the tartness. Mildly tart, very sweet. Imagine a caramel covered strawberry, but not as succulent. The beer is lighter to medium bodied, with gentle carbonation bubbles hitting the tongue with pleasure.

Not a bad beer per se. Taken on its own, I wouldn't mind going for another glass, though per style won't scare the Rodenbach's of the world.

On tap at the Barrel Republic.

Aroma: very fruity and somewhat tart, with a suggestion of lambic ale.

Appearance is a nice red gold, slight head that lays down to nothing. A bit of haze

Aroma is wood, cheese and dishwater

Taste surprisingly much better than the aroma led on, decent sour bite, something of a maple-like note, a little red grapefruit as it warms

Mouthfeel is ok, a little slick for a sour

Overall: hey, sours can be hit or miss. I've had bad bottles of one of my fave Flemish reds, so perhaps it is just a bad bottle in front of me. Color is good and the flavor is OK. I personally can't get past the aroma, closer to dirty laundry than beer. Not the funk I'm looking for, by any means.

The beer pours a deep burgundy red color, hues of brown and garnet when struck by the light, with a huge, airy, khaki head that rises almost 3 fingers high before fizzling into nothingness quite quickly. The aroma is of darker malt, light lemon and citrusy zest, some acetic sourness with light cherry at the end. The aroma is fairly tame, not overly complex or exciting, but inviting enough. The flavors are similar, dark malt hits straight away that provides a nice base layer of sweetness and flavor before lemon zest brings out the cherry, a bit of red grape and a fair amount of vinegar and sourness take over at the end. The vinegar qualities aren't terribly unpleasant, which is unusual, perhaps because it's not super pungent, but like the nose, nothing really pops on the tongue and the flavors aren't that complex. The mouthfeel is nice, lively, zippy, crisp but it coats nicely and has a fairly soft finish.

Verdict: A decent Flanders Red from Cismontane. It definitely needs some refinement and complexity, but nothing about this beer is boring or offensive, just simple. I'm definitely keeping my eye on Cismontane as they have some good potential.

Picked this up last night for $8.99 at a bottle shop in SoCal. This brewery has been hit or miss for me so far, but I've never tried a sour from them. Self-identifies as a Flemish Red/Sour Red on the label, so that's what I'm reviewing it as. 4.4% ABV confirmed. 12 IBU. 15 SRM. 500ml brown glass bottle with classy understated red label and standard unbranded pressure cap served into a Mitchells of Lancaster flared stem-tulip in me gaff in low altitude Los Feliz, Los Angeles, California.

Served cold, straight from the refrigerator, and allowed to warm over the course of consumption. Side-poured with standard vigor as no carbonation issues are anticipated.

Body colour is a dull murky copper-brown. Opaque. No yeast particles are visible. No bubble show.

Sm: Very light lacto yeast yields a timid sourness. Bready malt cuts the sourness, lending it an unclean character. Some lemon zest and mild acidity. Cakey. No real tartness or fruitiness is detectable. It's not fantastic for the style, but overall its appealing. No alcohol is detectable. An aroma of mild strength.

T: Very mild lacto sourness; not at all puckerworthy or tart. This would make a good intro beer to sours for the uninitiated. Some lightly bready and cakey malts fill out the body. No real hop character is present, nor is any alcohol. Very simply build; there's not much going on here. But it's balanced for what it is. I do get some light fruity notes on the climax but they're hard to identify - perhaps raspberry or cherry? Decently built for what it is. I do like it.

Dr: A very drinkable sour from Cismontane, but not a great one. I don't think it's quite worth the pricetag. I might get it again at a better price. It doesn't disappoint, but it doesn't blow you away. I'm looking forward to trying any other sours they put out in the future because this does show potential. It's pretty good for what it is but.

Pours a lovely clear dark redish orange with a firm thick white head that disapates rather quickly. However, nice to look at for at least several seconds.

Nose is something of an "acidic ester" quality. There is an undertone of Belgian esters but with a juxstaposition of citric stone fruit that goes to a watered orange juice nose. One's not sure what to expect at this point.

Mouthfeel is initially bleach in taste, and into the nose, as one drinks it. It's not bad, it's just a very strange sensation to go, wow! I know that smell/taste...laundry bleach. It then actually goes to a decent citric acid character with a puckery mouthfeel and citric character that gets one salivating...literally. I actually like the acid; many will not.

Flavor profile wants to be a Flemish red sour but it doesn't quite make it. It has the flavor profile and general flavors of watered orange juice or, going the other way, lemon water with a hint of orange juice. Here's the weird part...I actually like it; it's not however, what it should be or what it purports to be.

Finish is light and acidic with a fresh lemon and lemon water character.