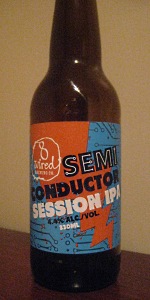 Notes: IPAs are great but sometimes you just don't want the amount of alcohol that comes with most of the good ones. In this spirit we brewed Semiconductor. an IPA designed to be drunk by the gallon, if you are that thirsty.

Translucent golden copper color which turns to be clear thereafter, it tops with thick creamy off-white head that stays with good retention before slowly collapsing to a long-lasting foamy layer and leaving some lacing on the glass-side.

Mix of tropical NZ and US hop in a nose, it is reminiscent of citrus, lime, pineapple, berries, white grape, leaf, and floral. Malt is also there based on the characters of bread, candy, and caramel.

The taste reflects the same like the aroma with varieties of tropical and fruity hop from both NZ and US origins as well as some bitter bite while malt is at the backbone of the flavor structure with its bread and some caramel.

Light to medium body with quite smooth mouthfeel and rather low to moderate carbonation through the palate, the overall feeling is okay while the finish is dry.

It is sessionable of course but still held lots of hop in both the aroma and flavor.

Reviewed by MAB from Canada (AB)

Reviewed by Martine from England

Aroma is very mild but one can detect subtle lemon, cream, caramel and vegetation. The flavour is very floral with dominant lemongrass, aromatic hops, gooseberry, elderflower, and something akin to medicinal lemon drops. There is a small hint of sour grapefruit and lime, and just a hint of biscuit underneath it all before the bitter hop finish.

In the mouth it feels quite carbonated, light, and dry.

All in all it's rather crisp, and drinkable but also very floral. I find this beer rather average, and a little too sweet for my tastes.

Reviewed by Andrewharemza from Australia

Lagery more than IPA, but the hop dose is there: super cutting finish. Not as fruity as I want a NZ beer to be. Quenching, harsh, and (at €8.75/$10) staggeringly expensive. 3.75

This beer pours a hazy, medium golden amber hue, with one fat finger of densely foamy and somewhat creamy ecru head, which leaves some calving iceberg lace in places on the glass as it genially abates.

The bubbles are fairly active and engaged to the back of my throat, the body just on the light side of medium weight, and plainly smooth, the hoppy astringency informing as one might expect here. It finishes rather dry, that chalky, stoney essence starting to overpower the lingering pine and citrusy hops after a spell.

An agreeable enough IPA, one of the not quite grown-up sort. That bit of pedantry aside, the most interesting part about this offering is the gulf between the aroma and taste - the promise of all that antipodean fruit goodness in the nose is quickly replaced by the oft-mentioned mineral character. No big deal, really, unless consistency of experience is your bag.

Reviewed by Hoptron_3000 from Australia

Overall Kind of sharp bitterness and flavor. But has a nice body and mouthfeel for low ABV. Nice dry finish.

Reviewed by danieelol from Australia

Taste is bitterness on a light body, grapefruit, more of the caramel-y malt.

Carries most of the flavours from textbook old-school IPAs (all the hops and malt) but coming in at a much more manageable ABV. Pretty nice effort. Would probably still opt for something Founders All Day IPA over this, but this one carries stronger malt and hop flavours on the whole. Bitterness and big malt backdrop does hinder sessionability somewhat, which is a bit of a drawback for a beer of this nature.