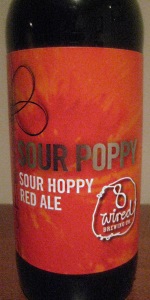 Appearance: It poured a slightly hazy copper red colour with less than a half finger off white head that dissipates quickly and leaves no lacing.

Aroma: Not very strong, but there’s lychee, grape, pine and some light sourness.

Overall: I liked it better than the Tall Poppy which is was what it was based off of. But as per the ratings, not many others seem to have agreed with me. The recipe is supposed to be quite similar but what I like about the Sour Poppy is that it loses the booziness and caramel malt that I was not too fond of in the Tall Poppy and replaced it with sour fruitiness which I preferred. However, still not the best from 8 Wired.

The first sniff was full of hoppy citrus and pine notes, the second more funky like an ageing cellar, and flanders red ale qualities. I got a bit of rust too. Caramel and floral notes. Really complex like a new brew with each breath.

Ok, thats really unique. Its got sour, almost watery fruit drink characteristics, followed by fruity pomegranate notes, then hits of sourness that go deep to the finish, hints of orange ahdncitra along the way, and pine. I get yoghurt, Brett, and fruity, floral bumps throughout. Almost a lactic quality too, hence the yoghurt. A little bitterness, sort of a toasted hint of burnt toast.

Got on Wishbeer, drank in Chiang Mai Aug 11th, 2016. Everything I expected, weirdness in a glass, but worth it. I can see why some would rate it low, as its not really well defined with so many notes. I think its pretty unique.

Reviewed by Trosevear from Canada (AB)

S: Sour but an acidic sour not a traditional sour.

T: Nice and sour with a fair amount of hop presence that cuts back on the sourness and the acidity. Has a nice mix of hop and sour and malt. Very nice.

O: Quite a nice beer but I defiantly like the hippy berliner Weisse better.

This beer pours a clear, bright medium bronzed amber colour, with a single chubby finger of puffy, rather loosely foamy, and uber alles fizzy tan head, which leaves a bit of receding high-dive splash lace around the glass as it quickly blows off.

The carbonation is solid in its supportive and not altogether playful frothiness, the body a decent middleweight, and generally smooth, as a strange melange of edgy hops and milky sourness can't help but have some sort of unpleasant effect right about now. It finishes off-dry, the base red ale kind of trying to reclaim what it has given up - first to the hops, and now to the funk and/or sourness.

Overall, another unnecessary treatment of a style that just doesn't get better with additional tom-fuckery. At least the souring is mild, and in that lactic sense, rather than the full-on Brett bullshit experience, so I suppose that this is OK, but by no means better than one of my favorite hoppy moments of 2012.