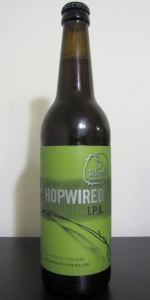 Notes: We're pretty sure HopWired is the first bottled new world India Pale Ale made with NZ grown pale ale malt and 100% unique NZ hops. We bet you'll find nothing else like it on the shelves.

Although there's plenty of malty sweetness, this beer is all about the hops. But unlike an American IPA, which will mainly challenge you with grapefruity and pine-like flavours and aromas, the kiwi hops used in HopWired produce something more like a tropical punchbowl: Passion fruit, limes, oranges and Sauvignon Blanc grapes to name but a few. A local Marlborough winemaker even said it smelled like gooseberries... Gooseberries? When did you last actually smell a gooseberry??

Decide for yourself, or just enjoy it without further complication. Cheers!

Poured a beautiful light tea color with lacing into a tulip. The head was a vanilla color, and there was good lacing in the glass. Served at 52 F(11 C).

The aroma was unusual: vanilla and light grapefruit. I don't recall smelling or tasting vanilla
in a DIPA, but the vanilla in this beer was strong in the nose, and continued after warming.

The mouth feel was well carbonated.

The beer didn't taste very hoppy at first. I expected more hoppiness, which is usually the strongest taste element in a DIPA. This beer was moderately hoppy, with some grapefruit- mostly a grapefruit rind taste. There was some bitterness.

Excellent DIPA. However, there is no bottle date. Perhaps the beer wasn't freshly brewed, so it was difficult to figure if the lack of hoppiness usually present in DIPAs was due to an older bottle or the character of New Zealand hops.

Aroma: bright citrus - orange grapefruit, lime - hinting at sweet and bitter; some spruce elements as well but generally it's on the fruity side

Taste & Mouthfeel: lightly oily, creamy texture; starts with a mild, simple, sweet malt flavour, but then the hops rush in with biting resin bitterness just barely caressed with lingering caramel malt; the citrus elements of the nose aren't present, this is all spruce tips; after time, things start to balance out and tropical, floral fruits gain the strength to balance out the hops very well -

Overall: it really becomes something interesting about halfway through, could make for a good sessionable beer with fresh, vibrant attributes throughout

A: Pours a wonderfully clear bronze with 3-4 fingers of big fluffy light tan head. Clumps of lacing scattered all over the sides of the glass.

S: Mixture of pine, citrus, tropical fruits and a slight skunkiness together with some sweet notes of caramel malts. Notes of floral scents and possibly coriander.

M: Pine notes are more dominant in the taste as compared to the smell together with orange peel, and tropical fruits. Mid notes of sweet caramel malts and finishes with mild bitterness.

O: This was a nice IPA with more tropical fruit presence and malts than what we normally have here in BC. While my shop just received this it was far from fresh and I would love to try again when fresh.

S: Bursting with trpical fruits lime lychee and a hint of gooseberry. Reminds me of great Nelson Sauvignon Blanc with a malty twist.

Pours a deep burnt orange color. It is quite cloudy. Very little head. Almost no lacing.

The aroma is very tropical with lots of mango and white grape. The smell of the sweet malt is very prevalent as well.

The taste is a surprising balance of hop and malt. The hop character comes off as very tropical, with some deep strawberry notes. The grape taste is not as obvious as it is on the nose. The malt is very sweet and compliments the strawberry flavors.

The bitterness comes through near the end leaving the tongue numb. This is a dry one for sure. The carbonation is hard to ignore as it leaves an almost stinging-like tingle.

Overall a very interesting beer. Having had New Zealand hops before, this one is still different. It doesn't have the usual skunk, nor the usual citrus. This beer is mostly dark fruit that is ultimately balanced out by a very sweet and smooth malt.