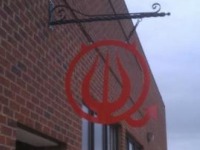 Rated by mattjp03 from Alabama

4.51/5  rDev +7.9%
vibe: 4.25 | quality: 4.25 | service: 5 | selection: 4.25 | food: 5
Stopped in today for lunch while visiting Allison's family in Chattanooga on vacation. It was mostly deserted and we sat right down. Our server Robert was terrific and was eager to make substitutions. I had the Chill Pils and Allison had the Sundress. My Smokestack sandwich with bacon and onion straws was simply outstanding, as were the pickle and skin on fries. Allison loved her chicken jerk tacos as well, although they were a bit greasy. It is a bright, friendly place with plenty of affordable beer to go options, and everyone was super friendly. I don't find myself in Huntsville often but I would want to come back here in a heartbeat.
Jul 06, 2022

Reviewed by HopHeadBob395 from Florida

4.15/5  rDev -0.7%
vibe: 4 | quality: 4.25 | service: 4 | selection: 4.25
This place is hoppin', pun intended. Went on a Saturday evening with football on, and in these parts that draws a crowd. They've got a good number of beers on tap, and the space holds plenty of people. I'd like to see a little more space for tables and a little less for merchandise, but they have to sell stuff to stay in business, I get it. If they ever distribute outside of the immediate area, I'll be on the lookout.
Sep 04, 2019

Reviewed by invertalon from Ohio

Straight to Ale has a nice space, split between an outdoor patio and indoor taproom with the brewery itself dividing those areas. Selection was huge, with about every style you could think of. From barrel aged sours, goses and fruited beers to imperial stouts, NE IPA’s, ESB and Milds and a variety of Belgian ales.

I sampled a flight of 5 beers… A fruited oak aged sour, Pilsner, NE IPA, BA Imperial Stout and fruited Gose… That way I can prospect a wide variety of what this place produces and go from there.

Unfortunately, I think this brewery might be an example of “A jack of all trades is a master of none”. The oak aged fruited sour was just not very good. Oaky, no real fruit character coming through. The Pils was a decent example, no real issue with that one aside from maybe a slight under-attenuation. The NE IPA “Juicy Bunny” was nice, run-of-the-mill NE IPA. The BA Stout was a bit tart and thin, leading me to believe there is a contamination issue with that beer. The fruited blackberry Gose was OK, nothing worthwhile by any means.

I would have tried another one or two options, but the five I started with didn’t leave me wanting more. A very middle-of-the-road brewery in my opinion. For better beer, head next door to Yellow Hammer where I found the quality a step (or two) above this place.

3.94/5  rDev -5.7%
vibe: 3.75 | quality: 4 | service: 3.75 | selection: 4 | food: 4.25
This brewery is in a old junior high/high school. The brewery takes up the original lobby, gymnasium and loading dock. So its hard to get a cool vibe from a place like this. The outdoor area on the loading dock is cool. The quality of the beer is decent and the food is very good. The service is fine. There is plenty to choose from off the food menu and the beer menu had 10 beers on tap. Food is very good....bacon wrapped pretzels is a must. There is also art classes, axe throwing, dancing lessons and another couple bars in the school as well.
Oct 27, 2018
Rated: 4.58 by Rubezahl from Pennsylvania

3.93/5  rDev -6%
vibe: 4 | quality: 4 | service: 3.75 | selection: 4
Pretty nice taproom, they converted a school into their brewery/taproom which was pretty rad I thought. The service was decent. The selection was pretty vast. It's a decent spot, wouldn't mind stopping back in the future.
Oct 09, 2016
Rated: 3.2 by clemsonalum11 from South Carolina

Rated by jmv0009 from Alabama

Reviewed by suzychesser from Alabama

Reviewed by zookerman182 from Alabama

4/5  rDev -4.3%
Fun place to go have a beer for the evening.
The bar area is small and so Is the brewery itself but what comes out of here is good.
Nice variety of their own creations on tap all the time.
Great location in south Huntsville.
They also hold some fun events on the property every week with food trucks and game night.

Reviewed by MOVERTON1284 from Alabama

3.94/5  rDev -5.7%
vibe: 3.5 | quality: 4 | service: 4 | selection: 4
Went on a Saturday for a tour. The tour was very informative and you got 4 or 5 tasting tickets. The tour was very informative, but it did seem to drag on for a while. You got to see the entire operation including canning line, barrel program, fermenters, cooler, etc. The taproom is tiny, so don't expect much there. They brew the best beers in Huntsville IMO.
Aug 06, 2014
Rated: 4 by richj1970 from Alabama