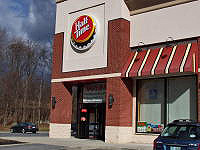 View: Place Reviews
Reviews: 165 | Ratings: 192 | Log in to view all ratings and sort
Reviews by TheLongBeachBum:

Heading south from Montreal with BA Erica on Route 87, a few punters at the Mondiale had mentioned that Half Time was on the way back to New York and JFK for my flight home to LAX, and like hey Man you should pop by cuz its an awesome place. Checking the progress back and the time, it seemed like we could manage a trip to Half Time and Poopkeepsee, Prekepsigh, Pugghesees, PowkowshyHalf Time.

Peeling off the 87 South onto the 299 East, then head South down the 9W, then back East across the Hudson River Bridge on the 55 and then head South yet again on the 9 (South Road), its all about an 8 mile drive South from the 87/299 Junction. As we drove South the store was on the left (Northbound 9) and facilitated an 180&#730; about turn, but thankfully there is one of those nifty turning circle thingies just after the store.

Handy parking area out front of the rather new looking brick exterior. Inside it is a sort of a Car Parts Place meets Beer World.

Atmosphere: for Beer Stores is not about how nice the place is, it is all about just how beery the interior is. And Half Time is mega beerystacked cardboard cases, more beer boxes, loose stand alone displays, rows of wall-hugging coolers filled with loose bottles and six-packs and several Supermarket aisles of bottled beery delights all arranged at a 45 degree angle to the front wall. Needless to say that the atmosphere is distinctly beery, it is hard to knock the arrangement, neatly laid out, and clearly labeled aisles by Country, yet it still retains that bloody hell I want to go beer hunting feel to the displays.

Beer Range Selection: is something else, I need not bother even trying to describe the brews on offer, if it aint here it is highly unlikely that you can pick it up, on the East Coast at least, I spied many, many brews that I never ever get to see over on the West Coast but all the ones I usually see, so it is not missing anything either. In addition to myriad of bottled brews a very nifty tap set-up dispenses draft beer to go in small bottles and a range of Growler sizes hanging from the roof nearby, could it get any better!?!?

Service: always a tough mark for beer stores. OK, so we have full marks for Atmosphere and Beer Range Selection but I feel Service on my visit at least was just average: For a start, I couldnt find any hand sized baskets anywhere even though I saw signs and an area for them, where were they!?!? I really didnt fancy getting one of the huge Spacker-Sized wire Trolleys so dip in marks there. I guess I could have asked where the Hand Baskets were..but there was, well quite literally no-one in the store!! I mean No-one. Erica and I could have robbed these guys blind if we had the inclination to, we might not have got far for sure, but the lack of human presence was a little off-putting. So what the heck, Ill just pick up my handful of bottles and hand-carry them around, pain in the ass as it was, so a few more lost marks there too. Right, check out timeerm, young kid could not make up his mind which till to use, which is rather annoying as I was already hand lugging my bottles around. Then he seemed to have troubles working the till and just scanning the bottles. Enter stage left from the back room experienced Dude who rescued the situation, grabbed a box and had me served in double quick time with no ID bullshit or silly hassles and any of that stupid shite you get in NJ. So.what to give, I think to be fair a 3.0 would be reasonable overall, it really does not deserve more from my limited experience and I say it as I see it.

Average Service aside, would I go again? Too bloody right, Im only *really* interested in the beer range on sale and the prices, the rest fades once I walk out with a box full of beer. To put it all in context: 1,800 Beers, 500 Microbreweries, 100 Delicious Styles from over 40 Countries  So is Half-Time worth a visit?erm, hmmm, erm, yep, hmm, well I guess so. If not, and you live in NY State, you could always deal with the guys on-line too! Lucky buggers.

Has a huge selection... thats it. The prices at this place are offensive. Expect to pay around 20% more for most beers there. And they nearly always allocate the stuff from the highly rated breweries so if you want to try it you are forced to pay there single prices which are horrible. There growler fills are also disgustingly overpriced. Check out there beermenus. 64 oz growler of xocoveza for $33. Everywhere else sells a six pack of it for $17. That's double the price for less beer. Don't support this store. A store this size should be able to have competitive prices. They are just greedy.

UPDATE: I absolutely despise what the greedy... person... Alan Daniels has done to Half Time. Service is almost non existent, you can get lower prices on beer shopping in Grand Central Station, old bottles (well dusted I must admit) are the rule of the day on the shelf, and it is a horrible shopping experience. I actually curse the place out loud when I drive past and there will NEVER be a day I set foot in the store again.

I want it to be known that I love this store. The selection is amazing. Today sucked though. Ive always come in here for beer. Today I went to get KBS, one four pack limit per customer. Now I know these guys aren't getting gouged by their distributors, but they really enjoy sticking it to their customers when they charge$36.00 for a 4 pack of KBS. Thanks guys, way to keep it honest.

Fees for deposits on kegs just not right. Returned next day. Over priced with a good selection.

Being about 20 minutes from Poughkeepsie, this shop serves as the ares local go to place, As far as the major complaint of being to pricey, I guess they are at the top of the suggested retail price. But when you are looking for good beer they will have it. Basically, If it’s available in New York they get it. I have tried many beers that I would never have been able to try if I didn’t shop here.

Can't say it has much of a "vibe" since it is just a store, but great beer selection. If there is anyplace else within an hour drive that can compare, I haven't found it yet. Pretty much the only place I bother buying at during the couple times a year I'm in the area. Got to give it a bit of a knock, however, for having prices higher than alternate locations.

Awesome beer selection. Spent an hour in the store and was able to get most of the beers I wanted to try. They fill growlers and even have cigars. Wish this place was closer to CT.

I re-reviewed this based on the overhaul of the place that was done in July of 2015 (and seems to be continuing).
Much improved growler section (same number of taps but better selection and variety: Alpine, Other Half, more appropriate seasonals).
The new black shelving makes their beer selection look smaller but they actually seem to have more beer and more varieties from brewers (ex. where they previously had 4-5 Ballast Point's now they have a wider array from them).
They mixed up the end caps to highlight some better breweries (previously it was Ommegang, Rogue, DFH, Bklyn) so appearance wise it seems more up to date.
A nice and long overdue touch was to add prices to the beer on the shelves behind the register so one doesn't have to ask anymore. A simple but smart touch.
Prices remain as just "OK". They know their beer so they will price accordingly for anything that has a buzz. Green Flash, Ballast Point, Maine etc. are expensive everywhere but this place seems to push it even a bit higher than other locals.
They seem to be modernizing the place a bit and making better use of he space. Always has a been a stellar store just needed some "freshening up".

And to date the website is useless (and they pretty much tell you so on their main page as it's being re-worked). Tap list is accurate but they don't update their new arrivals often.