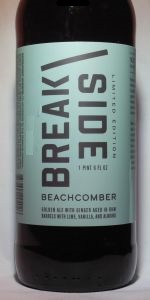 A beery tribute to our favorite Tiki flavors, Beachcomber began its life as a strong golden ale with fresh ginger, fermented with one of our favorite Belgian yeast strains. It sat for 11 months in Caribbean rum barrels, developing rich notes of coconut, molasses, and burnt sugar. We thought the flavors pointed so clearly towards Tiki cocktails that we decided to make a cocktail beer out of it, and aged the beer on vanilla bean, toasted almond, and a bit of lime zest. Mahalo!

A: The beer is slightly hazy dark yellow in color. It poured with a quarter finger high white head that quickly died down, leaving only some wisps of bubbles on the surface and a narrow collar around the edge of the glass.
S: Very strong aromas of rum are present in the nose—these are so powerful that your nostrils can pick them up when it is about six inches away from the top of the glass.
T: Similar to the smell, the taste has lots of flavors of rum, but these aren't at all boozy. Hints of vanilla are also noticeable in the finish.
M: It feels medium-bodied on the palate and has a low to moderate amount of carbonation.
O: This hardly tastes like a beer at all and seems to be closer to a cocktail mix as it's very flavorful but doesn't have alcohol in it. As such, it is deceptively drinkable and very unique.

Sample at beer meets wood last weekend.
Slightly hazy deep golden color with a bubbly white head, The nose and flavor of this is straight up rum like someone floated some Bacardi on my beer. Light earthy fruity beer underneath but really alcohol strong.

Poured into a Fremont small snifter. Pours a lightly hazy orange amber with a half finger white head that dissipates to patches with light lacing. Big ginger burst out of the bottle. Glass aroma is ginger, pale malt, brown sugar, more ginger, candied orange (actually those jelly oranges), almond and other exotic components I have no idea what they are. This is easily the most medicinal smelling beer I've ever had, and not in the usual camphor/sharp herbal way, but in a alcohol swab with medicine in it way. Oddly it smell pretty good, just odd and boozy. The flavor goes off in another direction, with ginger, orange, light stone fruit esters, brown sugar and coconut. Damn. It does kinda taste like a Tiki cocktail. The rum kicks in at the end along with lingering fruit esters, ginger and coconut. Medium bodied with sharp carbonation. I have never had anything like this one. I was ready for an interesting mess after the aroma, but the first taste was excellent, especially since I was prepared for something completely different. The flavor definitely leans towards cocktail territory rather than beer and it's impressive they pulled this off. The large number of strongly flavored ingredients (rum, ginger and coconut just to start) required great balance. And I think they pulled it off. I like this a lot. Not for the crowd that hates on drinks with umbrellas or served inside real coconuts, but for anyone who wants the most odd, but flavorful, Belgian strong you ever had, this is a must. I've admired Breakside for a long time and still can't they managed to brew this to taste so odd, but interesting. Even the lingering aftertaste is exotic and inexplicable, but appealing. This is somewhat dangerous; the ABV is not that well covered (it does taste somewhat like a cocktail, thus boozy from a beer standpoint), but the flavors are so darn interesting that it's hard to stop tasting it. Nicely done. I hope this is brewed again.