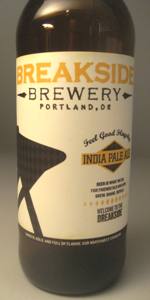 Notes: Breakside’s most popular offering is this beautifully clear India Pale Ale featuring the unique character of Citra and Chinook hops. This light copper beer has huge citrus and tropical fruit aromas with hints of perfume and pine. Flavors like apricot, guava, and orange hit the tongue accompanied by a mild evergreen note. There’s just enough caramel sweetness to balance the hop flavors, but this is really a showcase for the beautiful varieties of hops grown here in the Northwest. Like all Breakside beers, this has a notably dry finish and, in true IPA form, a restrained but persistent bitterness. It’s one of the most drinkable IPAs around!

Bomber bottle, I can find no bottling date/freshness info

Grapefruit and hop resin/pine on the nose.

Had it on tap at the Brewpub. Was a little surprised when it won the Gold Medal. It's fairly well balanced, but a little too much on the dry/piney/bitter side for me. Wasn't a go to IPA for me before and probably still isn't, but is a good representation of the style.

22oz bomber for $5.99. I only heard about this beer due to its recent GABF gold medal and I was skeptical. I must say I was pleasantly surprised. Nice orange color, good head. Aroma was fruity, piney, hoppy. The flavor was seriously hoppy, grapefruit, citrus, touch of hop cones mixed with pine cones. I think I have returned for three or four more bottles since the first one, great IPA.

From the NON FRESHNESS DATED bomber into a Sam Smith's perfect pint glass results in a very clear orange body capped by a tawny one inch fluffy head that slowly recedes into a cap of sticky foam,
Aroma is pungent grapefruit, pineapple and pine. Assertive and mouth watering. Reminds me of Pliny the Elder but more tropical.
Taste is superb, pine resin and grapefruit rind play a game with the barely discernible sweetness of the malts, the aroma pulls this one into the pineapple territory. Just magnificent.
Medium bodied, certainly something you wouldn't want to drink a ton of in one setting but memorable for the intensity.
Overall a stellar IPA that hits a lot of good points. Too bad they can't put a date on the bottle.

This was poured into a pint glass.
The appearance was a moderately hazy burnt yellow to orange color with a one finger white foamy head that dissipated within less than a minute. Light spider web stringy lacing slides into the beer.
The smell started off with some tropical fruit and brings in a nice amount of bitter piney-ness.
The taste moderates between the sweet part of the tropical fruit to the bitterness of the pine, doesn't seem like it necessarily connects but isn't a bad thing.
The mouthfeel takes the harshness from the bitter pine and slides into a light to medium sort of body with a fair sessionability about it. Carbonation felt good for the style and for me.
Overall, it has all of the makings of what could possibly be an exceptional AIPA but if that smell could just come together. Wish I knew how old the bottle is.

Pours about two fingers of head into my willi glass. The head is just barely off white. The body is a very dark orange, almost copper color. Visibility is medium. This looks like the most carbonated beer I’ve ever seen, so many bubbles. Head retention is flawless after a few minutes, I haven’t lost even a centimeter here. Overall very nice looking so far.

The nose is a tad sweet, malts are slightly on the darker, heavier end. Dank hops are pretty forward, piney, maybe a tad spicy. A little bit fruity, mango, papaya, melon. Fruitiness is earing on sticky, jam-like, the slightly sweet malt is probably contributing to that. Overall this is very nice, a tad sweeter smelling than I like, but only barely.

The flavor is fine, but noticeably character in the flavor than aroma, a little watery. That slight malt sweetness is the first thing I notice. Moderately bitter from middle to end, but again, way less than the on the aroma. Bitterness and hop profile are relatively boring and characterless. A tiny bit of fruit might be hiding in here, but it’s really not noticeable. None of the flavors dominate too much, so it is pretty balanced. While balanced, the flavor is similar to the smell, in that the sweetness, while small, is just a little too much for me in an IPA. I wonder if this is slightly past it’s prime, no bottle date though, so who knows!! Always print your bottles people! Anyways, overall this is fine, but it’s really lacking umph and flavor.

Carbonation is a deceiving as always – the carbonation here is definitely on the lower end, not flat or anything though. The body is about average. Hops have a small bite. Overall not a bad mouth, but the carbonation leaves a little to be desired.

Drinkability is good, it’s well balanced, and the sweetness is not a big factor. It’s in no way a bad beer, it’s tasty.

The appearance turned out as good as I thought it would. The initial head retention was just astounding, I’ve never seen anything like it on a non-nitro beer. Eventually the head started to dissipate, but it maintained a good lump of foam on top of the body the whole way down. Lacing was nice and thick from top to bottom. Amazing looking beer.

Overall this is a fine beer, but it’s just not contending with the big hitters in my opinion. It’s got all the key components, there just isn’t enough flavor.

The gold medal winner within staggering distance of my house? Truly a blessing and a curse. This is the real deal. I have yet to try I beer from Breakside that I don't like, but this is definitely their best.

This is a top notch IPA. Pours a deep orange/copper with a generous white head. The hop notes waft onto your palate with a good blend of pine and tropical fruit.

The big oily hops take the stage here whilst a sweet backend provides balance. Overripe mango and nectarine notes come through also. A smooth and almost creamy mouthfeel helps the 6.8% go down a treat.

My friends had this on tap at their wedding (just outside of Portland) and it was quite the favorite with all the guests. An outstanding beer that would be a hit in any state.

22 ounce bottle purchased from Tavour in Seattle, poured into a pint glass. Very enjoyable IPA. Maybe my favorite of any that I've tried from the Pacific Northwest.

Pours a not quite clear copper body with a very slightly off white head. Decent retention and lacing.

I'm getting a lot of pine at first smell. Followed by a grapefruit citrus. I think I'm getting a little sweet malt too. Overall scent was somewhat prominent.

Taste has the grapefruit out front with a little sweet malt. Great red grapefruit bitterness.. Very dry aftertaste. Nice taste overall, but the over the top dry aftertaste isn't quite working for me...

Overall; A decent northwest IPA.
....So why do I feel slightly disappointed by this beer ? I've been drinking Breakside's Wanderlust IPA for a couple of years now. It was the only IPA they sold out of state and It's an amazing beer (IMO). I reviewed it the first time I drank it and I gave it a bunch fives because, Well it's that good (again IMO). This beer was good but not like that. Guess Wanderlust just works for me and I will stick with Breakside's Wanderlust IPA in the future.