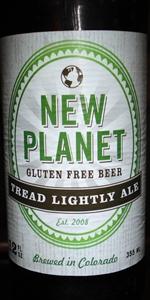 The beer pours a very clear and crisp straw color with only a faint ring tiny bubbles for the head and the lacing is near non-existant.

The aroma is slightly of sorghum and a little difficult to describe, lets try earthen and soapy, but that is only very faint and doesn't detract immensely from the other aromas of honey sweet apple and maybe a tad of hops.

Throughout the sip it is mostly like a honey type of maltiness and apple that covers the tongue and the finish is very faintly soapy, medicinal or metallic with a sort of sour aftertaste. It's not incredibly unpleasant but as you linger between sips the soapy is kind of weird. Slight notes of black pepper. It's not fairly complex, but this style really shouldn't be.

The mouthfeel is fuller than I thought it would be and lightly on the sweet side throughout the drink. It's slightly balanced but more sweet than not. The end is mildly dry, sour, bitter and that sorghum soapy. Carbonation is perfectly moderate. I can see this with more carbonation, but I think that would detract from it. Someone mentioned leaving the tongue a little slippery as well. I agree.

Overall, I enjoyed drinking this beer and learning. I would drink it again, but if there were alternatives I'd proably give them a go. I'm going to say this is average, but for what it's worth, it is NOT easy to brew gluten free and they have done one hell of a job to get even an average score in an actual American Blonde Ale class and that deserves points right there. It meets all of the criteria, but just has that taste, that sorghum taste.

A very lite crisp ale with delicate hints of citrus. Pours crystal clear with about a two finger head. Aroma is subtle, taste is subdued. I am ill experienced with “crafted to reduce gluten” beers, and I assume flavor is reflective of that. Overall light and sippable. Would probably enjoy while hiking.

Another beer courtesy of the captain of the canquest, woodychandler. Poured from a 12 oz. can. Has a light golden color with a 1/2 inch head. Smell is mild, some grains, a bit musty. Taste is of sorghum, light apple, bitter, but not in a good way. Feels light in the mouth and overall, for a gluten free beer, it's not all that bad, but I'll pass on another.

I reviewed this, in bottle format, a little over two years ago. Subsequent to that, I picked up a CAN in furtherance of The CANQuest (tm) & since today in NBS (Week 602) and I just choked down a JB's A Capella, I figured that I would take the opportunity to divest myself of some of the Gluten-Free backlog.

From the CAN: "CRAFTED TO REMOVE GLUTEN. New Planet TREAD LIGHTLY ALE is fermented from grains containing gluten and crafted to remove gluten. The gluten content of this product cannot be verified and this product may contain gluten." What a cop-out!

I Crack!ed open the CAN and was surprised to get a spray across my fingertips. This was acCANponied by some foaming through the vent, which upon settling, revealed a brimful craft CAN. Normally, I would rejoice, but this gluten free jazz was really winding me up good, so I turned it upside down for an inverted Glug and a sound spanking. This produced two fingers of foamy, rocky, bone-white head that hung in surprisingly well. Color was marginally Yellow-Gold (SRM = 4 -5) with NE-quality clarity (just not light enough to be deemed "Straw") & I awaited the arrival of The Gelt Gang of Croesus, Mammon & Midas. I was not disappointed, but they were! One sniff and they turned tail and exited Stage Left. Nose had a faint lemony-biscuity scent, but it still smelled off somehow. Mouthfeel was thin and one rung above watery. The taste was lemon & biscuit, but with a cheesy tang that I could really do without. Finish was dry, but I was left with an unpleasant cheesy taste in my mouth. Ugh.

I had a colleague who has issues with gluten and she was always curious about beers that were gluten-free. I usually eschew them since I am not gluten-intolerant and prefer to leave them for people who are. In the interim, I am purging my massive backlog of bottles this summer and lo and behold! this one popped up.

From the bottle: "Part of profits go to trail restoration."; "Ale made from sorghum and corn extract".

I have come to realize that there are no lees in these bottles, so there is nothing standing in the way of an aggro pour. Booyah! Two fingers of foamy, fizzy, bone-white head with poor retention, but at least there was nice lacing in its wake. Color was straw-yellow (SRM = 1 -2) with NE-quality clarity. I must say, when the beer that I am taking in is clearer and lighter than what I am flushing out, I am left highly dubious. It is also interesting that just a few beers in on this misadventure, and I am able to recognize the presence of sorghum on the nose. It is much like my sensitivity to corn as an adjunct/filler in AALs, having reviewed so many in the early days of The CANQuest (TM). But I digress ... It has a sharp sourness that really penetrates the sinuses, a cross between apple vinegar and being in an over-chlorinated pool environment. I do not find this at all pleasant. Mouthfeel was thin and watery. The taste was, once more, a tart apple cider-like flavor. I understand that I am not the target audience for these beers, but I am not sure that I would foist this on my colleague without some advance warning on what to expect. Would someone with Celiac taste this differently? I do not know, but I certainly hope so! Finish was dry, tart, slightly vinous, refreshing in an odd way, but not enough to be redeeming.

Ok. So my mother is a celiac, I'm always looking for new stuff for her to try.

This beer is awful. Honestly, yes. I took one sip and poured it down the drain. I really didn't even take time to smell it, but as I took the first and only sip, what I got in flavor and aroma was disgusting. I didn't plan on reviewing this beer but it was so bad that I thought I might leave some notes for those out there to try and warn them off.

As soon as it hits the tongue all I got was plastic and insane amounts of bubblegum phenols, over the top. Absolutely terrible. After one sip, the rest went to the sink. I couldn't and wouldn't recommend this beer to anyone. Redbridge is better than this, don't go here.

Apparently this "Tread Lightly" stuff is now being branded as simply "New Planet Blonde Ale". I like it, more to the point than before. Anyway, it pours a clear straw topped by a half-finger of short-lived off-white foam. The nose comprises soapy and funky wheat (I take this to be the sorghum), dry corn tortilla, and a dash of flowers. The taste holds notes of funky lemon zest, light cracked wheat, sweet flowers, and a kiss of honey. There's an odd and vague fruitiness pervading. The body is a rather light medium, with a light moderate carbonation and a slick feel. Overall, a frankly odd beer, one that just doesn't taste quite right to me to be in any way enjoyable.

Pours a clear light orange with a foamy off-white head that settles to wisps of film on top of the beer. Tiny dots of lace slowly drip into the remaining beer on the drink down. Smell is of grain, yeast, and some fruity aromas. Taste is much the same with a soapy and medicinal flavor on the finish. This beer has a lower level of carbonation with a slightly crisp mouthfeel. Overall, this is an average beer that is decent for what it is but nothing I would go after again.

A-Pours a glassy golden hue. Aggressive pours yields no head. Only a ring along the edges of the beer remain. The foam ring leaves ringed lacing remnants.

S-Almost nothing. A semi-sweet aroma is really all I can detect...Yeah, that's it.

T-Apple juice. All sweetness. However there is a tiny, miniscule grassy hop flavor on the back end. Also getting notes of kettle corn.

M-A bit fuller than I expected. Carbonation is very mellow. My tongue feels a bit slippery after. The sweetness clings to the tongue.

O/D-Mellow. The flavor was a big upgrade over the nose. It has a market. This was not as good as their raspberry beer, but it wasn't horrific.

Very pale golden color with excellent clarity. Thin 1/2 finger white head that fades to a thin lace rather quickly. Lots of lively and visible carbonation. Looks like a macro lager to be honest.

Tastes like a semi-sweeter macro lager with a bit of a strange fruit and plastic aftertaste. Light thin body but kind of tastes like chemicals. Even for gluten free, and especially for gluten free at 10 bucks a 4 pack, I cant recommend this one.

If you wanna get drunk and not smell like beer though, this might be the way to go! Has almost no actual beer ingredients in it!

If you're gluten intolerant, this beers not terrible. It's drinkable, but it drinks like a coors light so