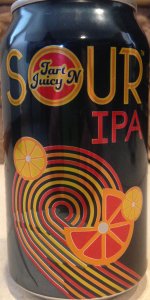 Notes: We've combined the clean, puckering tartness of kettle souring with an abundance of juicy, citrus-driven hops to create a beer that’s the best of both worlds - Tart n' Juicy Sour® IPA.

Does not contain dairy.

Reviewed by geearreff from California

Pours a slightly hazy amber color with a fairly small head that settles into a pretty even layer a little less than a half millimeter thick, with a few little craters in it. Smell is very mild...moderate bitterness and moderate tartness is all I get out of it.

Taste is also fairly mild. I get some kettle sour acidity, light bitterness, maybe a some general fruitiness -- I could believe a little bit of peach juice or something like that.

Mouthfeel is medium bodied, smooth. Overall...not digging this. Not terrible, but not very good.

Taste: Juicy grapefruit forward with the lactic aspect blending; from start to finish, the flavors swing back and froth between the two elements

Mouthfeel: Light to medium body with low to moderate carbonation

Overall: I enjoyed the blend of flavors here; others have complained about the lack of complexity as a kettle sour but I like it for what it is

Reviewed by Merlyn from Michigan

Reviewed by Weisenbeer from Ohio

Reviewed by johannyne from California

3.85/5  rDev +1.9%
look: 3.75 | smell: 4.25 | taste: 4.25 | feel: 3 | overall: 3
Appearance: Pours a translucent orange. Lovely head on initial pour. White and foamy, but the retention is minimal so it was gone fast. Lacing is near absent, especially absent toward the end. Visual effervescence is low. Love the color.
Smell: The aromas are fairly weak to moderate. What I do get is hoppy with notes of funk, but I cannot tell what kind...maybe brett? Kind of fresh onion-like and spicy with dank tinges.
Taste: A hoppy backbone of piney, citrusy (mostly sour orange) notes. There might be a note of dankness involved as well. Definitely sour, but not as much as others. The finish has a malt taste, weirdly caramel but not so strong.
Mouthfeel: Medium-light bodied. Slight effervescent burn.
Overall: Interesting to say the least. It feels more like an IPA but I get why Epic says it's also a sour. I'd recommend given how interesting it is.

Reviewed by bcgoldtoe from Michigan

Reviewed by Precisiondigital from Maryland

3.91/5  rDev +3.4%
look: 3.75 | smell: 4 | taste: 4 | feel: 3.75 | overall: 3.75
Grape fruit with hints of lemon and citrus. Not too tart but has a smooth finish and watery yet sikuotaneously creamy feel. Hops are in the background but not the slightest bitterness. I enjoy it as a summer ipa but I'm not crazy about it. Little bit if salt but not too much. Low alcohol content. Thought I tasted some lactic acid in there and then read other reviews and people said the same
Sep 03, 2019
Rated: 3.79 by Commandophile from Illinois

4.02/5  rDev +6.3%
look: 4.25 | smell: 4 | taste: 4 | feel: 4 | overall: 4
Decanted from a 12 oz (355 ml) can at The Heidelberg in Ann Arbor, Michigan.
A: Pours a hazy, amber color with a ruby tint, variously amber and ruby highlights, energetic, one finger head white formation, rim retention and remarkably complex lacing.
S: Tangy/tart and funky with aromas of green apple, delicious apple, vanilla, caramel and a touch of lactic acid.
T: Moderately art with fruit flavors, again green apple, delicious apple, vanilla, and caramel, as well as a touch of chardonnay grape and lactic acid.
M: Medium bodied with moderate but persistent carbonation. Lots of palatal tingling while consumed.
O: This reminded more of an unadulterated lambic or gueuze than any other American Wild Ale I have tried. Only real critique is that I really didn't really find any consistency with an IPA, but that is how it is labeled.

It must be New Odds & Sods Beer Sunday (Week 746) as I am delving deep into the backlog, pulling out bottles & especially CANs for The CANQuest (tm) & really getting at them! Once the day ends, you will be able to look back at the progression & see that there was actually method to the madness. In the interim, just hang on, it's a wild ride!

From the CAN: "We've combined the clean, puckering tartness of kettle souring with an abundance of juicy, citrus-driven hops to create a beer that’s the best of both worlds - Tart n' Juicy Sour® IPA."

No dairy?!? First, the previous one seemingly did not include lower-case "p" polenta & now this one does not CANtain dairy! I am really getting fed up! Good thing that the end is in sight.

Monty Python aside, I Crack!ed open the vent & beCAN a slow, gentle C-Line Glug until I could get the lay of the land. It poured pretty clear so I let it run until I got close to the kick. It was foaming on its own to form just under two fingers of fizzy, foamy, soapy, bone-white head, but with very low retention, quickly falling away to wisps. Color was Amber to Deep Amber/Light Copper (SRM = > 9, < 13) with some floaties in evidence, but since this was NOT an AIPA, it made little difference. Nose had a pronounced tart citrusiness with the kind of nose that I have been getting lately from kettle-soured beers. Hmm. Really, though, it was quite tart on the nose and my lips were puckering as a sympathetic response. Mouthfeel was kinda thin, but again, not a CANsideration since it was NOT an AIPA. It was quite tart in terms of its taste, though. The CAN depicts a grapefruit overlain by a lemon & that pretty well sums it up. Man, if you did citrus fruits, then this is your bag! If not, well then, I guess that yer own yer own. Finish was puckeringly dry, no getting around it. My real bugaboo was their labeling this as an AIPA. It is totally misleading & bears no resemblance to that style. Remember, boys & girls, rate to style & NOT to personal taste. 'Nuff said.