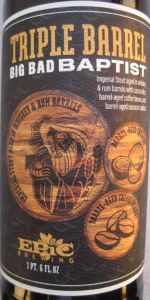 2017
L- brown/black with little to no head.
S- black licorice, baking chocolate, sweet bourbon, coconut.
T- licorice, bitter coffee bean up front. Coconut and hazelnut jump in mid palate. Oak and bourbon notes in the end. All comes together like a well played symphony! Cinnamon and almond as it warms.
F- thinner mouthfeel that comes off smooth.
O- I prefer other variants to this one, but a good one.

Fabulous, jet black syrupy pour. I had a 2017 vintage in 2020 (coronavirus antidote!). So, so smooth with the additional aging, coffee and coconut wrapped in a semi-sweet cacao blanket. High alcohol content completely undetectable. Delicious!

3/15/2019 - Smokey; seemingly bitter taste on palate yet coconut oil is slightly noticeable on back of palate. Seems like a bad bottle

I have been sitting on this for over two full years now I think. I know it’s aged well but I wish I had cracked it sooner! The coconut really makes it, the perfect amount. Glad I have another bottle!

L: Pours a thick pitch black with a small tan head that dissipates rather quickly and leaves a few small fingers of lacing.\

S: Sweet coconut interlaces with vanilla, a strong note of bourbon and alcohol, some sweet milk sugar and chocolate, a touch of roast. The coconut and bourbon are the major flavors here.

T: Sweet coconut, mixes with notes of bourbon and booze, bittersweet chocolate, a touch of milky sugar, vanilla and roast, a light to medium bitterness. Sweet but not overly sweet.

F: Body is thick but feels a bit thinner than most of the Baptist beers.

O: Once again another amazing entry in the Big Bad Baptist line.

S: Almond Joy candy bars and shaved coconut. Mocha and chocolate syrup. Layers of roast. Chocolate cake. Bourbon, barrel, and char are layered in there too. Red fruit skins and tart currant too.

T: All of what the nosed promised is here, but unfortunately so are the telltale signs of infection. That tart currant and tart cherry impression overrides all else.

O: It’s a shame. I can pretty much imagine how great this beer would have been if not for the infection. First I’ve heard of it or experienced with these guys, but barrel aged beer can sometimes be a gamble. This is a 1.5 year old bottle, and I imagine the infection developed slowly. I’ll definitely give it another crack if I see a newer vintage around.

I'm really glad that I have more bottles of this left, because this is drinking stupid good right now.

Following all the clamor and ruckus by various neckbeards and craft-drinking populaces that "Double Barrel" Big Bad Baptist wasn't quite double barrel in the sense that most would perceive it to be, Epic Brewing one-upped their potential fraudulent misrepresentation with a "Triple Barrel" BA Stout that has actually only spent life in two barrels. Not quite sure how this works, but apparently spending time in whisk(e)y, then rum barrels, and then adding barrel-aged coffee beans and then adding barrel-aged coconut to the mix makes this "Triple Barrel."
⠀⠀⠀⠀⠀⠀
If they wanted to follow up in the fashion of last year's potential Uniform Commercial Code §2-721 claim, they should have named this "Quadrupel Barrel Baptist" since there's arguably FOUR barrel components involved; or if they wanted to be more accurate in a way that doesn't provide grounds for an express warranty under Uniform Commercial Code §2-313, they should have called this something like "Double Barrel--BA Coffee & BA Coconut--Big Bad Baptist." Boy, that's a mouthful.

Nomenclatures that may or may not be subject to contractual / tortuous litigation aside, this brew delivers exactly what it purports to do while maintaining an admirable level of harmony spread out across its constituents.

Coconut and light rum are the first aromatic elements to jump out of the glass, followed swiftly by a mocha-like combination of medium-roast americano and cacao nibs. An almost Malibu Rum-like bright "sunshine in a bottle" alcoholic coconut scent remains consistently dominant throughout the drinking experience, with the mocha providing a nice subtle, yet balancing backdrop. No acetaldehyde detectable on this particular batch of Big Bad Baptist, which brings immense joy to my heart.

The composition of flavors on this beer is absolutely gorgeous.

Imagine you're having a bowl of cheerios. But instead of regular milk, you drown those poor pulverized oats in the shape of a solid torus in a Mudslide (the cocktail) except it's not frozen. Then you decide that you haven't made enough bad decisions already, and throw in a shot of Malibu into the unholy mix, and top it off with dark chocolate powder, and you're around the ball park of what this beer realistically tastes like. ⠀⠀⠀⠀⠀⠀
Somehow in that mix, there's also a slight hint of french vanilla and charred oak, which sparkle for a brief moment before being enveloped by Mudslide/dark chocolate powder. Reading the description on the bottle I'd thought there was way too much going on with this beer, but it turns out that out of chaos comes beauty.
⠀⠀⠀⠀⠀⠀
Sexy medium veering towards full body, with a creamy consistency. This beer is borderline chewy. Trace amounts of carbonation, typical of a Double/Triple/Quadruple Barrel-aged Stout. One caveat would be that although there's no heat detectable, this drinks more like a 14% beer than an 11%; I may only weigh just slightly less than four-fifths of an adult male red kangaroo, but I can usually solo-dome bombers with relatively no problem. DB/TB/QB BBB however, is kicking my ass right now.

Pouring from a 22 oz. bottle from 2017, this beer pours out not quite pitch black, but very dark brown. It forms two fingers worth of frothy, thick and creamy, peanut butter fudge colored crown that leaves a heavy wall of lacing as it slowly recedes. Epic does great on making sure these beers look beautiful. I honestly wouldn’t ask for more from this. 5

The smell brings that tropical, coconut like rum to the front line while backing it with faint chocolate. I hate to say it, but the coconut in there is almost reminding me of something medicinal; like an artificial coconut or being at the dentist for some reason or like if they made a coconut cough syrup. It’s off putting to me. It could be the rum too. It’s not letting much else through for me, either. 2.75

The taste comes in an absolute mess. Were these infected? Or is it really just the way everything is mixing for me? Whew, I’m getting an array of things, from cherry, cough syrup, artificial coconut, tropical suntan lotion rum. I think the only quality that isn’t bothering me is the very faint chocolate. This just tastes cheap. No whiskey or coffee detection. 2.75

It has a cherry like tartness to it. A dry kind of burn, but cough syrupy sweetness. 3.25

Overall, it’s tough to finish a glass for me, let alone a bottle. I hate that too, as I am usually in love with the Baptist series and fully expected being high on the rating here because of my experiences with the others. What a strikeout. I’m done for the day. 2.75

22oz bottle. 2017 vintage, Release #6. 11.4%ABV.
Black colored body, with some garnet colored back lit highlights. Two fingers of light tan head, which settles to thick creamy and bubbly cap. Leaves behind strings of lacing.
Aroma is a mix of barrels with quite a bit of rum, flake coconut, and cacao. Coffee is very faint.
Taste is a very pleasant blend of whiskey/rum barrel soaked chocolate and coconut. Later the coffee arrives in the flavor profile. The aftertaste is mildly coffee bitter but not bitter per se.
Medium plus mouth feel, with a touch of smoothness. Very good carbonation.
I like how the sweeter coconut and chocolate fill the mouth first and then the coffee comes in to balance with a touch of its bitterness. Barrel aging is there but does not overwhelm or increase the booziness. Very easy to imbibe.

Appearance: Black in colour with an almost one finger dark beige head that had decent retention and eventually settled to a thin layer and left some nice spotty lacing.

Overall: Loved the aroma and great easy drinking flavours. Body was a little light, but other than that, everything was just so good, especially the coconut.

O - damn that coconut is tasty.