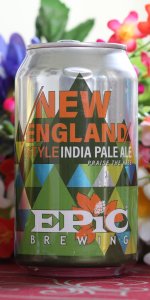 Smooth! Like Natalie Portman doing ballerina stuff in Black Swan smooth! I mean we are talking Christina Yamaguchi landing a triple lutz smooth! Beer is orange and heavenly as hell with all kinds of passion and stone fruit on the nose. But that’s not where the damn things shines, like Vittoro de Sica giving my loafers a polish, this thing is spot on! Huge tropical fruits that land easier than a SpaceX rocket!

Nose citrus, a bit of rind and pith, tangerine and a little lemony, touch of pineapple and tropical notes, faint sweet candy malt

Overall not bad for an IPA, but misses a lot of the marks for a true NEIPA, but not bad.

Confession -- I haven't had an actual New England IPA, but from watching a bunch of youtube reviews, I can kind of gather what the benchmark is.

This beer is quite pleasant -- poured from an undated 12-oz can (but from a reasonably trustworthy bottle shop), it has a minimalist white head and cloudy straw appearance.

Aroma is orange and citrus forward. My nose is not good enough to differentiate tangerine from tangelo, but something in that general spectrum -- very nice.

Taste follows the nose but maybe a bit weaker flavors. Not much alcohol or bitterness make this a crusher, but a reasonably sophisticated one.

I actually liked this beer for precisely the same reason many seem to have not liked it. While the can does say "New England Style IPA", you still must rate the beer individually, not on some arbitrary idea of what you think it should be because of the style. It's certainly not what I've come to expect from the style, but I'm also much more of a West Coast IPA fan, and this almost felt like it was right in the middle. Juicier and and hazier than a typical WCIPA, but more bitter and dry than a typical NEIPA. Personally, I really enjoyed this beer for what it was.

Lots of tangerine, orange and other citrus in the nose and in the palate of this NEIPA. Smooth mouthfeel, moderately carbonated and the alcohol is virtually undetectable, despite its 7% ABV. Amarillo, El Dorado and Centennial hops do their work nicely against a good malt backbone in this nicely balanced, juicy, complex beer. If you’re a NEIPA lover, this one is a winner.

Noticed cans of this product at a CBC Massachusetts beer store and decided to give it a try. Discovered it was a surprisingly good New England Style IPA from a Colorado brewer. The can says "Praise the Haze" and I think the product lives up to that comment. I don't know much about Epic Brewing as it doesn't, to my knowledge, distribute in my home state but this particular product is a winner that I'll purchase again when the opportunity arises.

Dull golden hued and massively hazy. There's a fingernail of eggshell around the rim. The aroma is a blend of mango, peach, and other tropical fruit. I'm tasting mandarin oranges, bananas, and peaches. It's like a sort of tropical fruit punch. The mouth is resinous and sticky.

This is a New England style AIPA that will make you a fan of New England AIPA's. It's what's right with the style.

It's cloudy and yellow and fizzy, Pretty. The aroma is strong and hoppy. The taste is bitter but also hugely malty. Wonderful. It finishes bitter. Nice.

12oz can. Poured out a cloudy, golden orange color with a small, white head of foam. It smelled of orange, pineapple and mango. Sweet tropical fruit flavor with some caramel and a mild bitter bite.

Very hazy gold with one large finger of white head. Head lasts about five minutes, rings of lace.
Smell is fruity and sweet.
Taste is citrus zest resin strong malt support.
Mouthfeel is medium with just enough carbonation. the finish is mildly dry and bitter.
Overall a tasty beer that drinks like a pale ale. Worth a try for sure.

-AKA Pulp Addiction. in spiegelau ipa glass. 9 on the haze factor. 10 on the juice factor and a modest 3 on the dankness facotr per can scale.

A: An almost orange soda coloring, far from the reported 9 on the haze factor, was a bit dense, but far from juicy, with a lot of light around the glass edges. The coloring seemed almost fake, a soda like color, not really orange juice,but bright, not really juicy or thick. A thin creamy chalk white head is quickly lapsing. Inside a slow and steady rise of effervesce is macro-bubbly, while the lacing on the vessel is weakly holding and covering. A bit of a disappointment per the cans anticipation and vs. similar by style.

S: Fresh pineapple juice, fruity with a support of mangoes and oranges of modest strength. I'll give this a 5 on the sliding scale of aromatic support. Some dank oranges, pine and dank flowery hops offer some glimmering hope in a modest serving.

T: The flavor opened with a bite of citrus-orange, fairly sharp, flavorful with a bitterness of pine and dank oranges on the finish. A hint of orange cream soda, grapefruit and creamy citrus. Some tropical notes are faint with some peach highlights perhaps from the yeast. A decent lingering hop bitterness occurs.

O: Kinda a miss on the appearance, while the nose was only moderate in strength and complexity vs more well known and expectations per style. No really big burst of fruitiness, while the flavor was adequate, but somehow just doesn't cut it in the competitive world of NEIPA. The flavor was more orange cream soda, some background of tropical fruit, but misses on the dankness factor, which is no surprise as the can pre-warned me of this. This was a marginal example, as their other neipa seemed to be rated much better. Not much excitement here, appearance, aroma or flavor wise as well a drink ability factor that was more cumbersome. Much better examples out there, wouldn't waste more then a single purchase here, which is a shame because Epic makes some good beers.

The aroma brings out an array of citrus notes including pineapple, orange, and lemon, with a more muted white bread character.

The taste begins with the citrus juiciness but then it detours off to an odd sort of spicy or tobacco-like finale. Except for the way it finished it wasn't bad.