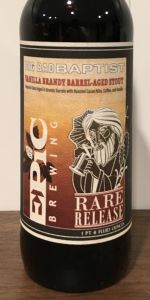 Pours dark like coal. Head is tan but is scarce. Nose is boozy with a charred smell. Taste is smooth as can be. Deep chocolate with a slight charr flavor and the ABV warms the throat. Great Stout!

Big Bad Baptist Vanilla Brandy Barrel-Aged Stout (2019) from Epic. Purchased on 27/1/21 for $ 17.00 (Including tax) for a 22 oz bottle ($ 0.773/oz) from Franklin Beer, Franklin, PA. On the room temperature shelf at store and stored at home at 42 degrees. Reviewed 21/2/21. (Note: I use DD/MM/YY protocol.)
Stamped on label “REL #2 12.7% ALC/VOL SLC# 6466”. There is a sticker band over the neck and cap which says “2019”. Served at 47.3 degrees in a hand washed and dried Jester King snifter. Final temperature 54.6 degrees.
Appearance – 3.5. Basically, looks like every other Imperial stout.
First pour – Brown (SRM 20), clear.
Body – Black (SRM 40), opaque. When rear-lite, still opaque with some ruby at the edge.
Head – Average (Maximum three cm, aggressive center pour), fallow, high density topped with some rocks, average retention, diminishing to a 0.2 – 0.3 cm crown fed by effervescence in a few places, and a complete cap.
Lacing – Fair. A short band of near-microscopic bubbles forms on the glass.
Aroma – 4 – Begins with chocolate, weak brandy, and weaker vanilla. No coffee, no hops, no yeast. As it warms, the aroma weakens to only the chocolatey
Flavor – 3.75 – Begins with moderate chocolate and a light brandy oral burn. Is that a hint of cherry? No hops, no yeast, no coffee, no vanilla. No alcohol (12.7 % ABV, as marked on the container) flavor or aroma. A slow gastric warming occurs in the background after the initial brandy has burned out.
Palate – 4 – Medium, approaching creamy, soft carbonation.
Final impression and summation: 4 I’m beginning to like brandy barrel-aged brews better than bourbon, maybe because the brandy is generally noticeably present and, so far, hasn’t beer harsh and choking.

Superb sipping stout that has three phases from the top to bottom of the glass. Pours dark brown with an amply tan head. Great complexity at the onset--somewhat sweet brandy tones underscored by vanilla, with chocolate notes and then a strong roasted component at the finish. Half way down the glass, the brandy takes over, suppressing other flavors to the point I was thinking of rating the beer lower for losing its earlier complexity. But then toward the bottom of the glass, the parade of flavors--vanilla, cocoa and roast blend with brandy--return for a sensational finish.

One of the many beers that were supposed to be shared with rudzud, RIP Space Cowboy. 2019 release #2

Overall pretty good, not as much brandy as I would have liked, but the rest of the beer was great. Really would have liked to go through this full series with rudzud. I miss you dude.

Got this one from the speciaalbierexpert in NL.

SMELL: Brandy, oak, and a level of tartness to it. Cacao and vanilla cream come out more as it sits, as does some roasted coffee aromas. A touch tart, just like the base version. Might be the coffee.

TASTE: This is a bit better than the nose. Brandy, oak, some light tartness, but this is definitely from the burnt and roasted coffee, some vanilla cream and cacao, as well as some rather harsh alcohol at the swallow. Big finish with plenty of brandy and booze, some cacao and vanilla sweetness, as well as some roasted and burnt coffee flavors. Boozy and somewhat harshly roasted character.

PALATE: Medium body with medium carbonation. A little foamy on the palate, goes down okay with a bit of a burn and finishes somewhat mouth-coating. A decent amount of heat lingers. Same as base.

OVERALL: This is maybe a little better than the original version if you use your imagination, but it’s not quite all that great either. The color is still light, though I guess I couldn’t have expected that to change, and the brandy barrel has made it rather harsh. There is less tart character in the flavor, though that may have just been exchanged for a rather harsh burnt quality instead. Either way, I’d choose this over the base, but I’d probably choose something else first anyways. Pass.

Pours jet black in color with a one-finger creamy khaki head that has good retention. Smells of straight brandy barrel, with undertones of chocolate, toffee, char, vanilla and raisins. Taste is dominated by brandy up front, with that signature charred malt poking through from the base beer. Undertones of chocolate, caramel, red grapes, coffee and a hint of vanilla. Heavy body with moderate carbonation leads to a creamy mouthfeel that chewy finish. Brandy dominates this variant

Quite a nice brandy imperial stout with good balance of flavors and depth. “2019 edition” printed on bottle. Pours a darker honeyed rust brown color with some off-white head and a little spotty lingering lacing. Smells of malt, brown sugar, vanilla, bread, nuttiness and some medium roast coffee and milk chocolate. Tastes similarly, great balance and depth. Has a very unique flavor profile which was very pleasant. Smooth, mild slightly sticky mouthfeel with a good amount of carbonation. The higher ABV was more present as the beer warmed, but this did not have to be a slow sipper. Nice.

Look - black syrup with a good tan head slight lacing
Smell - roasted vanilla with a slight cacao and coffee, some toffee
Taste - Just like the scent but with a slight spice to it
Feel - medium full body light carbonation Slight creamy
Overall - really great complex beer. You really taste everything they say they put in it and it’s really well balanced

I’m a sucker for sweeter coffee and this does it with the vanilla and brandy barrel. Definitely a winner of the BBB beers, which are almost all well done. The components just seem to meld well together!

T - The taste is vanilla, dark chocolate, coffee, roasted malts, oak and a nice boozy kick from the brandy barrel.

O - This is really tasty. Nice dark flavors throughout with the brandy barrel really shining in the finish.

what an absolute treat this thing is! my brother in law brought it over months ago, we never got to it, i saved it until he visited again, and finally we got into it last night, worth the wait! a unique blend of flavors here, the brandy, the vanilla, and an absurd amount of coffee, this was really impressive, and it hides its strength well, totally snuck up on me. there is hardly any head on this, although we pour it pretty slow. its black, but not as obviously viscous as some of the others in the lineage have been. its not thin either, but doesnt look intimidating. the aroma and flavor are killer, the barrels and the brandy are both intense, woody and wet and mature, less roasty to me, maybe the barrels dont have the same char as the whiskey versions of this, but it seems smoother, mellower. the vanilla is way behind the coffee, which totally dominates. this is like chocolate covered espresso beans and the crema off a perfectly pulled shot, rich and intense from front to back, really hits instantly and never leaves, but i do get more and more of the vanilla as i let it warm up, a vanilla bean thing, perfectly cohesive with the brandy. i get some light raisin, tobacco, and licorice spice in this, extremely well refined overall, and somehow not as thick as a lot of them, dare i call it drinkable at this abv! very dynamic beer, not overly flavored, still the legendary stout at its core is identifiable, and really a treat to drink with my brother in law as a night cap last night, i would rank this among my favorite baptist versions for sure!

The aroma is a little subdued - sweet creamy lactose and vanilla with some vinous booze and a little roast and chocolate.

The flavor is sweet lactose and vanilla with big roast chocolate malt and some fruity booze. The mouthfeel is medium bodied with low carbonation.

Overall, a big mash up of flavors. A bit low of aroma and body.

Pours a dark brown, opaque, thick looking, with a half inch head and some spotty cling. Aromas of brandy, vanilla, malt, coffee, chocolate, some cocoa, a generally spicy aroma. Flavors are similar- brandy, chocolate, coffee, vanilla, malt, cocoa, some oak. Smooth, a very good full body although a little lighter than others in the series, well carbonated.

The brandy barrels work well with the solid base, the cacao nibs are excellent. The lighter feel is certainly not a negative. Very enjoyable and well worth a purchase.

Pours black with a persistent layer of tan head.

The nose is dark chocolate, brandy, oak, and a subtle savory note.

The taste is dark chocolate, vanilla, brandy, and mild booze.

The mouthfeel is medium+

A layer of tan foam barely covers the black as coal body. A dark chocolate overload for the nose with some brown sugar & a hint of brandy, definitely one of the prettiest aroma. Very sweet with mild bitterness. Lots of dark chocolate flavor, oak flavors, coffee, brandy, vanilla & more chocolate. Mmmmmm. Thick & smooth as silk. A delicious chocolate brandy candy!