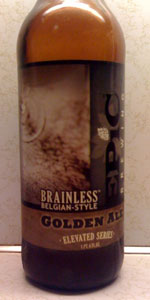 Notes: Brainless Belgian-Style Golden Ale is has a rich and complex malt flavor balanced with a little bit of spicy noble hops and strong influences of fermentation esters from the Belgian yeast used. Various Belgian like Rock Candies, hops and grains are employed to express variations within the style. Deceivingly drinkable, some liken theses ales to Devil sneaking up on you, so consume responsibly.
View: Beers | Place Reviews
Reviews: 65 | Ratings: 213 | Log in to view all ratings and sort
Reviews by hopsputin:

a: there is chill haze on the glass, but it is a pretty clear golden amber/straw color with a hint of orange. poured a 1 finger white head, but that quickly fades as i type, and settles around a thin film on top

s: massive ripe pears, green apple skin, and a small banana note in there. behind the fruit is a nice lemongrass aroma followed by sweet grass, nice malts, and a little bit of citrus zest. there is some Belgian-spiced yeast in the aroma as well; not too strong, but there enough to cut some of the sweetness and fruit

t: taste follows the nose pretty well here. there is a big blast of ripe fruit upfront - pear, green apple, and some banana. there is some clove mixed in there as well which is nice. behind that is nice sweet malt presence, as well as a big bready/cracker malt presence that dries out the flavor in a good way. there is a very subtle hint of funk in here as well, though I don't believe it has any brett. finish is fruity and has a little bit of peppery-spice in here. no real alcohol presence at all, making this very dangerous

o: a nice representation of the style, but has a few flaws that prevent it from hitting that next level. i'd like to see a little more spice from the yeast in here, as well as just a bit more carbonation. that said, its not a bad beer, and i would drink again for sure

I have been on an IPA kick lately and being in Utah you only get what the MAN will give you. I have found that IPA's are too bitter for me, that is why I am pleasantly surprised to find my new favorite beer, EPIC Brainless Belgian. I, like most of you, search the Utah Isles for decent alcohol content, which this beers falls into. Unlike most of the really bitter IPA'a, this has a rich, flavorful, content that will keep me coming back for more. Not bitter at all. LOVE!
Sorry that I am not as descriptive as some of you beer snobs. You do make me laugh though.

Was worried this would be flat as the pour produced absolutely no foam whatsoever. The hue itself is quite nice- a light, translucent amber. Aroma was hard to catch without a head on the beer, but did pick up some apricot, which was also the main notes to the taste. Effervescent, very boozy. Pretty satisfied with this.

Looks like your average lager. Not very cloudy, which is what I’m used to for Belgian styles. Wheaty banana smell. Nice refreshing taste. Flavors of caramel, banana, bread. First beer from Epic. Not bad. Would for sure try some other styles from them.