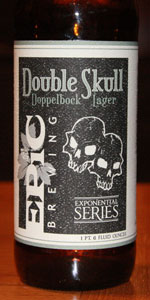 Notes: Originally brewed as liquid bread by fasting monks this Doppelbock is rich and filling. Crisp and delicious for the winter months.
View: Beers | Place Reviews
Reviews: 58 | Ratings: 180 | Log in to view all ratings and sort
Reviews by Brutaltruth:

Enjoyed form the 22 oz bottle in a snifter. This nice doppelbock pours a bright mahogany with a nice head of off white foam that settles to a thick ring and nice layer with solid lacing. Nose is light for the style with subtle bread and brown sugars notes. Flavors exceed the nose with rich brown sugar and breaded malts on the front and middle with a nice touch of dates and warming booze on the rear. Smooth and highly quaffable mouth feel that is full and moderately coating. Very nice. Would have it again!

Excellent, ridiculously underrated Doppelbock. I like it better than Weihenstephaner Korbinian or Spaten Optimator. Glowing dark amber, clear body with a creamy off-white head. Smells and tastes of toasted bread, malt and Doppelbock sweetness. Decadent, rich mouth feel with low-to-moderate carbonation. Packs quite a punch at 8.3% alc./vol. (2014 edition). A steal at $4.49 a bomber if you like Doppelbocks.

9.0%ABV per bottle label.Poured into a 1/2 liter stein a clear rich deep bronce with a large two finger fluffy crown that spit and spattered slowly declining into a a froth.A great as the looks were the aromas were pretty plain,light toast and buttery/caramel notes and that was about it.Clean and spicy on the palate wich was a little odd for the style,this has a hefty dose of noble hops,it could use a little more sweetness but it's a bit of a different take.The alcohol sweetness comes into play as I drink more but still not over the top sweetness.It's different but it's actually pretty good,another Epic beer that I like more than most everybody else.

I love the dark reddish caramel appearance of this beer in the goblet. The aroma is bready, malty, predictable for the style.

Tastes sweet, lots of fresh malty grain, a touch of toast. Aftertaste lingers a bit, leaving traces of sweetness and a nip of hop balance.

Smooth on the palate, very easy to drink. Cheers to those enjoying Bockfest weekend here in Cincy this weekend!

22oz bottle, release #1. Pours light brown with a smallish frothy off white head that quickly goes to a thin film that leaves a little lacing.

The aroma is grainy chocolate and toasted caramel malts with some acidic hops.

The flavor is sweet grainy chocolate and toffee malts with a little dark fruit and some hops that lead to a dry finish with some alcohol. As it warms, some leathery notes come out. The mouthfeel is medium bodied with low carbonation.

Smells mildly sweet with lots of caramel and a herbal and soapy hop aroma. Mild nut and coffee aromas.

Overall an OK Doppelbock. This is a bit sweeter than I like.

22oz. bomber bottle with a simple black and white recycled paper label. In the middle of the black part of the label are two not so scary skulls. Above the skulls in big gray letters is the name of the beer. Directly to the left of the skulls in big ass bold white letters is the brewery's name. The white part of the label contains the mandatory US info, brewery's address, and a small box that contains the release number and ABV%. This bottle was release #2 and has an 8.5% ABV. An average consumer wouldn't know how old release #2 is.

When poured into a Paulaner Salvator Pilsner glass, this "deathly Doppelbock" was a semi hazy dark amber with some brief orange highlights along the sides. The head of foam was about 1/2 an inch in height and dirty white in color. This dirty white head of foam had decent retention that only left behind a skinny string of rings and one tiny blot of lace. The head of foam wasn't much to write home about, but I really liked the color that this Doppelbock had.

Up front this Doppelbock was all about the lightly roasted malts. Behind the malt wall was a whiff of week old wheat bread, a speck of dark chocolate, a drop of caramel, a pinch of alcohol, and a gentle touch of roasted coffee beans. When its swirled around, this beer had a hidden surprise. The aroma will be less malty and the lack of malts will leave a void which will be filled by fruits. It was hard to pick out the fruits. It was just a big jumble of fruits.

The taste was just as malty as the aroma except for one small thing. These roasted malts tasted like they were soaked in alcohol after they were roasted. In fact, everything tasted like it was soaked in alcohol. After the alcohol dipped malts, in comes a dash of dark chocolate, a drop of roasted coffee beans, a speck of sweet caramel, and a pinch of black cherry. After all that, this beer then finishes up with a bitter grapefruit alcohol taste. It was a little weird. The alcohol couldn't help itself. It even coated the citrus hops with alcohol. Long story short, the taste loved the alcohol.

This was a medium to full bodied Doppelbock with a good level of carbonation and a full flavored aftertaste. It's too bad that the main flavor was alcohol. The alcohol was kind enough to let a few flavors out in the aftertaste. My tongue received roasted malt, dark chocolate, and citrus hops. The aftertaste liked the alcohol a little too much for me.

This Doppelbock had too much alcohol in the aroma and the taste. If the alcohol let go of its power just a tad and let more roasted elements come through, this would be one hell of a Doppelbock. Would I buy another bottle? Yeah, if I wanted an alcohol based Doppelbock. I don't usually ask for those.

I love doppelbocks...at least good ones. This one seems to fall victim to the same things most other American ones do, though.
Looks pretty good. A good amount of foam, clear lacing, is the right dark cherrywood color.
However the flavor profile is pedestrian. Malty sweet, but not really bready, or caramel-like. More like just syrup. There’s a little chocolate and some rummy fire. While doppelbocks should have a kick, that’s really all this one seems to have. It’s not horrible or anything, but it wasn’t my first beer of the evening and I couldn’t help but think about how strong it tasted. There’s a certain depth and control a good DB should have, and this one really doesn’t.
I split this bottle and it took a while to finish.
Not sure what I paid for this, but I would’ve been better off getting some German ones instead.
There's a certain mystery to getting tons of depth from a strong lager and this beer didn't get it right.

A bit of a boozy aroma, strong dark fruit that has past fermentation early stages. Light baked caramel and cocoa. Mostly boozy though

Flavors are better as the booze subsides. Still the dark fruit (red plum, raisin, some caramel) are a bit harsh. The sweetness just isn't there. The booze thins this beer out and the structure weakens. Slight spice and hoppy grass in the finish.

A pretty good take on the style, not upper tier by any means...

Picked this one up at Bier Thirty.... Shared tonight with Inflatablechair... Thanks for having me Sammy.... I needed it.

Pours a slightly hazed amber.... the head is off white but with a persistent retention and okay lacing.

Nose is pretty good... nice deep toast and some nice caramel... I think maybe hops are there, but I could be lying to myself.

Flavor actually has some hop bitterness that helps balance the malts.... light caramel and more toast... a bit nutty... again, I swear I get of grassy hoppiness... With warmth I picked up a bit of fruity esters... not exactly "clean", but pretty good on a tough style to do right.

Body is medium... carbonation seems about right, but is definitely "big bubble"...

This is a pretty good first attempt... I will rereview with further batches... a lager of this ABV is a bit of a challenge, and this is a nice jumping off point.

Bomber, served in a Tyranena snifter

A - pours a dark copper, clear, fades to zero head

S - biscuit and caramel, a bit of subdued hops follow

T - sweet, but not overly so, caramel up front, hops are more present here than in the nose

O - good value, certainly a solid dopplebock, nothing earth-shattering. Won't necessarily seek it out, but would happily have it again

Has a tall, tan and bubbly froth. Color is dark brown. What a looker it is too.

Goes down medium and fairly smooth with a slim alcohol heat.

Epic has been treating me pretty good as of late.

A: This poured a nearly opaque light mahogany with some light tan head.
S: It smelled like bready and nutty malt, with some earthy copper hops and oak and sweet toffee.
T: It tasted like sweet caramel and earthy nutty malts, with some oak and copper hops. It had a clean earthy and sweet aftertaste with some alcohol warming.
M: It was thick with moderate carbonation. Nice full body.
D: This was a nice doppelbock with simple but enjoyable scent and taste. The body was great, but the finish was hot, so it was better to sip. Actually seems like it could improve with a year or two in the cellar. Fresh is good, not great.

This is an okay doppelbock. Strikes me as quite boozy. Though, the characteristics are there that you'd want to see for the style. It's okay, but there are definitely a lot of wrinkles that need to be ironed out in order to make it a decent interpretation.

Double Skull has a redish brown color with great clarity and creamy head. The head settles quickly and does not leave any lace.

Aroma is mild and sweet with a slight fruity quality.

Flavor is much more pronounced with a big toasted malt body, strong bitterness, and a drying, alcoholic finish. Not as complex as I had hoped, this beer seems a little bit one-dimensional.

Mouthfeel is medium-plus in body and slightly over carbonated.

Overall a solid beer but one that may benefit from further cellaring. As it stands, a little too strong and lacking in character.

Poured into a German mug at 43 degrees. A vigorous pour produced a one finger head with fair retention. The light tan head is creamy and foamy. The color of the beer is SRM 18 an amber brown color with excellent clarity.

Toasty malts, caramel, and Maillard products in for the initial aroma. Additional aromas are earthy, bready, fruity, and floral.

The mouthfeel of the beer is chewy and smooth. A medium-plus body, medium carbonation, and a medium-plus finish.

This doppelbock weaves the high alcohol intricately within the huge malt profile. The Maillard product is not overpowering. Epic has crafted a well-made doppelbock.