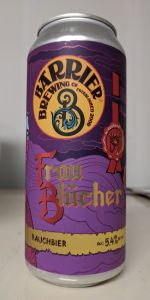 I bought a 4-pack of this at the brewery in December after having one at the taproom. Drinking the last can of that tonight.

Strong smoke aroma and flavor, reminiscent of smoked ham or bacon. Light Pils malt sweetness. Even a hint of peat.

This is an awesome rauchbier. Really wish more brewers would take on the style, and do it proper justice like Barrier did here. I could drink this all night long.

After getting hopped out this beer is a palette cleanser of smoked meat and wood. Pair with a peaty scotch like Ardbeg and a fat cigar.....maybe some beef jerky.....

I can hear the horses winnie from here as Frau Blucher enters the fray....

A: The beer is clear yellow in color and has no visible carbonation. It poured with a quarter finger high head that died down, leaving a patch of bubbles in the center and a thin collar around the edge of the glass.
S: Light to moderate aromas of beechwood smoked malts are present in the nose.
T: The taste mostly follws the smell and has flavors of smoked malts along with notes of Band Aids.
M: It feels medium-bodied on the palate and has a moderate amount of carbonation.
O: This beer isn't too difficult to drink because the smoke is not overpowering, but novices might not be able to get past the Band Aid flavors.

Had this on tap at Pacific Standard in Brooklyn.

It poured a yellowy gold color with basically no head. Nothing special stood out but then the smell hits. A light, flavorful smoked flavor arrives. It's like walking into an Italian meat market. A delicious fragrance of capicola and sweet sopressata. The taste was rather unique as well. A bit of a hickory flavor starts off.

Overall this beer was different, but in a good way. I get over the fact that felt like I was drinking a Italian meat platter and enjoyed this beer very much.

Had a glass of this on tap at The Farm on Cortelyou. I'd had a few of the Barrier beers at Bierkraft a few weeks back, and so was pleasantly surprised to see this while grabbing dinner with the lady.

The appearance was quite nice: a light faint hay yellow. Very striking. There was a nice foamy head, although I will say that dissipated fairly quick. Minimal lacing.

Actually, the smell was of a faint smoke, but it was there--just kind of smelled like a wet field, near a campfire: wet hay, some smoke, and also a hint of sweetness.

Taste: Very nice smokiness: doesn't suffocate you like most other smoked beers, and I thought it balanced well with the other flavors. Caught more hay, but also some sweetness from toasted malts, very contained hop presence. Also detected a nice citrus balance, but understated.

Mouthfeel: Light and bright, and well-carbonated so as to be very smooth on the palate.

Overall: Great beer. I had some pulled pork app (roasted, not smoked, but still) and the beer went very well with it. On the whole, while this was clearly a rauchbier it had more flavor and balance than most that I've seen, which tend to hit you over the head with smokiness (fine by me as I like that flavor, but they're often very one-note). This was a great beer that could pair well with a ton of foods with the backgrounds notes but also was lighter and refreshing. I'd definitely try it again.

Poured a brassy hue with a two finger foamy white head. There was good retention and lacing.

The smell featured a soft hardwood smoke atop a grainy malt.

The taste was well balanced with a pleasant smoke dancing on the palate. The grain bill was solid with a cleansing herbal hop.

The mouthfeel was clean and a touch grainy.