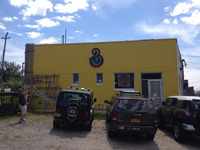 4.17/5  rDev -4.4%
vibe: 4.25 | quality: 4 | service: 4.25 | selection: 4.25
Stopped at Barrier for the first time on a Sunday afternoon before a concert at Nassau Coliseum. Located in an industrial-ish area right up against the train tracks. Parking is kind of awkward but there is a decent amount available on the street.

The space is inside is bigger than it looks from the outside. Very chill, laid-back vibe inside with music playing and a tv showing a football game. Friendly bartenders, who were both attentive and happy to chat about the beer, added to the vibe.

About 10 beers on-tap with a surprisingly large selection of cans available to drink at the bar or take home, around 15 different beers or so. Many of which were priced around $5-6 per can to drink at the bar or $10-12 per 4-pack to take home. Hard to beat that! It was kind of odd seeing more offerings in cans than on-tap at a brewery, but nice to have such a wide range to choose from to bring home. I had their Classic (Belgian witbier) and Hood (nitro milk stout) on-tap and a can of Frau Blucher (rauchbier). All were tasty with Frau as the clear cut winner. I bought 4-packs of the Frau and Le Pete (peat-smoked Belgian wheat) to go.

Cool place that I would definitely stop at again. About a 20 min drive from Nassau, it makes a good pregame option, especially to fill growlers or pick up cans before a show or game.

Rated by DonnieHops from New York

Reviewed by Wesmaze from New York

Rated by Act25 from New Jersey

Reviewed by NickandToni from New York

4.37/5  rDev +0.2%
vibe: 4 | quality: 4.5 | service: 4.25 | selection: 4.5
Consistently very good beers, especially their IPA's. The place can get pretty packed so I prefer coming here on slightly off hours when the service is more friendly and you can have a conversation with the bartenders. Dog friendly and their is usually a very good food truck on location.
May 27, 2017
Rated: 4.34 by VonZipper from New York

Rated by Beerwoman92 from New York

Reviewed by BeerIsland51631 from New York

Reviewed by PsilohsaiBiN from New York

4.5/5  rDev +3.2%
vibe: 4.5 | quality: 4.5 | service: 4.5 | selection: 4.5
Barrier was recently voted the #3 brewery in NYS and there's a simple reason why: they brew a vast style of exceptional beers. The tasting area is on the smaller side and literally 15 feet from the train tracks, and you will figure this out soon enough as every train passes by and shakes the whole place, and your brew. I wish it was closer to my house, I'd be there a lot more often. They survived Hurricane Sandy and are better than ever...I wish them well.
Jan 17, 2016

4.07/5  rDev -6.7%
vibe: 4 | quality: 4 | service: 4 | selection: 4.25
I visited Barrier Brewing during a trip to Long Island. It was nice to find a brewery in the East Rockaway / Oceanside area. They have a good line up of their beers. They offer 10oz pours or flight of 5 smaller pours., which are reasonably priced. The service was good. The environment was friendly. Food was available from a food truck outside.

Definitely worth a visit, if you are in the area.

Reviewed by frankrizzo from New York

4.64/5  rDev +6.4%
vibe: 4.5 | quality: 4.5 | service: 4.5 | selection: 5
Finally made it out to Barrier. Kind of a scrappy place that has a warm vibe once you're inside. Great selection of brews, all well made and never less than solid. Definitely worth the trip and one of NYC's best breweries even though they are technically in Nassau County.
Mar 01, 2015
Barrier Brewing Company in Oceanside, NY
Brewery rating: 3.98 out of 5 with 5176 ratings