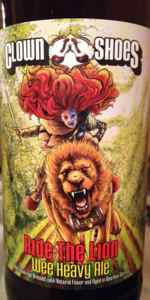 Reviewed by imscotty from Massachusetts

Appearance: Pours golden brown, a flash of foam that quickly fades, some lacing. There was a fair amount of sediment at the bottom of the bottle - it did not bother me.

Taste: This is a hot boozy sugar daddy. Caramel overwhelms. malt and bourbon too, has a long hot boozy finish.

Mouthfeel: Not a viscous beer, but it coats the mouth and it stays. Long, long finish. A nice sipper on a cold winter night.

Overall: I thought this beer would have legs, and it did. At this age it may have lost some of its complexity, but if my memory is correct I thought it was too sweet when fresh so I prefer it aged. What I appreciate most in the beer is the lingering, burning finish. Might not be to everyone's taste, but I consider this beer a good value.

At this point this beer is flat as a pancake. Not particularly good looking either. Nose is brown sugar, molasses, and a very mellow booziness. Decent but muted. Beer opens brown sugar, molasses, and maple syrup. Notes of toffee and the slightest touch of booze in the middle mixed with more maple and a sprinkle of dried leaves. More brown sugar with a tickle of oak at the finish. Unbelievably good at this point. Body is medium to full with low carbonation. Smooth and chewy on the palate and goes down filmy with a lingering aftertaste. So drinkable at the ABVs.

Too bad it takes 6 years for this beer to get to this beer. Taste and feel are phenomenal.

3.89/5  rDev -4%
look: 3.75 | smell: 4 | taste: 3.75 | feel: 4 | overall: 4
Typical wee heavy body until the lighter top half and the white ring. Bourbon, toffee, slight smoke, wood and a kiss of vanilla make up the aromas. Taste is the same of the nose but very hot with booze. Medium body with hot booze and smooth malt. Good but not great, get the booze under control and more peat smoke to unlock the potential
Apr 17, 2020
Rated: 4.36 by StephenBechler from Illinois

L: Cloudy copper brown pour with a finger of fizzy white head. Falls fast... modest lacing. I do like the bottle artwork.

S: Caramel and malts mixed with bourbon. Best part of the beer.

O: Lacking in flavor... I guess I expected more, but the malts/brown sugar/toffee didn't live up to the bourbon which dominates the brew. Very much a poor man's 'Backwoods Bastard'... and it's not terribly close. Not one I'd pick up again.

4.34/5  rDev +7.2%
look: 4 | smell: 4.25 | taste: 4.5 | feel: 4.25 | overall: 4.25
From the 22 oz bottle in a snifter. This fantastic ale pours a
luminous ruby tinged mahogany with a nice head of off white foam that
subsides to a thin ring with light lacing. Nose of bourbon, light smoke,
peat, vanilla, oak, and booze with subtle orchard fruit notes. Flavors
nail it for the style---bourbon; big and rich. Oak and vanilla marry with
brown sugars and peat smoked malts with touches of brandied apples
and figs with a hint of zesty hops on the rear in between the layers
of warming bourbon. excellent mouth feel; medium body, light carbonation,
smooth, rich, warming, and finishing faintly dry.

The Clown folk know their stuff----this one hits the mark!

Seek this one out!

Reviewed by ChrisMon02 from Ohio

Sweet bourbon, malt, smoke, Red Apple skins, berries, peat and vanilla on the nose and palate. Quite complex and delicious.

Very smooth. Subtle carbonation and although chewy, not difficult to navigate through. Some warming in the chest but not hot at all.

Reviewed by stephens101 from Oklahoma

There will always be a place for the classic styles that lie on the sweeter end of the spectrum in my fridge. And this one will be at the front of the line.

L: Poured from a bottle to a pint glass. Had a dark amber color and a mostly clear consistency. There was a quarter inch of foamy, off white, somewhat long-lasting head. Very good lacing.

T: Tasted of a moderate amount of sweet malt (present throughout), a good shot of bourbon (and its accompanying barrel), some caramel, a tinge of vanilla, and a bit of toffee as well. This is a much more subtle flavor than expected, but still rich. It has a certain booziness to it, but it's not excessive. It's quite sweet and tasty.

F: A fair amount of carbonation with a slightly slick, yet warm finish. Medium-bodied.

O: A solidly made scotch ale. Worth a look.

Rated by WOLFGANG from South Carolina

Reviewed by charlzm from California

Beer is a very deep brown with dark garnet highlights. A two-finger light tan head of dense, creamy foam slowly recedes to a crown around the rim.

Aroma is boozy and metallic. Sugar cane and vanilla notes are in there as well.

Flavor is very sweet with melanoidin characteristics in the finished. Only mildly bitter. Cane sugar, vanilla, and some woody notes round out the palate.

Mouthfeel is slightly thick, a little creamy, and hot with alcohol. The time spent in the cellar did nothing to mellow the booze bite. Or maybe it did? The mind boggles.

Overall, not one of the best wee heavy ales I have ever had. Certainly drinkable.

3.98/5  rDev -1.7%
look: 3.25 | smell: 4 | taste: 4 | feel: 4.25 | overall: 4
June 2014 bottle, and I have low expectations relative to when I had it fresher. Now pours a murky light brown, with a smidgeon of light foam that quickly dissipates. Smells a bit tangy from oxidation and barrel oak, along with brown sugar, spiced apple cider, and amaretto. The taste still has a nice malt backbone but also has a hint of tartness to it, suggesting it has passed its prime.

I still have one more bottle, which I'm planning to open alongside bottles of the base beer, Royal Standard, and a cognac-aged version, Ride the Wendigo. Shame that they can't all be fresh at the same time, but it should make for an interesting tasting.

Reviewed by brewskis from Indiana

Taste starts with rich carmel and brown sugar sweetness along with dark fruit and bread. The barrel presence makes itself known mid-palate and brings oak, bourbon, and some vanilla. The bourbon barrel and dark fruit flavors intensify into the finish, but some (what I would guess is) oxidation also creeps in. It's an astringent metallic and tangy note, almost like a sherry flavor. Pretty dry finish given it's sweetness up front.

Overall, this would be a solid barrel aged wee heavy if it wasn't for the weird tangy finish. Not sure if this is oxidation (which I can't really blame on them) or if this was an intended flavor. As it warms, this flavor starts to fade a bit. Decent stuff.

3.49/5  rDev -13.8%
look: 3 | smell: 3.25 | taste: 3.5 | feel: 4.25 | overall: 3.5
May 2014 release opened 1/15/2016, so this has aged on the store shelf for 18 months or so. Consumed about half the bottle. Stoppered the rest, consumed it on 1/16. Dark, orangish, muddy, hazy. The look is not particularly attractive. Little to low carbonation. 1 inch cream-white head after a vigorous pour that fades at a moderate rate leaving some lacing, ending in a ring with bubbles. Aroma dominated by whiskey with sweet malt. Hints of dark fruits, earthy, but it mostly smells like whiskey. Substantial to thick mouth feel. Smooth initial taste, malty, but transitioning quickly to whiskey. It is hard to pick up the more subtle flavors of the beer due to the dominance of the whiskey flavor. Stong whiskey aftertaste with alcohol warming in the back of the mouth and the breath. The overall impression is a sipping whiskey, not a beer. Tasty, just like a smooth, but thick, bourbon. But if you are looking for malts and hops, this is not the beer you are looking for. I have no idea how to rate this beer, since I have no baseline, so mostly I'm rating on my like/don't like scale. But, it seems to me they overdid the barrel aging flavors.
Jan 17, 2016
Rated: 3.73 by griffey123 from Connecticut

T- sweet caramel & toffee malt with notes of raisin & fig. Plenty of bourbon on the mid palate with woodsy notes and barrel juice, more bourbon on the linger