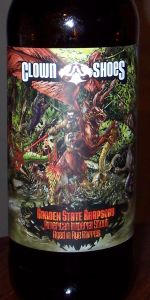 Notes: From the depths of the Pine Barrens of NJ, the Jersey Devil joined forces with Crasher to annihilate snake demons and bring balance to the Garden State. We blended 12 rye barrels of Undead Party Crasher Imperial Stout with 3 rye barrels of an experimental barley wine ale to create this NJ-exclusive beer.
View: Beers | Place Reviews
Reviews: 20 | Ratings: 107 | Log in to view all ratings and sort
Reviews by threeviews:

A - It pours mostly pitch black with some faint, ruby-red highlights at the sides of the glass. A semi-aggressive pour yielded about 1/2-finger of mocha colored head which dissipated rather quickly. Not as dark as some at this ABV, but classic Imperial Stout nonetheless (4.75)

S - The aroma is fantastic. Every element of the beer is showcased in the nose: Chocolate Fudge, Dark Fruits (Plum, Cherry, Raspberry), Vanilla, Coconut, Charred Oak and Rye Whiskey are all accounted for. The blend between the Undead Party Crasher Stout and Barleywine is decadent. (4.75)

T - The complexity in the nose is blissfully embraced in the flavor of this cuvee. Dark Fruit, Chocolate, Rye Whiskey, Vanilla, Coconut and Charred Oak (in that order) waft across the palate in harmony with no one flavor winning out...each sip seems to showcase a different personality. (4.75)

M - Medium Plus...not as chewy as other Imperial stouts of this nature but certainly coats the palate. Soft carbonation gives ample time for the beer's flavors to seep into the taste buds and linger. (4.75)

O - I thought Extremely Angry Beast was an outstanding blended, barrel-aged beer, but the complexity is significantly greater with Garden State Rhapsody. The balance Clown Shoes was able to achieve between Stout, Barleywine and Rye Whiskey Barrel is a celebration of both their brewing prowess and barrel-aging skills. They certainly have provided us New Jersians with something to celebrate! (5.0)

Clown shoes absolutely nailed this one. Just shy of total darkness. Nose is chocolate, rye whiskey and almost a slight cherry sweetness. First taste blew me away. Perfect combination of slight smokiness, earthiness, chocolate, rye whiskey. Mouthfeel is perfect. Not too thick, not too thin. Booze is basically undetectable even at a 55 degree room temp. Great mix of chocolate rye sweetness and slight bitterness on finish. I've had a lot of stouts and BA stouts and am not saying this lightly when I say it's in the top 5 that I've EVER had.

Garden State Rhapsody is a very special crafting just for my beloved home state of New Jersey, being the first beer made just for us from an out of state producer. As if this wasn't enough, the premise of this brew is so unique in that it is a blend of 12 barrels of Undead Party Crasher and 3 barrels of barleywine... all rye conditioned... I really haven't heard of anything quite like it! Onto the scores - in the looks department it's spot on, with an inky black color and a nice ring of coffee colored foam... like the bloom on french press coffee. The lacing on the glass is elegant as well... a great visual! The aroma seems like a wondrous preview of what is to come... Big on rye grains and roasted malts with a pleasant smokiness. After taking in the flavor for a while at the proper temperature, here's what I have to say: It can hang in an arena of the biggest heavyweights of barrel aged beer! The overall picture is that it is an unlikely trifecta of smoky stout goodness, lush rye whiskey, and a delicate inclusion of barleywine hoppiness. It's this third aspect and the particular choice of rye for the barrel that really drives it home. The matchless balance of this menage is uncanny! Undead Party Crasher is one of my favorite Imperial Stouts due to the precisely appropriate smokiness, and that comes through here loud and clear. In my opinion, rye is also the best thing to happen to beer in modern times. I'm not sure anyone's ever blended barleywine into the mix like this but I can assure you it is a success of flying colors. Also notably remarkable is the mouth feel and finish, not unlike a strong oatmeal stout... velvety, substantial, and lingering. A fair bit of cocoa and coffee notes come through in the end here. Garden state residents and beer traders.. get your hands on this beer ASAP- it is truly a work of art and a showcase as to what Clown Shoes can do!! Jersey Strong.

There is a slight tinge of crimson in the pour but the liquid rests in the glass almost pitch black. A finger and a half khaki head fades slowly to a thick collar with a few whisps accross the surface. Sparce, spotty lace.

A big dose of whiskey presents on the nose backed by smoked malt, vanilla, caramel, oak and a vaguely floral note. Smells great.

The flavors here are bold and rich. Chocolate fudge, sweet and spicy rye whiskey, tart raspberries, vanilla, caramel, smoked malt, brown sugar, cough syrup (in the best possible way), a bittersweet vegital note and a modest booze burn. The flavors of the base are apparent but the barleywine blending and rye whiskey barreling change it much more dramatically than the other barrel treatments I've tried (rum, bourbon & cognac). All-in-all this is delicious.

Clown Shoes continues to prove themselves a force to be reckoned with. Garden State Rhapsody takes Undead Party Crasher to delicious new heights. I really enjoyed the new direction imparted by the blending and rye. Based on their performance here I will continue my endeavour to try all of Clown Shoes' state-specific one-offs. Try this one if you can!

The mouth feel on this is awesome! A hint of sweetness from the Barleywine, really smooth and drinkable, can't wait to grab a few more bottles!

Nice half inch head dissipates rather quickly down to a thin ring.
Nose has a bit of Rye whiskey to it.
Taste has some pepperiness from the Rye barrels as well.
Feel is a tad thin.
Overall this was a nice surprise in an IP trade.

This is the best BA beer I've had so far from Clown Shoes. The feel is relatively thicker than others, and the rye barrel comes
through nicely. If you like rye, you'll love this beer. It's warm, smooth, smokey, earthy, and roasted.

Another great barrel-aged offering from Clown Shoes. The aroma is fantastic, very-well balanced and full of flavor. A little thinner on the mouthfeel, but overall a great brew. Very highly recommend, cheers!