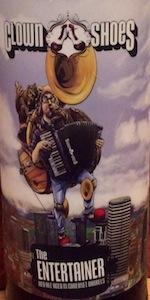 Reviewed by crob3888 from California

4/5  rDev +3.4%
look: 4 | smell: 4 | taste: 4 | feel: 4 | overall: 4
A chestnut colored poured with an off-white head that leaves lots of lace. Aromas and flavors are of big dried fruits, caramel malts, some alcohol warmth, and an assertive hoppiness that leaves a bitter finish. It's a big boozy hoppy red, taking on qualities of a fresh American barleywine or imperial red.
May 30, 2016

This brew pours a murky, medium orange-brick amber colour, with four chubby fingers of puffy, loosely foamy, and fairly bubbly beige head, which leaves some stringy collapsing cloud lace around the glass as it slowly sinks away.

The carbonation is adequate for the huge balancing act of a job it has here, via its stern, no-nonsense frothiness, the body a solid middleweight, and mostly smooth, just a wee bit of tacky alcohol trying to get into the party before its time. It finishes surprisingly dry, the malt not shirking its duties, but rather the acerbic red wine and lingering spicy hops overshadowing it, almost completely.

Wow, I was expecting some kind of overly-sweet, Imperial Red Ale meets big-ass fruity Cali wine joint, but thankfully, that is not the case here. They've upped the ABV to table wine levels, but you wouldn't know it (yet, of course), and the base ale provides a decent foil to the heady, if strangely reserved Cabernet character. Good, good stuff, overall.

Reviewed by Nickcal from Rhode Island

2.59/5  rDev -33.1%
look: 4 | smell: 3 | taste: 2 | feel: 3.25 | overall: 2.5
This, I regret to say, was a drain pour. I haven't done that in a long time, but the mix of flavors on this one killed me. I'm a big fan of Clown Shoes and everything they do but this was my least favorite beer they've created. Look, smell and mouth feel were all okay in my book, the taste is where it fell off. I do love a glass of Cabernet from time to time but the mix of this with simcoe hops (which are my favorite hops) was awful. It created a boozy red wine flavor that was very unsettling. Just not a good combo, but proud of Clown Shoes none the less for pushing the creativity.
May 22, 2016

A: Dark, dark red pour. Very large and dense tan head. Quite excellent head retention with some thin sheets of lacing left behind.

S: Huge red wine aroma right off the bat. Loads of berries. Quite a bit of citrus and a little herbal component pokes through, I assume from the hop aspect. Lots of sweet maltiness, caramel primarily.

T: Huh. Not even quite sure how to describe this. Up front there is an immediate heavy berry flavor combined with a sharper citrus and herbal hop component. It melds surprisingly well. Quite sweet berries to boot, backed with loads of maltiness (heavy bread and caramel). Quite bitter and dry in the finish with a nearly tart berry aspect now. Aftertaste is all Cabernet.

M: Big, heavy, sweet and yet somehow dry at times (hops and wine contribute I assume). Not boozy at all.

O: Interesting brew. It's actually pretty much what you'd expect. It tastes like a giant hoppy red ale aged in red wine barrels. Period. Wine flavors are strong and pronounced, it would dominate if it weren't for the 12% dry-hopped red ale underneath (that sometimes barely pokes through). Hard to score, especially since I'm not a huge fan of any wines but this feels like it somehow pulls it off.

Pours a nice frothy creamy 1 finger head that sticks around for a while, great lacing too, dark hazy iced-tea mahogany brown color with a maroon-ish hue.

Nose has some sweet caramel malt notes, a little toasty and toffee candy, with some yeasty aromas and ester profile, touch of booze, followed quickly by spicy hops that seem like it will be super hopped, but all drowned by loads of barrel, some woody esters, raw oak, a big earthy red wine sweet vinous juicy candy notes, a little fluffy nougat candy with the caramel as well.

Taste is similar, out front is a spicy hop character again, thankfully not super aggressive in bitterness, a slight chewy earthy spicy hop profile. Then into malts, softer malts than I expected, reddish candy malts, with a little toasty component, plenty more caramel and that red candy on a candied apple, with a little toffee as well, later gets a touch of fluffy candy nougat and chewy caramel candies. Malts are fairly sweet with a touch more yeasty note and some esters, with a touch of warming booze and maybe even a hint of phenols in the background but that could be the barrel. the barrel is loaded with flavors, more woody esters like saturated wood dust, some toasted oak, raw oak with a nice toast to it, a little red wine and vinous sweet earthy red wine. Finish is a touch sticky sweet, plenty of earthy spicy hops and fair bitterness, a little more sticky caramel and vinous earthy red wine.

Mouth is med bod a touch syrupy and soft, much softer and lighter than I thought, creamy almost, with nice fluffy carb, surprisingly quite nice with that soft creamy thing and not heavy syrupy.

Overall pretty nice, some great components, but some flaws as well, the mouth was not what I expected yet was great, wine barrel was very nice too both the wine and the barrel, but the sweetness didn't go as well with the cabernet flavors, and the spicy hops were a bit in the wrong direction and too much, but thankfully not super bitter. Booze was hidden fairly well, and the malt flavors were pretty nice.

The taste mirrors the aroma with stronger character: deep oak, wine, and chocolate.

The flavor is intense.

This is the best beer I have tasted aged in Cab barrels. Other beers have missed the mark.
They were too winey. Not only did Clown Shoes nail the style, there is an intense depth of aroma and flavor which seemed to be missing in other attempts at aging in Cab barrels.